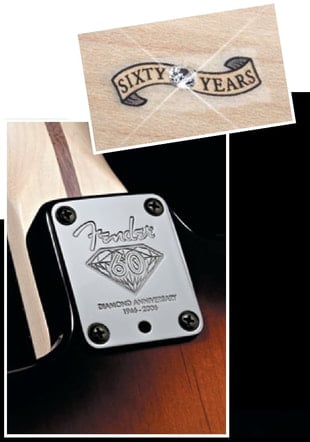 The 60th anniversary of Fender in 2006 was celebrated with a pair of concerts in Tempe, Arizona, attended by John Mayer, Eric Johnson and Jeff Beck.
For the occasion, Fender applied a commemorative medallion on the back of the headstock of the factory guitars and introduced three Anniversary strats, one made in U.S.A, one made in Mexico and one by Custom Shop.
The 60th Anniversary American Stratocaster, fabricated in Corona, had a 3-Tone Sunburst polyurethane finish and was easily recognizable for the "Sixty Years" decal with a zirconium; it was equipped with three American Vintage Strat pickups and the Delta Tone System and had a commemorative neck plate.
The Mexican 60th Anniversary Standard Stratocaster had a Blizzard Pearl polyester finish and commemorative neck plate, and was equipped with three Tex Mex pickups.
On both guitars, but also on all the other 2006 factory Stratocasters, a commemorative medallion was applied on the back of the headstock.
The Custom Shop also celebrated the anniversary, unveiling the 60th Anniversary Presidential Select Stratocaster, made in a limited edition of 100 units and sold together with a set of wine bottles (82% Cabernet Sauvignon and 18% Merlot) produced for the Custom Shop in Yountville, California, by the Hill Family Beauterre Vineyard and stored in a container manufactured in Ensenada on which an abalone, rosewood, maple and ebony inlay of the Fender Custom Shop Limited Edition logo.  The main characteristics of the guitar were the selected flame maple top, hand dyed by using the grape must of the Hill Family Estate, the golden hardware, the three Custom Designed single coils and the mother-of-pearl inlay at the twelfth fret depicting the anniversary logo.
Antonio Calvosa
​
The 60th Anniversary Presidential Select Stratocaster (prymaxe.com)