2014 had been the 60th anniversary of Fender Stratocaster, also called "Diamond Anniversary" and not to be confused with the Diamond Anniversary of Fender in 2006, for which they also produced special models.
On its Frontline Fender reminded everyone of the importance of the Stratocaster, born in 1954, but still very current: “It proceeded to revolutionize popular music as an indispensable tool of phenomenal creativity.  It then transcended that role to become a cultural symbol, too.  It became the whole world’s archetypal electric guitar.  It was the future in 1954.  Sixty years later, in 2014, it’s still the future.  It is the world’s greatest electric guitar.  It’s called the Stratocaster guitar.”  As happened ten years earlier for the fiftieth anniversary of this instrument, Fender decided to celebrate the Stratocaster by making different special models.

60th Anniversary strats made in U.S.A.

The 60th Anniversary American Vintage 1954 Stratocaster was completely dedicated to Leo Fender’s Stratocaster: it featured a two piece side-seam ash body, a flash coat lacquer 2-Color Sunburst finish, polystyrene "short skirt" knobs, saddles with the "FENDER PAT. PEND." engraving, and a 7.25" radius fretboard.  The 5-way switch and the rolled edges maple neck gave a touch of modernity to this strat.   Fender described it as an “exciting new instrument with a tone as new and different as tomorrow.”  Obviously it was available only in 2014 and in a limited edition of 1954 units, whose first 54 had a special neck plate with "1st 54" engraved.  Its starting price, $2,500, was ten times higher than that of the 1954 Stratocasters (but this, given the inflation, shows how expensive, not cheap, the Stratocaster was in 1954). 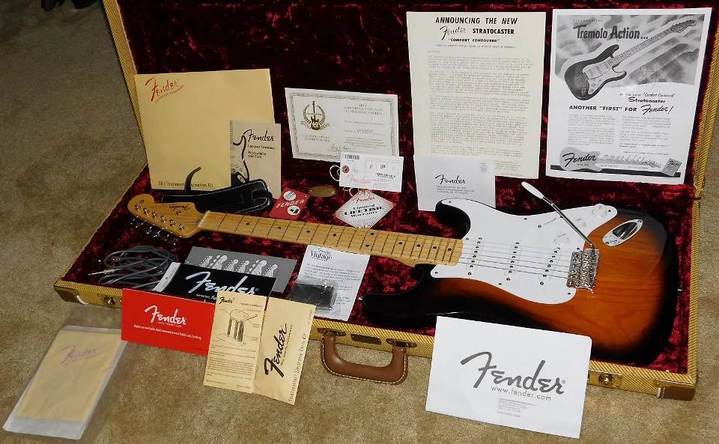 60th Anniversary American Vintage 1954 Stratocaster (reverb.com)
The 60th Anniversary Commemorative Stratocaster was instead a mix of old and new, in which the two tone Sunburst alder body was gloss finished, the hardware golden, the tuning machines knobs pearled, the neck heel “contoured”, and the fretboard radius compound; it had a commemorative neck plate and three Special-Design 1954 Strat Single-Coil pickups associated with the No-Load circuit.  Other characteristics were the Modern “C” shaped neck with micro tilt, the 2-pivot bridge with vintage saddles and twenty-two frets.

The Custom Shop also got busy to celebrate this anniversary: the ​60th Anniversary 1954 Heavy Relic Stratocaster, Time Machine Series, was a guitar that replicated the 1954 Stratocaster.  Its two-tone sunburst body was composed by a single piece of ash with a relic nitrocellulose finish.  The maple neck also was nitro finished and featured a large “U” profile.  However the 9.5" radius and the 6105 frets made it more player-friendly.  Finally its 1954 Single Coil pickups gave it the stamp that resembled the Stratocasters of the '50s and the back plate with the serial number engraved that like they were 60 years ago, in 1954. 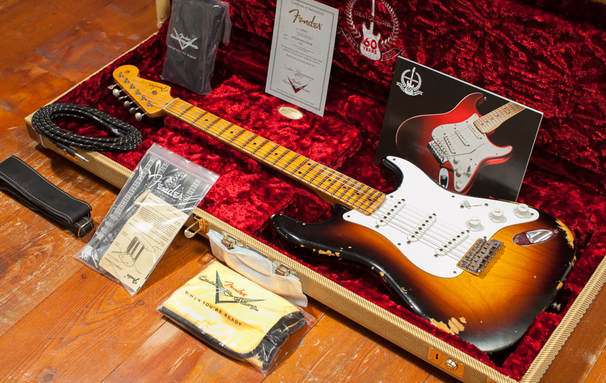 The Custom Shop 60th Anniversary 1954 Heavy Relic Stratocaster (courtesy of Max Guitar Store)
The Custom Shop Limited Collection 2014 Limited Edition Golden '50s 1954 Stratocaster was very similar to the previous one but can be differnentiated by the pickguard in anodized aluminum and by the golden hardware.  It was available in three relic finishes: Cimarron Red, Dirty White Blonde and 2-Color Sunburst.

60th Anniversary Strat made in Mexico

The 60th Anniversary Classic Player ’50s Stratocaster, made in Mexico, was available in Desert Sand nitro finish and featured  a gold anodized aluminum pickguard.  It was reminiscent of the Musicmasters and of the Duosonics from the mid '50s.  The use of aged plastics and the gold plated hardware made it very attractive.  It is interesting to note that in the price list it was advertised featuring an eleven hole pickguard (actually they were eight), and, above all, American Vintage pickups, when in reality its pickups were the Original '57/'62 with RWRP mid pickup. 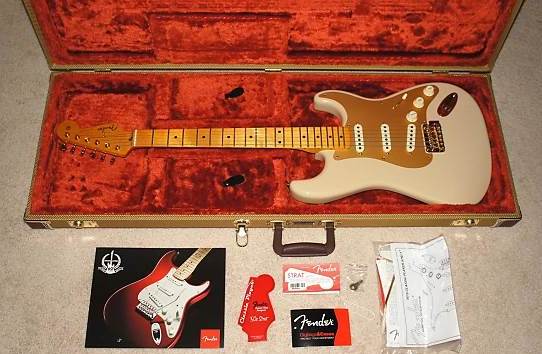 Squier celebrated the anniversary with the 60th Anniversary Classic Vibe ’50s Stratocaster; it featured an Aztec Gold finish and gold hardware.  This was the only 2014 anniversary Stratocaster to have the classic wiring, in which the first tone knob controlled the pickup at the neck, while the second the central one.
Antonio Calvosa
​