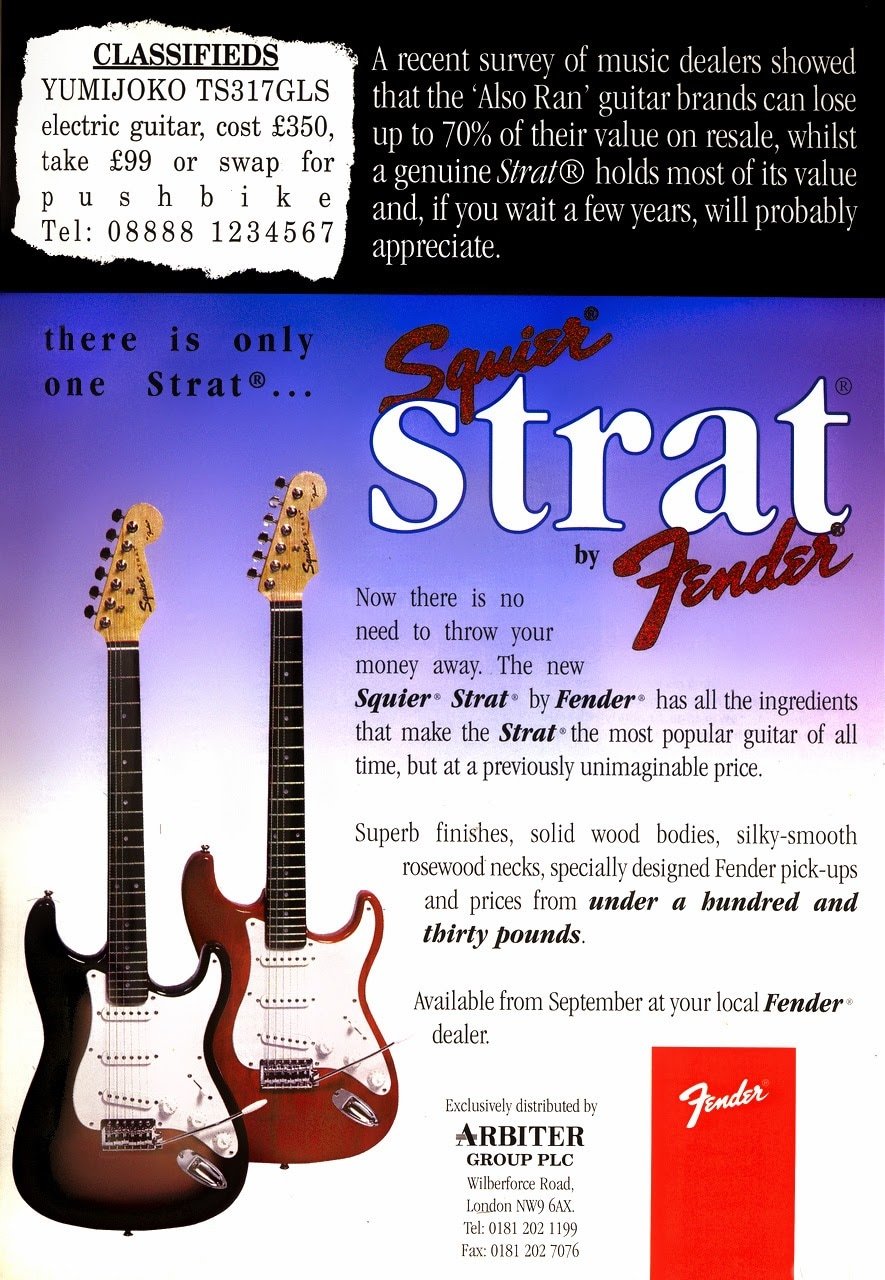 THE FIRST BULLETS MADE IN CHINA

The first Stratocasters made in China appeared on the 1995 price list.  The ​Bullet SRS Stratocaster were not very different from the previous Korean Bullets, with which they shared a plywood body low-quality hardware.  Indeed, at first sight they seemed identical, except for the neck plate that bore the engraving "MADE IN CHINA" and the serial number.
​​ 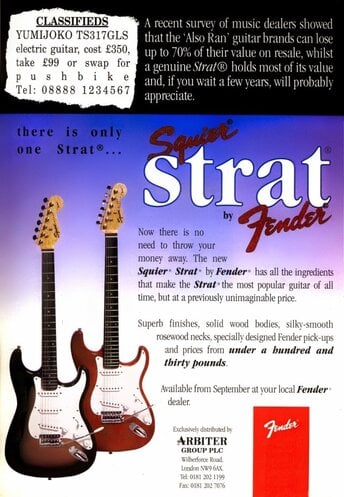 First 22-frets Squier Strats advert
The first Bullets could be considered an experiment: if Fender wanted to relaunch the Squier brand, they should not, at least for now, refer to the cheapest Stratocasters ever, the Bullets.
The new ​Squier Strats cost only $239.99, but above all didn’t have a plywood body like the Bullets and the Korean Squiers.  Fender was never precise about the wood used for the body of these guitars, since declared only "solid hardwood" among the specs, but, probably, it was Agathis (predominantly) or alder (sometimes); at first available only with 22-fret rosewood fretboard and in Black, Torino Red and Arctic White finishes, they had a small headstock with Black Silkscreen Logo, “covered” tuning machines and Synchronous Tremolo with six screws.
On the first Squier Strats the serial number was engraved on the neck plate together with "MADE IN CHINA", just like the Bullets made in China, and started with "NC" or "YN".  Later everything was moved to the headstock.
Of course the quality was still low, due to the materials used, but the level of construction had improved and the price was so insignificant - even lower than that of the mistreated Korean Squiers - that it prevailed in the fiercely competitive low-budget market.
With the new guitar was inaugurated a new series, the Tradition, which in '97 was renamed into Affinity Series.
In November 1998 the series was renewed and the “MADE IN CHINA” decal was replaced by the “Crafted in China” one.  The big headstock was replaced with a small headstock, the fretboards went from twenty-two to twenty-one frets, the new Baltic Blue finish was added and, in Indonesia, the production of the maple fretboard model began.
At the same time, the Affinity series was extended with the ​​Squier Mini, which featured a shorter scale (22.7"), twenty frets, just two knobs (volume and tone) and a fixed bridge.

2000 Squier Mini (reverb.com)
The Standard Series, which in 1998 had been relegated to Mexico for about ten months after the Korean experience, returned to the East with the Squier Standard Stratocaster, Squier Standard Fat Stratocaster and Squier Standard Double Fat Strat models.  This series could be considered a step higher than the Affinity.  The Standards were all characterized by a thicker (45mm against the 40mm of the new Affinities of 1999) "solid hardwood" body (probably agathis and in some cases alder) and, a big headstock with the Squier Gold Logo and die-cast tuning machines, twenty-one frets and Synchronous Tremolo with six screws.

2000 Squier Standard Stratocaster (Courtesy of Paolo Quiresi)
These guitars were all unveiled at the 1999 NAMM.
The new Affinity and Standard Squiers with rosewood fretboards made in China in the Yako plant had a serial number that started with “CY” (China Yako), those made in Dallan Dongfang one that started with "CD" (China Dallan).  The models with maple fretboards were fabricated in Indonesia in the PT Cort plant and had the serial number starting with "IC" (Indonesia Cort).  The Mini was an exception: despite having a rosewood fretboard, it was manufactured in Indonesia at the PT Samick plant, and, at first initially, had the serial number that started with "IS" (Indonesia Samick).

In May 2000 the Affinity and Standard series were updated again with the addition of new finishes and limited editions and with the introduction of a thinner neck, called "fast action", strongly wanted by Keith Brawley, Squier marketing manager since 2000, so that these guitars had a completely different profile from all the Fenders on the market.
The new Squier Affinity Strats had an alder body smaller than the Standard (40 mm) and a twenty-one fret neck.  In 2001 the model with the humbucker at the bridge, the Squier Affinity Fat Strat (that in 2007 took the name of Squier Affinity Stratocaster HSS), was added to this series.  Special editions aside, the new Affinity guitars had only the rosewood fretboard and were made in both China and Indonesia.  Only since 2004 the maple cap Stratocaster, manufactured only in China, returned, while in Indonesia only those with rosewood fretboard were made.
On the contrary, the new Squier Standard Stratocasters had an agathis body (alder for special models and for the Cherry Sunburst finish), a twenty-two-frets fretboard, a big headstock redesigned with the "STRATOCASTER" decal in large letters, and were improved with a Synchronous Twin-Pivot Tremolo bridge and new pickups in alnico, unlike the Affinities that kept the ceramic pickups.

2001 Squier Standard Stratocaster, with the new twin pivot bridge (reverb.com)
In mid-2013 the Affinity series was renewed and relegated to China only and a new Squier Gold Logo, already present since the late 1990s on the Standard series, was applied on the big headstock.  In 2018, due to new restrictions on the use of rosewood, this wood was replaced by the Indian Laurel both for the Affinities and the Standards.
These "basic" series over time was extended with other models: the Standard included the ​Squier Standard Strat-7 Seven String Stratocaster (available in the HSS and in the hard-tail HH versions) in the 2000 catalog.

Squier Standard Strat-7 Seven String Stratocaster (reverb.com)
In 2004 the Squier Black & Chrome Standard Stratocaster was debuted and the following year, the "fat" version was added.  The big headstock, the body and the pickups of these guitars were black, the knobs and the pickguards chrome-plated and for the fretboards a very dark rosewood was use.  These details were designed to attract the younger players who approached the six-string playing heavy metal.  As Justin Norvell, Squier marketing manager at the time, recalls: “Younger players mostly play aggressive music. [...] These guitars are for heavy guys.”

2014 Squier Black And Chrome Stratocaster HSS (source: fender website)
In 2006 the much disputed ​​Hello Kitty Stratocaster was marketed for the Affinity series: designed to attract aspiring female guitarists and, with the effigy of the cartoon imprinted on it, was equipped with only one humbucker and only a volume knob.  The short-scale version, with three single coils and two knobs, was also made. The Hello Kitty ended up in the hands of many famous musicians and bands, such as Dave Navarro, Slash, Green Day and Bloc Party.

Squier Deluxe Series was born in 2004 to create a higher level under the Squier brand.  The first Squier Deluxe Stratocaster had an alder body, available in the 3-Color Sunburst with flame maple top (made in Indonesia) and Antique Burst with quilt maple top (made in China) finishes, and mounted staggered poles alnico pickups.  It was born as a limited edition, but its success was such that its production lasted four years.  It should not be confused with the more recent Squier Standard Strat FMT (Standard Series) with agathis body and flame maple top.
Deluxe Series includes also other instruments, as the Squier Deluxe Hot Rails Strat, born in Indonesia in 2007, with basswood body and three Duncan Designed HR-101 Hot Rails pickups, "for full sound and near-endless sustain", as the catalog stated, the Squier Trans Satin Stratocaster, with basswood body, and the Squier Satin Trans Fat Stratocaster and Squier Satin Trans Fat Stratocaster HH, both with mahogany body and satin or transparent finishes.
Antonio Calvosa
​