And the Noiseless pickups 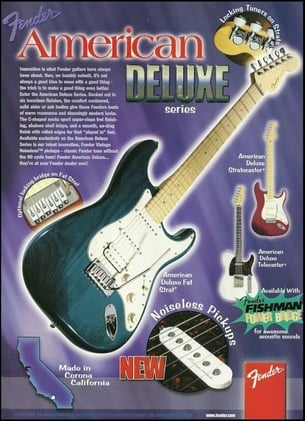 Particular attention was paid to the neck: its profile was made smoother and the fretboard rounded at the edges; as Mike Lewis stated: “We also went with a new, comfortable neck shape, and the rolled edge of the neck, to smooth out the fingerboard/neck joint so it feels nice and worn-in all the way up the neck where your thumb might wrap around”.  Moreover, the neck plate "asymmetrical" allowed easy access to the last frets.
Vintage Noiseless pickups, designed from a 1963 single coil set by the former EMG Bill Turner, appeared for the first time on the American Deluxe.  These pickups were the result of three years of research aimed at combining the advantages of single coils with those of humbuckers: the sound of the first and the silence of the second.  Fender wanted to develop a pickup that could evoke the vintage sound and the silence of the Lace Sensors.  “Initially it wasn't clear at the outset of the project what such a pickup would be, how it would be engineered, but we knew what it had to do,” Dan Smith said.  Each Noiseless was actually made up of two stacked coils, an upper one, which was actually the sound source, and a lower one, responsible for the 60-cycle hum attenuation.  The magnetic bars in Alnico V stretched from one coil to another, crossing the soft ferrous steel spacer plate that fired and isolated them, without touching it.  The spacer plate had mainly two functions: isolate the lower coil from the vibrations of the string, making sure that the sound was picked up only from the upper one, and increase the magnetic flux that passed through both coils, increasing the output of the pickup.
In 2001 the Vintage Noiseless pickups replaced the Lace Sensors on Eric Clapton Stratocaster, while in that same year the Ceramic Noiseless pickups took the place of those on the Jeff Beck signature.  The latter can be distinguished from the previous ones by the presence of ceramic magnets that increased the output of the pickup.  Moreover the poles were not staggered like those of Vintage Noiseless and the logo was in silver italics, unlike that of the Vintage Noiseless that was golden.

Noiseless pickup explained, 1999 Frontline
The first Deluxe Series Stratocasters to be debuted were, in 1998, the American Deluxe Stratocaster, equipped with three Vintage Noiseless single coils, the ​American Deluxe Fat Strat, and its variant with locking tremolo, the American Deluxe Fat Strat with Locking Tremolo, equipped with two Vintage Noiseless, a humbucker Fender DH-1, and a roller nut.  The bridge of the SSS and HSS models was very similar to the 2-pivot used in the American Standard, the only differences being the polished steel saddles and the use of a pop-in tremolo bar.   The bridge of the "locking tremolo" model was the Fender Deluxe 2-Point Locking Tremolo System, (also with pop-in arm), already used in the Deluxe Strat Plus and sometimes called Mini Floyd.

THE AMERICAN DELUXE SECOND SERIES AND THE SNC NOISELESS PICKUPS

In 2010 the American Deluxe Series was revised.  Justin Norvell, at that time Director of Marketing, wanted to redesign completely the Stratocaster, even going against some strongly held principles: “We went so deep into what makes a guitar sounds good, and we had to free our minds from accepted wisdom in some cases”.  In fact, until now, the Alnico V pickups were almost exclusively taken into consideration to obtain a good sound.  However the new N3 Noiseless set was designed to have a different answer based on the pickup type and position: Alnico III at the neck, for a rounder sound, Alnico II at the mid, for a sweeter sound, and Alnico V at the bridge, for a hotter sound.  They were easily recognizable by the silver "N3" logo.
The compound radius fretboard, already used by the Custom Shop, appeared for the first time on a factory Stratocaster with more curve at the nut (9.5") and flatter at the end (14").
The new HSS models featured the new Passing Lane Switch, that allowed to instantly route the signal from any pickup position to the bridge position with the tone circuit bypassed, giving more overtones and a little more volume.
In addition, the new Tungsten Metallic and Sunset Metallic finishes were proposed.
In 2014 the series was revised, and at the same time the American Deluxe Stratocaster HSH, the American Deluxe Strat Plus and the ​American Deluxe Strat Plus HSS were introduced.  These last two guitars could change character thanks to the use of small personality cards that could be inserted in special compartments in the back of the body.  In this way, by simply replacing the card, it was possible to quickly pass from one "standard" circuit to another, that could be equipped with blender or humbucking splitter or treble bleed, etc. “Soldering is a thing of the past,” declared Richard McDonald, Executive Vice President.  “It's unpredictable, not particularly roadworthy. Fenders have always been easy to modify, to customize, but now, on a guitar like the Strat Plus, if you want to reconfigure the controls and functions, you can just pop-in one of our "personality cards".  It takes about 15 seconds.”
Personality cards and how use them
Finally, in 2015, it was the turn of the ​American Deluxe Stratocaster HSS Shawbucker, equipped with Tim Shaw's "zebra" pickup.​
The American Deluxe series retired in 2016, replaced by the new American Elite Series.
​
​Antonio Calvosa 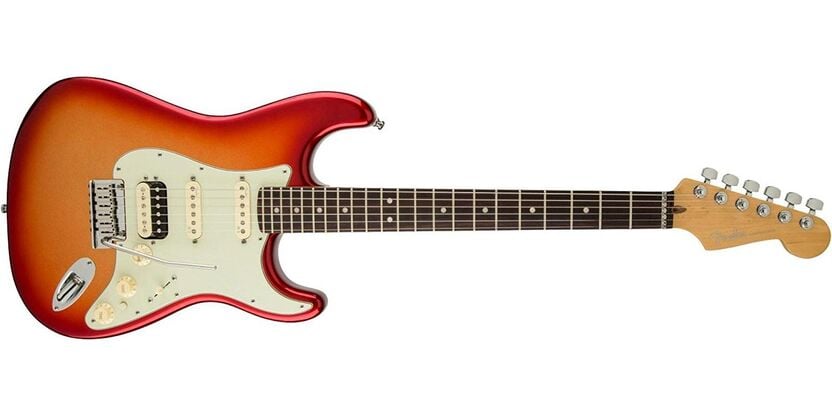