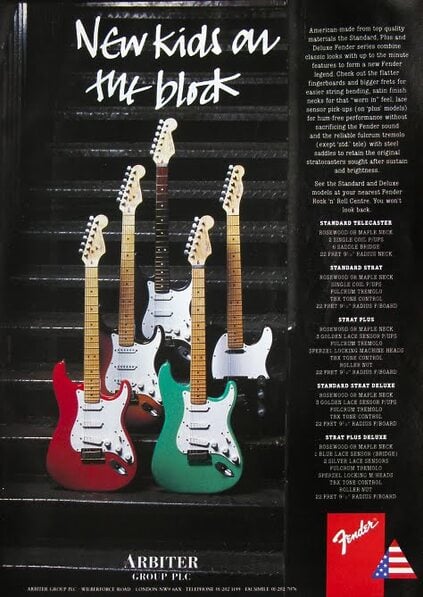 1989 Strat Plus (Courtesy of Reverb)
Another feature of the Strat Plus was TBX, already present on Elite and American Standards, on the second tone control. TBX, acronym of Treble Bass eXpander or Treble Bass Cuts (X), allowed a player to cut treble and bass by turning the tone knob, differently from the classic tone pot which cut only treble.  However, the increase in the mids derived from the attenuation of the other two frequencies let one suppose that it was an active system, but it was passive, as it cut and it did not amplify.
Strat Plus’s bridge was the same used on the American Standard, the 2-Pivot Synchronized Tremolo with inertia bar powder-coated, or, rarely, among the first examples, nickel-plated.
​Since late '80s, many of the Plus Series strats, but not all, came with a Hipshot Trem-Setter.  This new bridge adjustment mechanism, by acting on the screws, compensated for string tension allowing the return to the initial position after using the tremolo.  Even with a broken string, the bridge was self-regulated to leave the guitar tuned, if it had been set well.

It is interesting to note how this guitar was linked to Jeff Beck.  In that period Fender was in discussions with the guitarist about his signature model.  One of the prototypes, with stacked coil pickups, rejected by Jeff, then became the Strat Plus.  During the development of the Jeff Beck Signature Stratocaster, John Hill, British Fender representative that dealt with artist relations, knew of Jeff's passion for the 1932 Ford Chopped Deuce Coupe featured in the American Graffiti movie, and suggested they paint the guitar in the same yellow, a color that was subsequently named Graffiti Yellow for his guitar.  This color was used on the Strat Plus, but, paradoxically, not on the future Jeff Beck Stratocaster, which at the beginning was available only in the Midnight Purple, Surf Green and Vintage White colors.  Contrary to the belief of many, the first Graffiti Yellow Strat Plus are not Jeff Beck prototypes!

While the Strat Plus’ body was usually alder, (or poplar, between 1990 and 1994), Deluxe Plus’ was alder with the top and back done in ash, while the Natural finish was completely ash.  The finishes and the pickguards also could be different.  For example, between 1994 and 1997, a white or brown shell pickguard was applied on Deluxe Strat Plus, while Plus usually had a white pickguard.
At first, Deluxe Strat Plus bridge was, as on the Strat Plus, the two pivot American Standard Tremolo with threaded bar; however, in 1991 it was replaced by the Deluxe Strat Tremolo System, which differed from the previous one for the pop-in tremolo bar and that often had a black inertia bar, and, in 1994, by the Fender/Floyd Rose Locking Tremolo System, also known as Fender Deluxe Locking Tremolo System and sometimes nicknamed Mini Floyd, different from the classic Floyd Rose, despite having in common with it the same design featured for inserting and locking the strings.
The Deluxe Strat Plus first used the split version of the Wilkinson Roller Nut.  Even though the Strat Plus had already the Full nut, Deluxe featured it only in 1990 with the Schaller Locking Tuners.  Finally, towards the end of '93, both the Strat Plus and the Strat Plus Deluxe were switched to with the LSR Roller Nut.
​

​Unlike the other two Stratocasters in the Plus series, which had only the Fender logo engraved on the neck plate, the term "ULTRA" was also found in the Strat Ultra, (except for the very first Strat Ultra produced).  Fender equipped this guitar with an ebony fretboard with abalone markers and an alder body which had a top and a back in highly figured maple in order to make it more desirable.  It has been equipped with White Shell pickguard since 1994.

Between 1994 and 1995 Fender produced some Strat Plus' (but also some American Standards) with a body in aluminum which was probably left over from the production of the Custom Shop Harley Davidson 90th Anniversary Stratocaster.  It seems that about 120 models have been produced, 40 for each available color: Blue Metal Burst, Stars and Stripes and Violet Metal Burst.

As it happened with the American Standard, also in the Plus series it is possible to find the serial number E4xxxxx on the headstock of the guitars built in 1987 and in 1988, hence the doubt of having to do with a 1984 Stratocaster.  In reality, as often happened in the history of Fender, they are just decals left over from the old CBS management used for some years even after the change of ownership.
Also the serial number N9xxxxx can be confusing because it has been used both for the guitars born in 1989 and in 1990, and for those born in 1999 too.  So, how can we know that this is really a 1989-1990 Strat Plus?
​

THE END OF THE PLUS SERIES

The production of the Plus series ended in mid-1998, when Fender introduced the American Deluxe Series.  However, there are also some hybrid Stratocasters of the end of 1998 and even of the first months of 1999 which were initially sold as Plus because they had the locking tuners and the LSR Roller Nut.  They exhibited on the headstock a Spaghetti appliqué silver logo and were not equipped with the Lace Sensors, but with the Fender Noiseless or the Fender DH-1 humbucker, so they cannot be considered an actual Strat Plus, but rather the first American Deluxe models.