The ash problem and the American Professional II Series 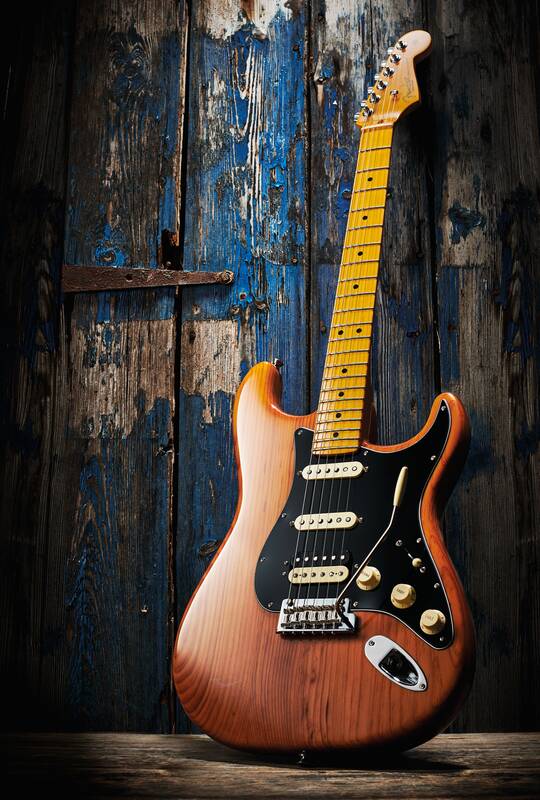 In April 2020 Justin Norvell, Executive Vice President of Fender Products, revealed in an exclusive interview with Amit Sharm, Guitar World, that Fender would no longer use ash bodies for production-line guitars, but only in selected and historically appropriate vintage models.
Norvell explained that the decision came in the wake of the ash tree destruction caused by the Emerald Ash Borer, an invasive beetle native to Asia that spread down from Canada and was highly destructive to the North American ash tree.  Unfortunately, the attempts at curbing the beetle’s impact were largely unsuccessful.  Although FMIC usually used the lighter, more porous swamp ash grown in the south of the USA, the spread of the beetle had been fast.  Moreover, the increased flooding of the Mississippi Delta, where Fender got most of its swamp ash wood, caused a near-total elimination of ash lumber from the market.  Swamp ash was harvested from trees that had been soaked in flood waters and taken when they recede.  But climate change affected the ability to reach it. 2019 saw record-setting floods, which caused the swamp ash harvesting grounds to remain underwater for most of the year.
As a result, Fender, as of March 27th stopped supplying dealers with certain ash models such as the American Professional Stratocaster, Telecaster and Jazz Bass.
This marked the beginning of a new chapter at Fender.  Alder continued to be Fender's principal tone wood.  Along with maple it was a fast growing and fast-replenishing wood. But the possibility of adding new woods like pine, sassafras or Western cedar was also on the horizon.  FMIC also started looking at little heavier ash and working on different chambering techniques that would allow it not to be 12 or 13 pounds, as Fender actually did with the new US Kenny Wayne Shepherd strat.
​

Rumors of a sequel to Fender’s American Professional Series, which first launched in late 2016, circulated as far back as August 2020, and, on October, Fender unveiled all-new flagship American Professional II Series.
Since its debut, American Professional Stratocaster became one of the most widely adopted instruments by players and working guitarists in the world.  This guitar evolved into American Professional II Stratocaster with adjustments inspired by feedback from influential artists across genres. Whether a live concert or virtual format, the new American Professional II Series continued to meet the needs of modern artists and remained the top choice to deliver an unforgettable performance on a stage at drive in concerts, in the studio or streaming a live session at home.
“Over the past few years we have refined and elevated the American Professional series as a result of ongoing conversations with our artist partners.  With their feedback and innovation, a priority, we reviewed every element across the series, incorporating new specs like a new sculpted neck heel, new pickups, 'Super-Natural' neck finish, and various aesthetic refinements including bold colorways, tonewoods like Roasted Pine and Tortoise shell guards on select models,” said Justin Norvell.  “We stand behind all artists by providing them with the tools they need, no matter where they are creating or performing, and remain committed to making every great instrument even better through thoughtful innovation.”
“Music has a special unifying power and guitar - and the artists wielding the instrument - play a big role in that.  As always, our creators and artists came first as we refined The American Professional II series to push the boundaries of guitar forward, deliver epic sound and offer reliability to artists across every genre of music, when the world - and our artists - need it most.”

"THE ONE. FOR ALL." CAMPAIGN

Through a spot narrated by actor and musician Billy Bob Thornton, the breadth and reach of Fender was shown through the eyes of the iconic models of the American Professional II Series.  Each guitar model was paired with artists whose voices showcase how inherently versatile Fender instruments were, a signature part of the strength and enduring popularity of the brand.  The new artists showcased within the film included Steve Lacy, Lindsay Ell, Dominic Fike, Joy Crookes and more.  The series continued Fender’s legacy to drive guitar, music and culture forward by connecting modern artists, players and fans everywhere through that shared loved of music.
“The American Professional II Series is the connective tissue that both artists and music fans are seeking now more than any other time in our nearly 75-year history,” said Evan Jones, Chief Marketing Officer of Fender.  “In addition to making the best tools possible for artists, it’s also very important for us to use the Fender platform to amplify and spotlight how their music is positively impacting the world.”
“The ‘The One. For All.’ campaign celebrates how guitar today is expanding both musically and culturally, which is why we’ve featured more artists in our creatove marketing than any other Fender campaign to date.  We are honored to have collaborated with diverse, talented artists to showcase how the American Professional is a versatile tool that supports their ability to create music that brings people together as music and creativity hasn’t stopped.”​

As the name suggests, the American Professional II line-up was an evolution of the series rather than a revolution, with new features designed with input from Fender’s artist roster.
While paying homage to the classic Fender sound, each instrument in the range received a few upgrades to fit the needs of modern players.  The American Ultra Series unveiled one year earlier seemed to have had at least some influence on this new American Pro's added switching options and improved higher fret access - and though the sculpted neck heel here wasn't quite as dramatic.
The introduction of pine on the Natural and Sienna Sunburst finishes was part of Fender's sustainable response to the declining supplies of ash in the USA.
New features included a 'Super-Natural' satin finish on the back of the neck and rolled fingerboard edges.  The “Deep C” neck shape, used also on the first American Professional Series, sat between the “U” and “Modern C” in terms of shape and feel, and was thinner towards the nut and thicker towards the heel.  It felt reliable and stable in musicians' hands without making them feel like they were playing a baseball bat with frets on it, and it was comfortable whether they were performing solos or strumming chords.
Since the American Professional V-Mod pickups had not achieved the expected success, Tim Shaw redesigned them.  The new V-Mod II single-coil pickups were more articulate while retaining the timeless bell-like Fender chime and warmth with the clarity and response that modern players need.  Push-push tone control added the neck pickup to any position like  the American Performer series.
Upgraded 2-point tremolo with pop-in tremolo arm and a cold-rolled steel block increased sustain, clarity and high-end sparkle.  And, of course, there were new finishes, as Miami Blue, Dark Knight, Mercury and Mystic Surf Green.
​