Tom’s idea was not to upset the guitar's design, but only to modify and improve it.  Obviously the key to Shaw was the pickups: “When they asked me to work on American Professional pickups, I thought about the magnets and specifically how they sounded whether in the bridge, middle or neck position.  That’s been done on a boutique level before, but this gave us an opportunity to voice them for position and purpose on instruments produced at a larger scale.”
He so began experimenting with different types of Alnico magnets, mixing them also on the same pickup to improve the sound of positions two and four: “The trick with the Strat is that positions two and four are just as important as positions one, three and five and we discovered that if we weren’t careful the "quack" of two and four went away.  So we then focused on reversing the magnets on the middle pickup, with Alnico II on the bass and Alnico V on the treble because it made the quack sounds better.”
The new American Professional Stratocaster was equipped with three V-Mod pickups, whose poles consisting in a mixture of Alnico II and III for the pickup at the neck, Alnico III and V at the mid and Alnico V at the bridge, controlled by the Treble Bleed, a passive circuit which prevented the damping of high frequencies during the roll off of the volume knob.
For the bridge position of the ​American Professional Stratocaster HH Shawbucker Tim Shaw proposed the Shawbucker 2, which was paired with the old Shawbucker 1 at the neck: “The Shawbucker 2 is not tremendously hotter, but it’s enough that those two balance well.  There's a lot of versatility, and it also has a treble bleed that is voiced for it”.
The American Professional Stratocaster HSS Shawbucker instead was equipped with a Shawbucker 1 and with two V-Mods. 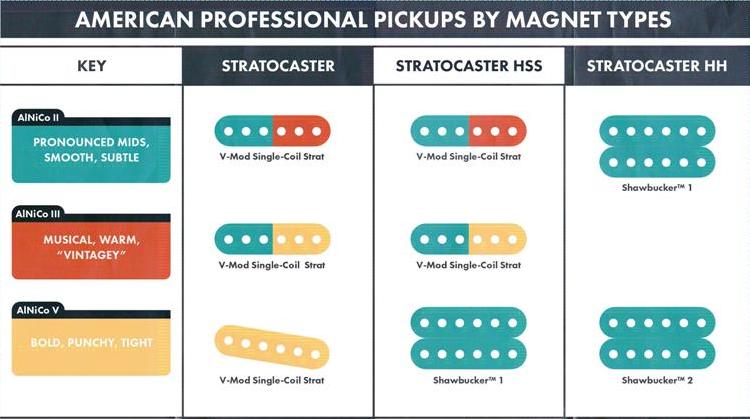 Particular attention was dedicated to the neck, with the new Deep "C" profile, thinner towards the nut and thicker towards the heel, where it reminded the “U” shape, to facilitate both the natural torsion of the wrist in correspondence of the first frets, where guitarists tend to wrap the neck with their whole hand, and also the position with the thumb on the back often used from mid-fretboards onwards.  The twenty-two narrow tall frets, particularly thin and tall, were designed to give the feeling of a lower friction of the fingers against the wood.  The 2-Point Synchronized Tremolo bridge, also, still with the vintage style bent steel saddles, was revisited using the pop-in bar.
​
Antonio Calvosa