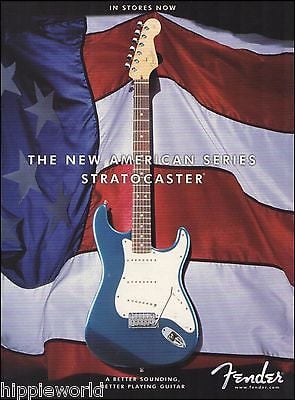 Looking at the advertisements, the new guitar didn't seem very different from the previous one, except for the headstock on which was applied also the “ORIGINAL Contour Body” decal and for the string tree which was one instead of the two on American Standard.  But to a closer examination it could be noted that the tuning machines were Fender/Schaller Deluxe Staggered Cast/Sealed: on the peghead, the first four tuning key posts were lower in height than the other two - they were staggered - which provided a sharper angle where the strings went over the nut, thus ensuring more tension and greater sustain.

New staggered tuning machines (2005 Fender catalog)
The neck was also slightly different: its modern “C” profile imitated that of American Deluxe Series, a little thicker in back, and rounded on the sides. Where the fretboard joined the neck surface, along the side, it was "rolled over", which was a process done by hand.  “The rolled edges are an ergonomic thing, a noticeable difference and a pleasant feel, especially if you play with your thumb over the neck.  It feels like an older neck”, said George Blanda.  There was more handwork on the frets and on the nut, too.
The alder body, (for some finishes ash was also used), lacked the swimming pool routing typical of the American Standard until 1998 and had a H/S/H routing.  Its contour also varied, becoming more “curvy”, as Mike Lewis defined it.  Most important, the veneered bodies were no longer fabricated and a thinner, polyester (undercoat) and polyurethane (clear and color coats) based finish was applied.
The pickguard was also changed to white parchment, although on the Butterscotch Blonde and Chrome Blue finishes a black one was used, (single-layer and three-layer, respectively).
The pickups, called American Strat pickups, were essentially the same as on American Standard, (the middle pickup was still reverse wound and reverse polarity), but had custom staggered poles to better adapt to 9.5" radius.  But, if in the original '50s Stratocasters the G pole was the highest point because in the past the G was the thinnest wound string, on the contrary in modern Stratocasters G was a plain string and the its pickup pole, to get the proper balance, needed to be lowered a bit.
It is interesting to note that on the 2004 catalog Tex Mex were indicated as pickups of the American Stratocaster, but actually it was only a printing error!
Regarding electronics, the American Stratocaster differed from the first series of the American Standard for the absence of the TBX, replaced by Delta Tone System, strangely not included in the left handed version, consisting of a “hotter” bridge pickup and a "no load tone control circuit" for the middle pickup and the bridge pickup.  While the TBX had a center detent at the 5 position, the "no load" worked like a regular 250k pot up to 10 position, where the system was activated and both tone pots were eliminated from the circuit.  According to Fender, this circuit allowed to get a wide-open treble sound.  Even the Swedish guitarist Yngwie Malmsteen, convinced that it also led to a slight increase in output, had the No load circuit mounted on the second series of his signature guitar.
However, it was possible to find transitional guitars between the two series, as often happens in the history of Fender.  In fact, Stratocasters that had both the features of the American Standard and those of the American Series were not rare.  For example, already in 1997 Delta Tone System replaced TBX on American Standard.

Around mid-2003, with the Hot Rodded American Standard series exit, humbucker versions (without Delta Tone System) of the American Series were included in the catalog: ​American Stratocaster HH, whose humbuckers were the Fender Black Cobra at the bridge and the Fender Sidewinder at the neck, and ​American Stratocaster HSS, equipped with a Fender Diamondback humbucker at the bridge and two Tex Mex single coils in the middle and neck positions.
At the same time, the S-1 switch was mounted on these guitars, an "invisible" push pull switch installed on the volume knob that did not alter the physiognomy of the guitar.  This switch could perform various functions, such as splitting the humbuckers into single coils or allowing new combinations of pickups, (they could all be activated simultaneously), either in series or in parallel.
Antonio Calvosa