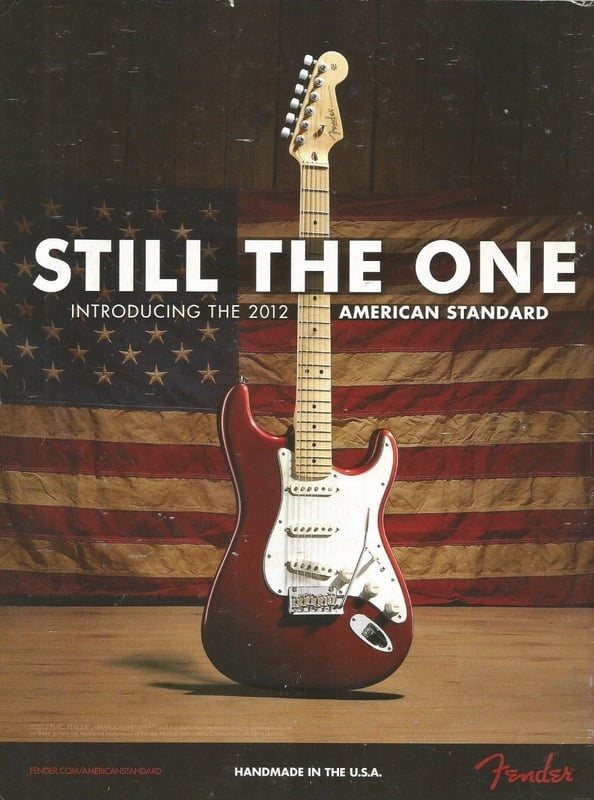 According to Ritchie, it was clear that the sound of the electric guitar did not depend only on pickups, which behaved like simple microphones of a sound determined by the "mechanics" of the instrument. ​  Everything was important: woods, strings, hardware, etc.  “The reason each instrument sounds different is that each instrument is different.  How the strings' energy is transmitted to the body, what is lost or affected along the way is also a big part”.
Small, but important, changes were applied to the new American Stratocasters, such as a better bridge with steel saddles, necks painted differently, thinner finishes, and a new hardshell case, the Fender/SKB.  The three-piece alder body, (ash with regard to the Sienna Sunburst finish), had, as in the American Series, a H/S/H routing body which eventually allowed replacement of the single coils at the bridge neck positions with humbuckers.  This guitar’s contour, obviously, was not as smooth and prominent as that of Leo Fender’s Stratocasters.  The undercoat was thinner for an “improved body resonance”, as a Fender advert recited.
One of the most obvious changes concerned maple fretboards, which now exhibited a “gloss” finish less anemic than that of the American Series and the first American Standard, while the back of the neck remained satin.  These changes did not please everyone: while on one side the neck appeared newer and more attractive, on the other it seemed even more delicate and did not allow the fretting hand to slide as easily as the previous ones. As in the American Series, the neck had a modern “C” profile and the fretboard edges were rolled to make the grip more comfortable.
A substantial innovation involved the bridge: while the two pivot system remained unchanged, new bent steel saddles, which harkened back to the pre-CBS ones, replaced the old block saddles.  The new ones, “for modern playability”, were narrower and the string spacing passed from 56mm to 52mm, while the neck width remained unchanged; consequently the external strings "entered" deeper into the neck than those of the previous series.  Fender declared that also the height of the saddles was decreased “to reduce rough feel”, while the “string slot on saddle was elongated to reduce string friction or breakage”. The old powdered steel cast with resin inertia block was replaced with a copper infused steel cast to obtain an “increased mass and improved tone”, as Fender said.  The mold used for its construction remained the same; therefore, in the face of an increase in the mass and an improvement in the sound given by the new tremolo block, there was no increase in costs for the FMIC.
For the rest, many things remained identical to those of the American Series: the electronics were the same, pickups were still American Strat single coil in Alnico V with staggered poles and the second tone knob was still associated with the Delta Tone circuit.  Tuning machines also didn’t change: low E and A keys were taller than the others four, for a better inclination to the nut.  The ​HSS model instead had a Diamondback humbucker and two Tex Mex single coils and did not have the S-1 switch; the HH model had a Black Cobra at the bridge and a Sidewinder at the neck.