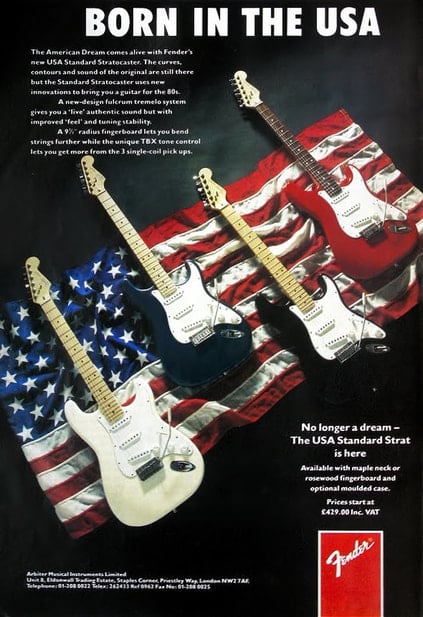 A small headstock (with whitish Fender logo), the BiFlex truss rod (designed by Charlie Gressett), the neck fixed to the body by four screws and the micro tilt were main features of the new American Standard Strat.  The radius was 9.5" and the fretboard had twenty-two medium jumbo frets - the addition of the 22nd one not changing the position of the pickups on the body.
But a new bridge was the most important innovation. Indeed, the Synchronized Tremolo, the flagship of Leo Fender’s guitar, had been redesigned during CBS management in order to lower costs and worsened due to the use of a poor die-cast metal; neither Elite Freeflyte Tremolo proved to be a bridge worthy of Stratocaster.  The new bridge designed for the American Standard wasn’t manufactured by inserting liquid metal into a mold as it was customary in CBS period, but pouring powdered metal – as Fender called it - in a press in which very high pressures were applied.  The tremolo block was angled and manufactured with low carbon steel (obtained through the powdered metal process).  The very first tremolo blocks were nickel-coated but, in a short time, they would be painted and, starting from the '90s, powder-coated.  However, in the initial project the junction point with the base plate had to be bare and uncoated; it is therefore not clear why the whole block, junction point included, began to be soon powder-coated. Saddles were filled and composed of a single block realized through the powdered metal process and had a small slot to slide the strings; they were therefore not manufactured either through Leo’s bending process or CBS die-cast metal.  The base plate was cold-rolled steel that was punched out of a flat sheet.  The new bridge was anchored to the Stratocaster by two large side pivots and no longer six screws, and this is why the American Standard Tremolo is often called also 2-Point Synchronized Tremolo.  The bridge thus built was simple and economic and, above all, produced a good sound, although it was obtained through an industrial process.
The first American Standard Stratocasters had the two pivot studs going straight into the body; between April 1987 and the early 1988 Fender changed the bridge and the new one had two pivot studs going into threaded inserts.
His pickups were flat-poles and didn't have a specific name, but later they would be simply called American Standard Pickups. The pickup in the middle was reverse wound/reverse polarity (RWRP), which makes it hum-canceling in the 2 and 4 "in between" positions. Each pickup no longer occupied a single space in the body of the guitar, but they were all inserted in a larger compartment called the swimming pool rout.  In 1998, however, the first body with HSH routing appeared and in 1999 it replaced definitively the swimming pool. The wood of the body remained alder; but in the early '90s poplar was utilized too due to some deforestation laws in Oregon, and in the second half of the '90s swamp ash was used for White Blonde and Natural finishes.
The body was almost always covered by three successive layers of polyurethane (undercoat, color coat, clear coat); however Dan Smith declared, for a short period, that a polyester undercoat was preferred to the polyurethane one in order to make the color adhere better, while a polyurethane clear coat and a layer of color, that could have been polyurethane or could be made of the classic lacquers, were preserved.  Unfortunately, it often happened that below the solid colors, but also in some sunbursts, (in which the whole back concavity was black), there was a body composed of a veneer top and back. George Blanda and Dan Smith justified by declaring that it was just an artifice to make solid colors adhere better and prevent mineral buildup from depositing along the grains.  In any case, the American Standard was the symbol of the new Stratocaster, finally equipped with a bridge that, although not comparable to that of Leo Fender, was at least worthy of his name.

It's interesting to consider what Scott Zimmerman, former luthier at Fender, said about the birth of the American Standard Stratocaster. At that time, the Fullerton factory was closed and Fender headquarters moved to the Brea building, which was not suitable for production.  The Corona factory had not yet been purchased, so Fender was unable to produce new guitars.  The problem was that a huge part of the guitars Fender got from CBS were all models that nobody wanted - only the Reissues were selling good - and Schultz and Smith were aware that they could not afford to waste time while looking for a new factory.  So Dan Smith and George Blanda designed the American Standard Series.  But Fender had no factory yet.
Smith thought that Fujigen Japanese factory could supply finished necks and bodies and Fender would supply all the remaining parts and labor, equal to 51%, making the label "MADE IN USA" legal.  “This project is totally legal, we have worked out the details with the US Customs Agency,” he declared.  Dan Smith and George Blanda supplied blueprints to Fujigen, which made painted necks and bodies, and Fender supplied all the other parts and assembled them.  The very first American Standard Stratocasters were born.  Fujigen continued to supply bodies and necks until Fender Corona factory could build and paint them.

Between 1994 and 1995 Fender also produced some American Standards and Strat Plus' with aluminum bodies, probably left over from the Custom Shop Harley Davidson 90th Anniversary Stratocaster production.
Made in limited edition, they were available in three finishes: Blue Metal Burst, Violet Metal Burst and Stars and Stripes, on whose aluminum body the US flag was drawn.
Unfortunately, Fender didn’t keep track of how many aluminum body strats had been produced; we only know that about 400 models, which should not be confused with the Anniversary Stratocasters, had been fabricated.

The earliest American Standard Stratocaster made in late 1986 and featured a serial number with “E3” (which is quite rare) or “E4” prefix. Furthermore, the “E4” was used until 1988. Many people believe that these guitars were built in 1983 or 1984, but actually they are only decals left over from the CBS management and applied on the new necks after the change of ownership.  Thus, “E5”, “E6” and “E7” were never used.
There is also some possible confusion with American Standard with the serial number N9xxxxx, because “N9” has been used by mistake both on the guitars born in 1989 and 1990, and in those born in 1999.  The latter are easily distinguishable from the others as they have the Spaghetti logo and the serial number is at the back of the headstock and not at the front as in the case of the guitars made in the '80s and in the early '90s (Fender shifted the position of the serial number in 1995).

It should be remembered that in 1989 Fender presented also the​ ​American Standard Deluxe Stratocaster which joined the Plus Series and the American Standard and remained in production for only one year.  Equipped with three Lace Sensors Gold, this guitar is confused by many with the Strat Plus, but it can be distinguished because it lacks the Roller Nut and the Locking Tuners.