Stratocaster at the dawn of the 80s 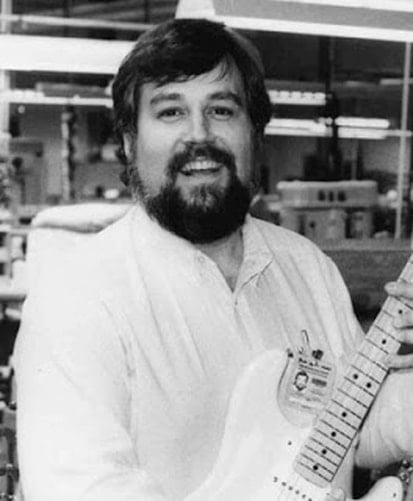 The fifteen years of CBS management led inevitably to the destruction of what Leo had gone to great efforts to build.  Weakened by such a bad reputation and by the interest of the guitarists in vintage Stratocaster, CBS was now looking for new people to revive the company.  In 1981, CBS hired John McLaren to head up CBS Musical Instruments, the whole division, which included also Steinway, Gemeinhardt, Lyon & Healy harps, Gulbransen.  He was from Manchester, England, and came over from Yamaha.  In the same year, John McLaren replaced Ed Llewellyn with Bill Schultz, also from Yamaha, as new president of Fender/Rodgers/Rhodes.
Bill was a brilliant businessman.  He was commissioned to redesign the company, improve the quality of the products and its reputation, invigorate production and the distribution network through the difficulties of the new global economy.
It was obvious that Stratocaster had to be purged of the CBS influence.  To this aim new colors, new sound combinations or brass components were not sufficient; much more was needed.  The image of the Fender guitar had to be questioned and redesigned from the ground up.  According to Bill Schultz, the right man for this purpose was a designer that he had worked with at Yamaha and whom he hired in 1981: Dan Smith.
Dan was charismatic, knew how to talk with people and, sometimes, how to inspire them.  He had a great passion for Fender and was loved by his employees.  He had been certainly the most important person for the company since Leo.  Without Dan Fender would not probably exist today.  “And at that point in time everybody hated what Fender had become. For about 10 years, the quality of the product had been awful.  Not that there weren’t good guitars made during that time, but generally it had really gone down,” Dan Smith said.  “The company had no soul at the top. When I first came there, I sat down and talked to guys like John Page and Troy Lane and some of the guys working on the line, and the players who worked for the company were real unhappy.  They’d come to work for Fender because it had been a dream of theirs as kids to work for a guitar company, and they came in and they cared about the quality of the product. But the management at that time could really give a shit.”  And, with respect to the Fullerton factory, he said: “Everything was antiquated.  We had come from Yamaha - and at that point Yamaha probably had the most modern guitar factory in the world, for both acoustics and electrics - into a factory where guys were hand-cutting on a bandsaw with no guards, cutting out the contours.  They’d have a thing they’d lay on top of it as a guide, they’d put a pencil mark on the back and a pencil mark on the front, they’d lay it into a tray, and the bandsaw blade was exposed so much.  If that blade had snapped or something like that, the guy’d be dead.”
Under his guidance, not only was the Stratocaster was completely renewed, but the list was enriched with new guitars, including the reissues of the 1957 and 1962 models, now called Vintage Stratocaster, and Fender for the first time started to produce guitars outside the United States, inaugurating the Made in Japan era.