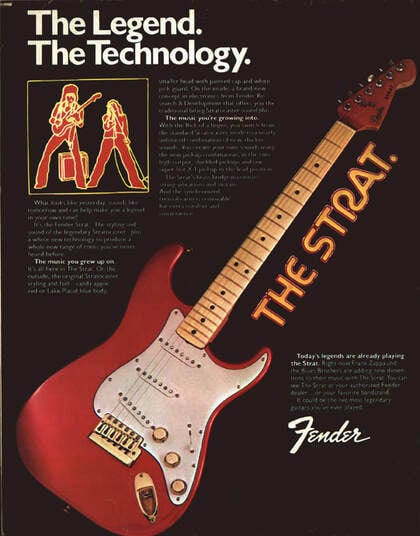 There is widespread conviction that Fender could not reproduce the original ‘50s shape because no one could make the correct blueprint, but there were many people at that time who can draw the exact shape of the original headstock, included Freddie Tavares who designed it!  So, the new unique shape of the Strat headstock was a deliberate choice.
​The new guitar’s hardware and the knobs were in gold plated brass as the trend of the moment dictated.  Only the tuning machines, the Deluxe Schaller Keys, at first, weren’t gold plated.   Legend says that this delay was due to problems of availability; however, the numerous changes made to the Strat during 1982, as a new small matching headstock, no longer looking “atrophied” and dubbed the Smith headstock, a new neck plate, a different contour, a new logo and new finishes, seem to indicate that the delay was due to a deliberate choice.
At first there were only two finishes offered.  Candy Apple Red and Pacific Blue, but Arctic White had been available since 1981 and many others came later.  It was not a great guitar really, but it was the first time that Fender added a new Stratocaster line to the standard production.

In 1980 the ​​Hendrix Stratocaster was also introduced.  It had nothing to do with the other models Fender produced later that were dedicated to the legendary guitarist.  Available only in the Olympic White finish, it was basically similar to the Anniversary, but it had a reverse headstock and an additional contour in the front of the body.
The Hendrix Stratocaster was strongly desired by the sales manager Mudge Miller and it was realized in the R&D (Research and Development) department.  John Page took care of almost all the work; he remembers that at first Miller wanted an additional decal, never applied, to the headstock: a circled “M” that had to stand for “modified”, (or for “Miller”, as some of the more malicious suspected).
It seems that only twenty-five instruments were manufactured, probably all or almost all prototypes, of which only five have been certified.  One was owned by Stevie Ray Vaughan, who sometimes used it in his shows; another, owned by John Mayer, has been analyzed by the Custom Shop for the purpose of producing one hundred replicas in 2005.

The 1975 Rhinestone Stratocaster might be considered, long before the birth of the Custom Shop, the first Fender “art” guitar.  In that period the British distributor of the California company was CBS/Arbiter, a joint venture between CBS and Ivon Arbiter.  Towards the end of 1973 Arbiter opened a big musical instrument store in London, the Fender Soundhouse.  When the sculptor Jon Douglas went to the store and said that the exposed guitars were boring, he was challenged by Arbiter to do better; so the sculptor created a fiberglass body covered with a layer of cold-worked bronze.  A prototype was thus made, followed by six models of the Rhinestone Stratocaster each with reliefs carved in different ways. On Arbiter’s advice, Douglas inserted some rhinestones on the body of these instruments – and this explains the origin of the name.
In 1975 the Rhinestone Stratocasters were put up for sale at Soundhouse; unfortunately a fire hit the store and almost all the guitars were destroyed (it seems that only two guitars had been sold before the fire).  At the beginning of the '90s, Jon Douglas made twenty-five unauthorized replicas of Rhinestone Stratocaster, using original parts from the '70s too, all of which identifiable thanks to a numbered plaque in the back of the body.
Antonio Calvosa 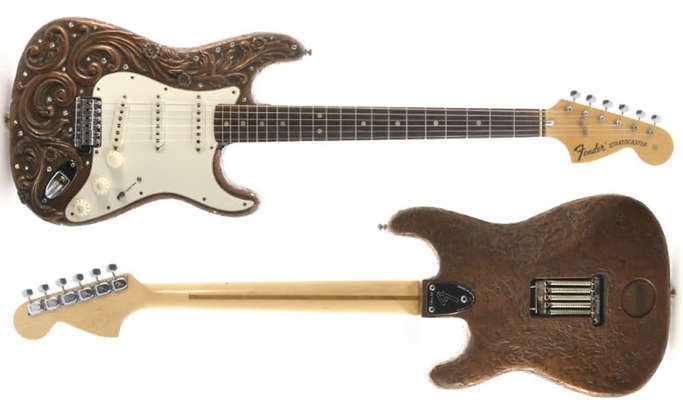