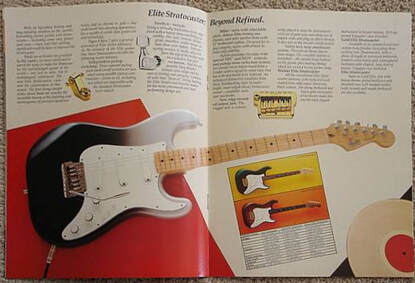 Born under the supervision of Dan Smith, John Page, and Freddie Tavares, it had a lot in common with the regular “two-knob” Standard Stratocaster: big frets, a flat fretboard radius, the unfamous Freeflyte Tremolo by Chip Todd, although more massive than those used on the regular Stratocaster, and the new BiFlex Truss Rod, conceived by Charlie Gressett, whose adjustment at the headstock allowed adjusting its curvature to make it concave or convex.  After it was in production for a while, John Page slightly modified it by adding the lip to the anchor because the tilt screw adjustment could push the anchor up through the fretboard if too much pressure was exerted on the screw. Adding the lip prevented that from happening.
EMG was initially supposed to develop new circuits for Fender, but those could not be finalized. So the electronics were designed by a team of people consisting of Roger Cox, Paul Guegan and Bob Eggler.
However, it was able to get a variety of sounds never heard before, as the slogans with which it was presented recited: “From the classic Fender sound to a fat humbucking sound”, “Best of both worlds” and “Your favorite Fender - and non-Fender - sounds”.  This was possible thanks to an active preamp circuit associated with the MDX boost which, acting on medium frequencies, allowed it to get sounds that ranged from the classic Fender sound to the one which “should have” imitated the humbucker, and to the new TBX tone control system shortly after applied also on the American Standard, Strat Plus and Clapton Stratocaster.  TBX allowed a player to cut treble and bass by turning the tone knob, differently from the classic tone pot which cut only treble.  However, the increase in the mids derived from the attenuation of the other two frequencies let one suppose that it was an active system, but instead it was passive, as it cut and it did not amplify. Hence the different interpretations of the acronym: Treble Bass eXpander and Treble Bass Cuts (X).
Three buttons controlled the numerous combinations of its three pickups, whose Alnico II poles were hidden by the covers.  In order to reduce the buzz, the Elite Stratocaster was equipped with a hum cancelling system, whose core there was a dummy coil, halfway between the bridge pickup and the central one.
The Ezy Glider string tree and the side-mounted jack socket appeared for the first time on this guitar.

GOLD ELITE, WALNUT ELITE AND THE MADE IN JAPAN

It was available in the two variants. The Gold Elite Stratocaster, which, differently from the basic model, had a gold plated hardware and pearloid tuning machine buttons, and the ​Walnut Elite Stratocaster, that, besides having a golden hardware, had both the neck and the body in walnut and the fretboard in ebony.
It should be noted that, at the end of 1983, Fender Japan also produced a small number of Elite Stratocasters, the EST83-110s, equipped with twenty-two frets, for the Japanese domestic market.
​Antonio Calvosa
​