Smith Strat (Courtesy of Mario Cicciocelli)
Dan Smith was the man chosen by Bill Shultz at the beginning of the '80s to reinvent Stratocaster.  In August 1981, in agreement with CBS, the Fullerton industrial plant was converted in order to produce much less than the daily 250-300 guitars realized in the '70s, thus improving quality control.
Finally, at the end of 1981, Dan Smith redesigned the Stratocaster, definitively abandoning the 3-bolt neck plate and the tilt neck which was replaced by the classic neck plate with four screws and with the truss rod regulation to the neck heel.  There was a return to the small headstock, although not the same as the pre-CBS one, called Smith headstock, on which the word "STRATOCASTER" was printed in large letters.  “With John Page’s help, one of the first things that I knew, coming from the outside as a player - and half the guys on the inside knew this, too - was nobody wanted to buy a three-bolt neck with a great big headstock and a bullet truss-rod.  So one of the first things we did was to change the product back over to four-bolts.  We had an incredible amount of inventory of bodies and parts that we had to work through, but we changed it back to the four-bolt neck and the right headstock”, Dan Smith said.
The tuning machines had the letter “F” printed on the back, and while the pickups were still flush poles; the X-1 pickup, already present on the Strat, stood out in the bridge position.  The body, more contoured than those of the end of the '70s, was covered by a clear coat of polyurethane.  It was usually made of alder, but, with some transparent finishes, hackberry was preferred for its grains.
The bridge was still die-cast, as in CBS era, but clearly it was a temporary situation that would soon change.
Since Stratocaster was no longer a Fender guitar model, but represented a whole line of Fender guitars with different names, including Strat, Gold Stratocaster and Walnut Strat, this basic model was named Standard Stratocaster.  Its first version, unofficially dubbed ​Smith Strat, was marketed in December 1982 and it must not be confused with its second version, marketed in June 1983. You won’t see "Smith Strat" on the headstock, or on any catalogs, because it's only a nickname that Fender enthusiasts gave to this model the “Smith Strat” in homage to the man that redesigned Stratocaster. 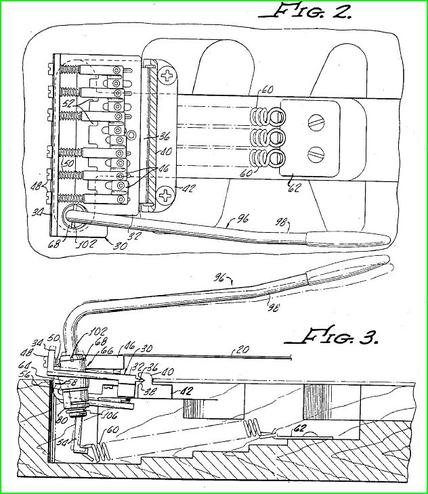 Freeflyte Tremolo Patent
In June 1983, with the aim of lowering costs, the Standard Stratocaster was significantly revised by relocating the jack socket to the new single layer, twelve screw pickguard, and offering only one tone control instead of two - hence the nickname "2 Knobs Stratocaster". The new Standard Stratocaster was born.
“The concept was mine and a part of it was all about cost,” Dan Smith said.  “When I got here in 1981, regular Strats were almost a thousand bucks without a case.  We had to compete with the stuff coming in from off-shore, so we were looking at ways to cut costs.  One was to relocate the jack to the pickguard.  That let us to remove a ferrule [the standard output jack], which was a chrome-plated part and cost us three or four bucks or whatever it was. [...] The new wiring harness could be done in one piece and just dropped in, so that cut production time.  We also reduced the knobs to one volume and one tone.  So you pull out three dollars of your cost here, and another five bucks there, and another couple of bucks somewhere else.”
It was really a controversial instrument.  This Strat featured a four (not three) bolt neck plate with micro tilt and was equipped, for the first time with regard to a Standard Stratocaster, with the new BiFlex Truss Rod, designed by Charlie Gressett and already present on the Elite model, whose adjustment at the headstock allowed adjusting its curvature to make it concave or convex; this system was so successful it was used, years later, for the American Standard and for other Stratocasters made in US.  Bigger frets and an almost flat fretboard with a less rounded neck were adopted to attract guitarists.
But Bill Carson declared it the worst Stratocaster ever and, according to many, the guitar had obvious tuning problems due largely to the new Freeflyte Tremolo with new die-cast stretched saddles, devised by Chip Todd, a former engineer from Peavey and hired by Fender, still made from a mold and, at first glance, worse than the classic Synchronized Tremolo.  According to others, the bridge worked well as long as it was properly tuned.  In this "inertia bar-free" device, the springs’ tension was regulated by the front face of the body, and consequently, had neither back cavities nor back plate.  It had a single knife edge pivot that went all the way across, so there were no base plate screws.  Instead, there was a V-groove block that received the knife edge.  “We felt [the full width pivot] was the best way to get the tremolo to move back to mechanical center, but it had problems,” Dan Smith said. “The balance was actually too good, so you'd get a lot of warble because it was always moving - the V groove was so sharp the tailpiece moved around too much.  And we needed a place for the spring tension adjustment, which was something we added to the bridge shortly before we introduced it.  We were messing with the geometry, changing the relationship between the pivot point of the string, and we didn't get a chance to test it enough.  We ended up giving a lot more power to the string, so when you tuned it up the bridge would pull up off the body further than a normal Stratocaster, and when you bent strings the bridge would move around more.  It was impossible to keep in tune.  We didn't realize all that until after we tooled up.  The bridge was a cast piece from Schaller.  We tried to make it better than its predecessor, but at the end of the day the tremolo was a nightmare.”
It's interesting to note that in 1983 Fender Japan made his own version of the Two-Knobs Stratocaster, the ST83-80.  Dan Smith visited Fujigen factory a few times.  Once he brought with him a 2 Knobs Standard Stratocaster and the Japanese luthiers copied it.  The main difference between the Japanese and the US model is that the former had 22 frets and the latter 21.
Antonio Calvosa​