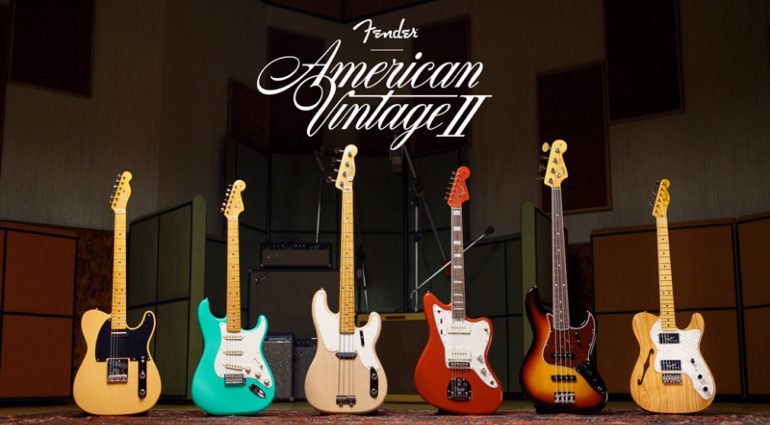 The fascination with vintage eras was as prominent in 2020s culture as it had ever been. Classic songs re-entered the charts decades later because of Spotify, YouTube and TikTok, and people were drawn to the vintage look and are constantly looking to satisfy the feeling of nostalgia. This demand even extended to vintage instruments: if there was one thing guitarists love more than new guitars, it was old guitars. With genuine antique sought-after Fender instruments so rare and insanely expensive, the Custom Shop had been getting more and more requests to build brand new guitars as close to the vintage specifications and aesthetics as possible, but even Custom Shop guitars were priced out of reach for most players. So, Fender always felt the need for vintage-inspired high-quality US production guitars, cheaper than those manufactured in the Custom Shop, and the Fender American Vintage II Series followed the previous successful Fender US-made instruments lines celebrating iconic models through the decades, a path taken in 1982 with the first Vintage Series. With period-accurate specs and aesthetics, these instruments and basses were designed for players who love vintage instruments but were produced with modern technologies that ensure uniform build and feel.
​
Justin Norvell, Executive Vice President of Product, FMIC, said that two years before when they were conceptualizing the AVII to replace the American Original Series, they wanted to change the vintage line and expand it into some new things that they hadn’t done before and pick some different years that they thought were cool. To decide on which years to produce, Fender drew from what Norvell calls a “huge cauldron of information” from Custom Shop Master Builders to collectors with vintage models to former employees from the ‘50s and ‘60s, and they opted for 1957, 1961, and 1973.

However, this revamp of vintage-style American Fender instruments was announced as the latest lineup of ‘more accurate’ re-releases from the brand’s history, but the Fender American Vintage II Stratocasters, at least apparently, were not too distant from the previous American Original Stratocasters. At first sight, the most notable difference was that every guitar in the new series sported the vintage-correct 7.25” radius fretboard, whilst American Original Strats featured a modern 9.5” radius fretboard. The American Vintage II 1957 Stratocaster and the American Vintage II 1961 Stratocaster featured a 1957 “V” and a 1961 “C” shaped maple neck respectively, and new more delicate nitrocellulose lacquer finishes, which take longer to cure and dry, that aimed to mimic a vintage guitar’s paint job, were used for these guitars. Also, the new ’61 Stratocaster featured a slab rosewood fretboard and the Spaghetti logo, which replaced the round-lam rosewood fretboard and the Transition logo of the American Original ‘60s Stratocaster. Even more minute details, like the width of 12th fret dots and the material used for them, were labored over. Other premium appointments included a vintage-accurate synchronized tremolo with cold rolled steel block and bent steel saddles, and single-line “Fender Deluxe” tuners.
“The iconic models in the American Vintage II Series are a near 1:1 comparison with their original predecessors. Today they are built with precise, modern manufacturing processes that weren’t available in the past,” said Justin Norvell. “These original guitars and basses have long been coveted by avid players and vintage enthusiasts around the world for their aesthetic and tone that inspired some of the greatest music and most-identifiable guitar and bass lines of all time. Whether you’re after nostalgic guitar sounds in the studio, or a vintage-style instrument that can withstand the demands of the road, the American Vintage II Series harnesses the best of Fender’s legacy and craftsmanship so modern musicians can innovate today’s soundscapes.”
​

In fact, according to Fender, American Vintage II Series was not just about replicating these iconic models, it was about recreating the inspiration they generate and sharing that inspiration with a new generation of musicians.
In addition, Fender teamed up with Brothers Osborne, James Bay, and Jeff Beck, for special videos that highlighted the influence the vintage instruments have had on their musical journey.
“If you’ve listened to popular music, chances are your favorite songs, guitar solos, and punchy bass lines were played on a Fender [guitar],” said Evan Jones, FMIC CMO. “It’s impossible to count the number of artists who have used these instruments to create some of the most memorable music that has spanned the last 76 years. Built to the original specs, these American Vintage II series models demonstrate both the timelessness and relevance of the Fender brand.”
To further amplify the American Vintage II Series launch, Fender hosted an immersive 1950’s themed pop-up event at Volcom Garden in Austin, Texas, on 14th October 2022, to coincide with the Austin City Limits Festival, and guests enjoyed a direct-to-vinyl recording booth, jam sessions, plentiful photo ops and most importantly, the opportunity to purchase an American Vintage II ‘51 Telecaster at its original 1951 price, $229.90 (a fraction of today’s cost!). Fender hosted a second experiential pop-up at the Ba-Tsu Gallery, an event space near Tokyo’s Omotesando Station, on 14th and 15th October 2022, where players could purchase an American Vintage II ‘57 Stratocaster at the original $274.50 ‘57 price.
​Antonio Calvosa