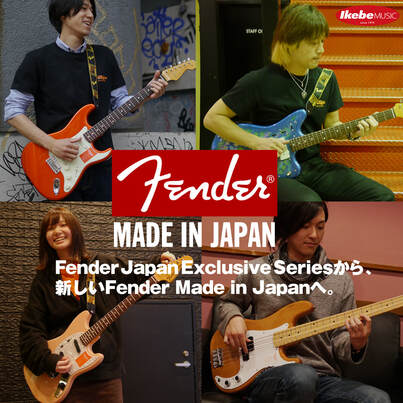 In 2015 Fender took direct control of the distribution of the instruments manufactured in Japan and, at the same time, the Japan Exclusive Series was presented. This Series was still produced by Dyna Gakki, who had been in charge of making guitars for Fender Japan for years, so it didn't change much from the previous production.  In addition to the Exclusive Series, since 2015 the other Fender Series made in the USA or in Mexico would be available on the Japanese market.  Since now the new Fender Musical Instruments (Japan) would have produced also a few Fender Special Run (FSR) instruments for the Western/US market.
In 2017 the master builder Chris Fleming was invited in Japan to monitor the production of the new Made in Japan Traditional Series born on September 13, 2017 to commemorate the thirty-five years of Fender Japan.  According to Chris, they made a variety of small changes and improvements to how the guitars were made, most notably how the truss rods were installed, how the fretboards were glued on, fret mounting, and final setup.  At the same time new models featured old-fashioned waterslide decals applied over the headstock finish for the logos, and the serial number was moved from the base of the neck to the back of the headstock.

Simultaneously with the presentation of the Traditional Series, in late 2017 Fender also unveiled the Made in Japan Hybrid Series.  The Hybrid Stratocasters were player-friendly instruments that combined the looks of a classic Fender model with modern specs.
In mid 2019 Fender announced the Made in Japan Modern Series.  In the past Fender Japan was responsible for some of the most forward thinking releases from the brand, and the Modern Series was the perfect proof.  “Heavy sound beyond imagination.  The arrival of the Made in Japan Hybrid Series, which will excite the players of today.  Updates in playability and sound to meet the needs of today's technical players.  Streamlined bodies which personify a sense of speed loaded with high playability compound radius necks and locking tuners which deliver stable tuning even with extreme playing,” Fender stated.
For a better playability, 4-bolt asymmetrical neck plates were adopted for this series.  The pickups used were fourth generation Fender Noiseless pickups, for nailing Strat tones without unwanted noise in the background, while the HSS and HH models also featured Modern Modified Humbucking Pickup, providing tone and performance suited to creating heavy sounds.​ 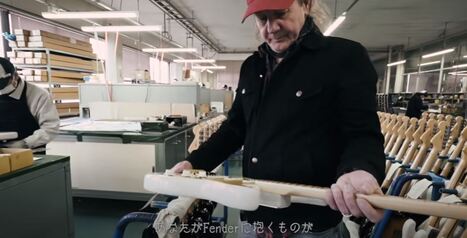 Mark Kendrick at Dyna Gakki factory with a made in Japan Heritage Strat
On March 17, 2020, Fender Music Japan, part of Fender Musical Instruments Corporation (FMIC) announced the launch of the Made in Japan Heritage Series, developed with the guidance of Master Builder Mark Kendrick.  “Incorporating Fender’s spirit to pursue innovation and technologies while treasuring the very essence of its DNA, the Made in Japan Heritage Series features vintage tones, traditional designs and authentic specs of true Fender Instruments coupled with quality Japanese craftsmanship.  This series establishes the true value of the Made in Japan Fender products, through extensive re-evaluation of its significant history and evolution of the Japan-made products,” Fender stated.
This series delivered the true essence of Fender instruments with refined body and neck shapes, ideal pickup settings and colors - all referenced from the original US drawing archives and various vintage instruments.  All Heritage Stratocasters had nitrocellulose lacquer finishes so they'll age beautifully too.  “The Made in Japan Heritage Series captures the spirit and very essence of Fender’s DNA.  These guitars are authentic Fender craftmanship.  You will notice the classic nuances in the lines, curves and contours almost immediately.  The player will enjoy the sound of historic tones while appreciating the high quality of the Japanese craftsmanship,” said Kendrick.  “I was blown away the first time I held a guitar from the Japan Heritage Series! These guitars exceeded my expectations.”
Antonio Calvosa