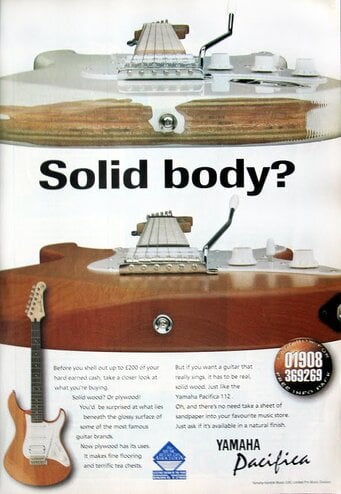 Towards the end of the 1980s, the market was invaded by a large quantity of Korean guitars, even cheaper than those made in Japan, such as the Merlin Sidewinder.  Fender, in order to compete with these copies, decided in 1987 to start producing new cheap guitars in Korea, at the beginning, for a very short period under the Fender brand, and immediately after under the Squier brand, which until now had only been used in Japan.  The new guitars made in Korea were first built in the Samick, Young Chang and Sung-Eum factories.
The Squier Standard Stratocaster, with the plywood body, had a very competitive price, unlike previous Fenders.  Consequently, for market logic, the Squier brand had become exclusively Korean since 1988.  Japan kept on producing Stratocasters, but in 1988 the MIJs were “upgraded” to Fender.  At first Korean Standard Stratocasters were fabricated in Black, Red and White finishes, followed by those Black, Midnight Wine, Arctic White and Electric Blue.
Besides these, between 1988 and 1990 the Squier Contemporary Stratocaster were made in the HSS configuration, without a pickguard and with side jack socket, rosewood fretboard, Schaller Floyd Rose Licensed bridge with locking nut.  The available finishes were Black, Razz Berry, Frost White, Flash Pink.
Both were replaced in 1992 by the second series of the Korean Squiers, available exclusively with the maple fretboard.
It is interesting to note that the serial number of the '80s guitars from the Samick factory was "Sxxxxxx", the first number usually indicating the year of production.  Young Chang and Sung-Eum factories instead adopted the serial number "Exxxxxx".   However, in the '80s, the first number didn’t express the solar year but the Korean production period.  In 1987 and 1988 they used as first number "1", in 1989 "2", while only since 1990 they began to follow the classic numeration based on the year of production, and so, after the 1990 "E0" serial number, they repeated "E1" (1991) and "E2" (1992).  However, it was possible to distinguish them because the serial numbers "E1" and "E2" of the '80s were stamped on the headstock with a very light silver decal, while those of the '90s used a black decal.  In addition, it must be considered that sometimes the serial number of the Korean guitars consisted only of numbers, without letters, and that some rare Stratocasters from Young Chang in the first years of production exhibited the serial number E7 or E9 (and their body probably was not plywood but "solid" wood)!  Actually a great confusion!
According to a legend, the components of the first MIK Squiers came from the FujiGen Gakki Japanese factory.  In reality, Fender guitars continued to be fabricated in Japan, so there was no surplus stock to send in Korea.  And, indeed, the differences between the MIK Squiers and the MIJ ones were considerable: the electronics, the hardware and the pickups of the Korean guitars were of inferior quality (Japanese ceramic pickups were better and had a trapezoidal shape, the potentiometers of the first Korean Squier were smaller), but above all the bodies were in plywood, built through the overlapping of several layers of wood.  This "trick" was cleverly hidden by veneering the body and using thick polyester paints, all of which cut costs considerably.  However, the tuning machines of the first "E" series MIK Stratocasters were the Fender/Gotoh "G", like those used in Japan, while those of the series “S” were unbranded or the more economic Jin Ho hexagonal covered.  Also the black roller string trees, used in the Young Chang and Sung-Eum factories, and the bridge, whose saddles showed the double-sided "Fender" unidirectional engraving, seemed to be the same ones employed in the early periods of the Japanese reissues.  Someone suggested that the Korean saddles came from America, but, apart from the contradiction implicit in this statement given that the FMIC wanted to lower the costs of MIKs, "Fender" engravings on the American saddles had reverse directions.  According to John Page, however, the saddles used on the Korean Squiers were produced in the Taiwan Ping factory.
After a bubbly start, with good sales, due to the low quality of the Squiers MIK and to the strong competition from the Korean copies, like the even lower priced Vester, sales collapsed, and towards the end of 1991 Fender decided to once again make Squiers also in Japan, like the  ​Hank Marvin or the Squier Silver Series.​
​

With the third series, the ​Squier Standard Stratocaster's fretboard returned to rosewood, at least until 1996, when maple also reappeared in the catalog and the Sunburst finish became available.  The serial number was moved to the neck plate and the decals on the headstock were redesigned while maintaining the black Squier logo.

THE END OF PLYWOOD

They were available in the SSS and HSS models, under the name of ​Squier Standard Fat Stratocaster.
In spite of everything, they were not well built (it wasn’t sufficient to change the body to make them better) and were surpassed in sales by the excellent Squier Pro Tone, which only cost a little more, and to which the entire next chapter is dedicated,
It should be remembered that already in 1996 some Squiers started to be made first in China and then in Indonesia, and that only in 1998 the production of the Standard Squiers was temporarily moved to Mexico, where the "Black Label" Squier Classic Stratocaster and the Mexican Fender Squier Series, which we discussed in the chapter “The hybrid Stratocasters of the 90s”, had been made some years before.

SQUIER II: MADE IN KOREA AND MADE IN INDIA

With the intent to offer instruments with an even more affordable price, between mid-1988 and 1992 the Stratocasters Squier II were also made, built both in Korea and in India, in the Madras (now Chennai) Greeta factory.
Their body, available in Black, Torino Red and Frost White finishes, was probably always in plywood even though the Fender catalog spoke of "hardwood", and it was thin and usually heavier than the other Korean guitars, and the hardware was definitely cheap.
It was possible to find the Squier II Standard Stratocasters both in the ​SSS (of Korean and Indian origin) and HSS (only made in India) versions.  The Indian models immediately stood out for their headstock, the shape of which was very different from the Leo Fender original ones, and for a three-layer pickguard that had little in common with the classic Stratocaster pickguard.
The ​Squier II Contemporary Stratocaster, equipped with one humbucker and two single coils, were instead of solely Korean production and they differed from the HSS Standards by the absence of the pickguard and for the side mounted jack socket.
The Indian instruments did not always have the “made in India” decal on the headstock, while their serial number, which followed an American-style numbering ("E" for the '80s and "N" for the '90s), was printed on a sticker attached to the neck heel that often peeled off.
The serial number of the Korean Squier II Stratocasters was put on the headstock and began with "E" or "S", depending on the production plant, though some instruments with the "M1" or "J1" serial number had been produced in 1991.

In 1992 some Squiers, both Standard Standard (SSS) and Contemporary (HSS) Stratocasters, with the silver edge logo and an "M2xxxxxx" serial number, were fabricated.  We know little about these guitars even though their build quality seems to be better than the other Korean Squiers of the same period.  They had been probably made only for a very short period between the first and second series of the Korean Standard and Contemporary Stratocasters, just before the "decline" corresponding to the Black Logo.

They were available, as well as in the classic "Korean" Black, Torino Red and Arctic White finishes, also in Pacific Blue.
But a vintage style bridge, a 3-ply pickguard, the Fender logo in plain sight, and the “Squier SERIES” decal were not enough to revive the Korean Squiers.

The Fender Bullet was a guitar conceived for a young and novice public with the purpose of replacing the Duo Sonic and the Music Master.  Designed by John Page, its components came from Asia and were assembled in the United States; however, Fender soon understood that the materials’ transport was not economically convenient and decided to move production to the US, using production waste.
These guitars’ headstocks stood out for the presence of a star near the Fender logo and for the inscription “Bullet” or “Bullet Deluxe”.
In 1982 the Bullet was redesigned with a body that resembled the double cutaway Stratocaster one, while maintaining a neck similar to that of the Telecaster.  The models were brought to five: Standard, Deluxe, S-3 (with three single coils), H-1and H-2 (respectively with one or two humbuckers and coil tap switches).
In 1983 Fender decided to give the Bullets to the Squier brand and to make them in Japan, The pickups used were ceramic and the available finishes were Black and Sunburst (while the American ones could be found in the White, Cream and Red finishes).  Some had a serial number that began with “SQ”, others with “E”.  The available models were the Squier Bullet H-2, Squier Bullet S-3, Squier Bullet S-3T (two versions) and Squier Contemporary Bullet HST (first version).
Finally, in 1987, the production was moved to Korea, with the Squier Bullet S-3T (third version, also in the red finish), 1987 Squier Contemporary Bullet HST (second version) and Squier Contemporary Bullet HST models.
It is important to remember that so far the Bullet was not a type of Stratocaster, although the 1987 Korean S-3T models resembled it a lot.
The "E9" serial number of the very first Bullet Stratocasters was on the neck plate and the headstock, on which the Silver Squier Logo and the usual star with the decal “BULLET” displayed, was equipped with only one string tree; however, the serial number was very soon moved to the headstock and a second string tree was added afterwards.