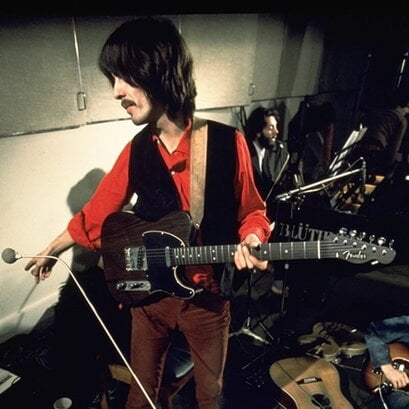 The custom guitar that Fender built for George Harrison was a Telecaster with a rosewood body and neck, serial number 235594, designed by Roger Rossmeisl and built by Phil Kubicki.  At the same time, Fender would also build a rosewood Stratocaster to give to Jimi Hendrix, which however, was never given in time to the American guitarist who died in September 1970.
After making two prototypes for each instrument, Roger and Phil selected the best ones for the two musicians, as recalled by Kubiki in the book The Beatles Gear by Andy Babuik: “I spent hours sanding the bodies to perfection.  Eventually, a clear polyurethane finish was applied and allowed to dry, and we selected the two best bodies and necks for Harrison and Hendrix.”  The bodies of the two guitars were made up of two pieces of rosewood sandwiched together by a thin central layer of ash.  According to Master Builder Paul Waller, who inspected the original instrument to build the reissue called by the Fender George Harrison Tribute Rosewood Telecaster, the neck was constructed from two glued pieces of rosewood and had a round-lam rosewood fingerboard.  The pickguard was black in three layers and the old Spaghetti Logo stood out on the headstock.
The instrument arrived in London in December 1968, on time for the recordings of the documentary film Let It Be directed by Michael Lindsay-Hogg.  The video stages the historic concert held by the Beatles on January 30, 1969 on the roof of Apple Records in London.  “I remember when I saw the guitar for the first time in the ‘Let It Be’ film.  I was so thrilled I almost jumped out of my seat,” Phil said.
The day after the concert, under the eye of the cameras, George Harrison recorded The Long And Winding Road and Let It Be using his Rosewood Telecaster.
​
In 1969 Harrison gave the guitar to Delaney Bramlett after attending his concert at the Royal Albert Hall in London.  In 2003, two years after Harrison's death, Delaney auctioned the guitar, which in the meantime had undergone major changes (a new gloss finish in place of the original satin finish and an enlargement of the body cutouts to accommodate two humbuckers).  The instrument was purchased for $ 434,750 by actor Ed Begley Jr, who was acting as an intermediary for Olivia Harrison, George's widow, and the guitar was restored to its original condition.
At the beginning of 1969, Fender listed the Rosewood Telecaster, which, at a price of $ 375, was the most expensive Telecaster due to the high production costs.  Perhaps also for this reason not many were made and it went out of production in 1972.
To lighten the weight of the guitar, Fender dug some chambers into the guitar body.
Unlike Harrison's Rosewood Telecaster, which had rosewood neck with a rosewood-capped fingerboard, the guitar made to be sold was a 1-piece rosewood neck.
In the following years, Fender again proposed reissues of the guitar, including versions made in Japan in the mid-1980s and 2007, others made in the Custom Shop in 2013 and 2016, and finally, with the model signature of 2022. 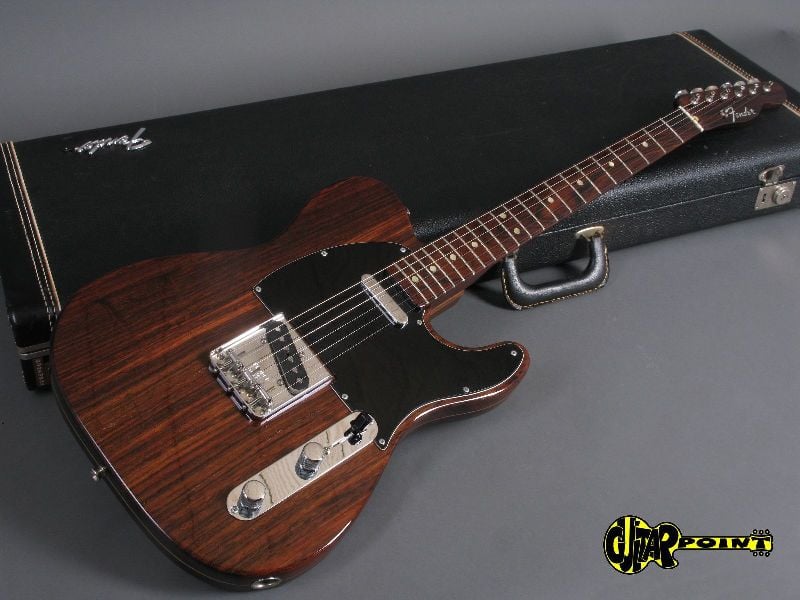