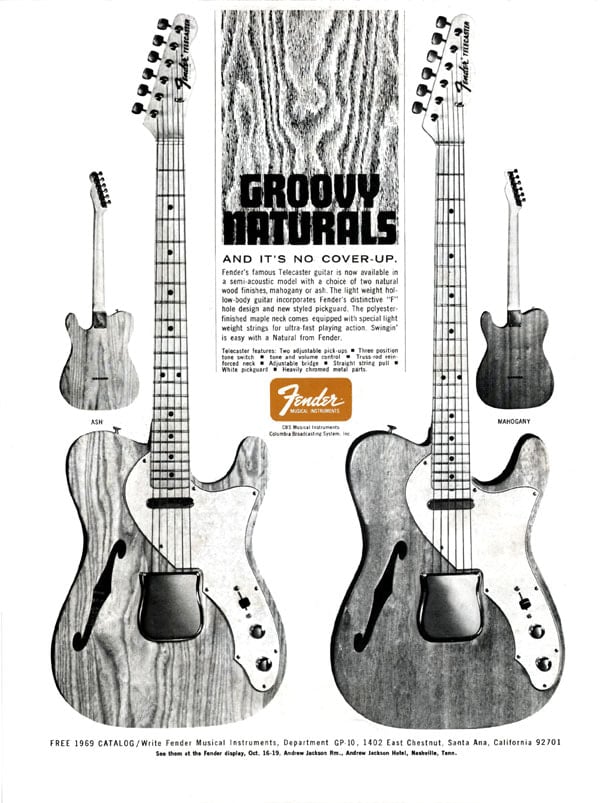 According to Forrest, Fender Sales was so impressed with the guitar made for Buck that he placed a purchase order, dated July 23, 1959, for what Don Randall would call the Telecaster and Esquire Custom.
​After 1965 Fender produced some Telecasters and Esquire Custom models with black binding on some models with light painted bodies.
It is interesting to notice that in the 1959 catalogue, the Telecaster and the Esquire Custom with rosewood fretboard had the walnut plug, probably because the truss rod in the prototypes was still inserted from the back of the neck.  Also, in the same catalogue, the standard Telecaster was still shown with the maple fretboard because the initial idea was probably to produce only the Custom models with the rosewood fretboard, but in a short time Fender decided to extend its use also to standard ones.
Even if in the first Telecasters and Esquire Custom models the strings were installed all on top of the body (top-loading system), as in the standard models, already in 1960 Fender came back to the traditional strings-through-body design.

In the 1959 catalog, the Telecaster and the Esquire Custom with rosewood fretboard had the walnut plug, probably because the truss rod in the prototypes was still inserted from the back of the neck

In the 1959 catalog, the regular Telecaster was still shown with the maple fretboard, whilst the Custom had the rosewood fretboard
This allowed for a stronger magnetic field compared to that obtained by Seth with Gibson PAFs, characterized by a single Alnico magnet under the coils.  The sound produced was brighter and the resistance of about 10kOhms guaranteed a higher output.
Around mid-1972, Fender redesigned the recently discontinued Telecaster Custom with a new Fender Wide Range neck humbucker.  Despite the name, this model had little to do with the original Telecaster Custom.  On a new black pickguard, larger than the previous one, a three-position switch and four knobs stood out.  The classic three-saddle bridge, used for the very first models, was quickly replaced by one with six saddles similar to that of the hard-tail Stratocasters. The new “tiltable guitar neck incorporating thrust absorbing pivot and locking elements,” also known by the name of Tilt-Neck or Micro-Tilt, patented by Leo Fender in 1970, allowed to modify the inclination of the neck through a small Allen key located in the anchor plate.  The truss-rod adjusting bolt was removed from the neck heel and housed in a bullet – hence the term bullet truss rod – located above the nut, all without disassembling the neck.  Furthermore, unlike the first Telecaster Custom, it was available in both the 1-piece maple neck version and the one with the rosewood fretboard. 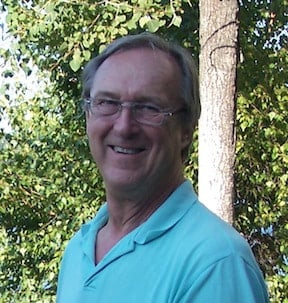 Philip Kubicki
The Telecaster Thinline, a hollow-body version of the historic Fender solid-body guitar, was introduced in July 1968 and appeared in the November 1968 edition of Fender Facts magazine.
The prototype, built by Phil Kubicki, was designed by Roger Rossmeisl, of the Research & Development department, who had already designed the Fender Coronado, helped by ​Virgilio Simoni, head of the Blank, Body and Sanding department.
But who came up with the idea of ​​building this model?  In an interview with Rick Batey for Guitar & Bass in 2015, Phil Kubicki stated that the request came from the sales sector, as had already happened for other Fender instruments: “Roger didn't think of it.  It came down from above.  We weren’t free to think for ourselves, we weren’t hired to think about new models.  The ideas came from the people that sell them.  You know, they might say ‘I want an electric that sells for $125.’  It wasn't something that I or even Roger generated.”
The final prototype was designed in 1968 using a technique that Rossmeisl had developed when he worked at Rickenbacker.  The body was hollowed out in the back, adding a large f-shaped hole on the front, and was capped with a thin sheet of the same wood.  “The body was carved out in the back on the f-hole side, and then the f-hole was machined in, then a matching back was glued on so it looked like a solid-body,” Phil Kubicki told Rick Batey.
The prototype’s body was mahogany: “The first one was mahogany, and as the guitar was mostly a stock item, we had a production body.  I mean, why should I route something out from scratch when I could just get it from the floor?”, Phil declared.  The prototype was so popular that the new Telecaster Thinline was marketed with both ash and mahogany bodies.  It had a larger pickguard and weighed about half the size of regular Telecasters.  Otherwise, the neck, hardware and electronics were identical to those of the regular Telecaster.
The Telecaster Thinline was introduced in July 1968 and appeared in the November 1968 edition of Fender Facts magazine, in the two versions with the body in ash or mahogany, with a Natural finish, both with maple cap necks, yet strangely, did not appear in the 1969 catalog.  Towards the end of 1968 it was also available in the 3-Color Sunburst finish as a standard option, in addition to the Custom Colors which could be chosen for a 5% surcharge, and the neck went back to being 1-piece maple, while, in 1969, the rosewood fingerboard was added upon request.
At the end of 1971 the Telecaster Thinline was redesigned with two Fender Wide Range pickups, a six-saddle hard-tail bridge reminiscent of the hard-tail and tilt-neck Stratocasters, and only in the 1-piece maple neck version.
​

First appearing in the 1973 catalog, the Telecaster Deluxe was the third with humbuckers and was the flagship model of the Fender Telecasters.  It can be considered a hybrid model, as, while maintaining the same body shape as the other Telecasters, it had the rear contour and headstock like the Stratocaster, two Fender Wide Range humbuckers like the second Thinline, an elongated pickguard with a three-way switch and four knobs such as the Custom, bullet truss rod, tilt neck and six-saddle bridge, and, on request, it could be equipped with a vibrato bar.  It was only available in the 1-piece maple neck version.

Despite the humbucker innovation, the three CBS Telecasters with Fender Wide Range pickups failed to appeal to musicians who aimed at the Gibson sound.  The Thinline went out of production in 1979, while the Custom and the Deluxe went out of production at the beginning of 1981.  The CBS management, that focused on large-scale production rather than quality control, together with an increase in prices due to general inflation and to the value of the dollar which did not facilitate export, caused the sales of Fender instruments to decrease significantly in the 1970s.