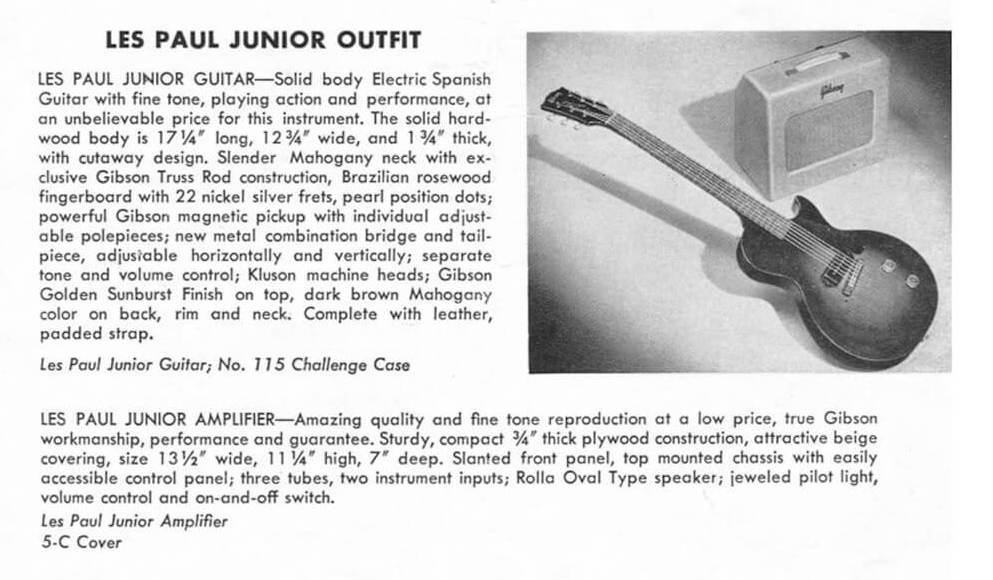 By 1954, Fender had not yet released a solid body line suitable for young musicians - the "small" Musicmaster and Duotone would only be presented a couple of years later.  For Gibson, which had already expanded its line of guitars and mandolins in the 1920s with the "Junior" models, economic instruments for young musicians, proposing an entry-level solid body line would have certainly meant reaching a new slice of the market which would have otherwise been cut off.  In addition, being built with the attention to detail and the quality typical to Gibson, it would have also attracted the attention of professional players.  These instruments were in fact widely used by Leslie West, Keith Richards, Mick Jones, Steve Howe, Dave Pevrett, Paul Westerberg and John Lennon. 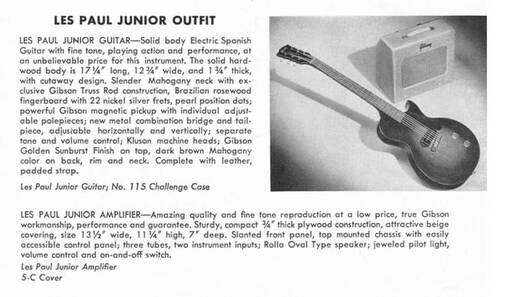 The Les Paul Junior on the 1954 catalog
The Les Paul Junior, unveiled in the 1954 catalogue, was manufactured with the same woods as its more expensive cousins.  It had a Honduran mahogany body, no maple top, and a flat (12") Brazilian rosewood fretboard on which circular markers stood out.  Despite the name, with its 24.75" (actually 24.56") scale and twenty-two frets, it was a "full scale" instrument.  On request it was also available in the smaller version (22.75"), with nineteen frets, useful for younger people and for those with small hands.  Some of the early 1954 models, as well as the ¾s, had western maple bodies instead of mahogany.  With no binding, it was an instrument with a flat top and not carved like the more expensive model, with a "golden" sunburst nitrocellulose finish characterized by a very intense yellow tint in the center.
It featured only one pickup P-90 "dog ear", with a slightly larger mask, voluntarily positioned very close to the bridge to have a brighter sound in order to contrast the typical dark mahogany sound; its proximity to the strings, compared to the P-90 "soap bars", was the cause of its more aggressive character, which made the Les Paul Junior famous among the rock and punk musicians of the '60s and '70s.  In 1956 the pickup was moved slightly away from the bridge to have a less metallic sound.
The 1954 and 1955 Les Paul Juniors had two "speed knobs", a master volume and a master tone, replaced by the "bell" ones during 1956.
On the headstock, characterized by a completely black truss rod cover, stood out a golden Gibson silkscreen logo (therefore not inlaid as in the higher-level models), a Les Paul Junior writing and the "3 on a plate" Kluson G-301-V tuners , with a plastic knob, used on all Gibson budget models.
The 1953 prototypes had a Goldtop-like pickguard, a Cremona Sunburst finish that would also be used on some 1954 Juniors.
The list price of the Junior was $ 99.50 in 1954 and $ 120 in 1957.  Although the profit margin for Gibson was very small, so many were sold that they were a real commercial success for Gibson. 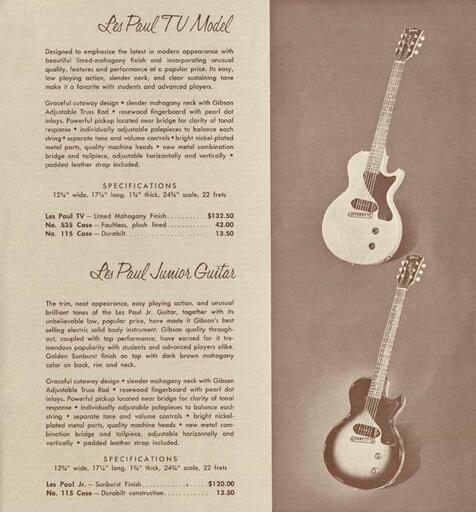 Les Paul Junior and TV Model comparison, 1958 catalog
“Designed to emphasize the latest in modern appearance with beautiful limed mahogany finish, and incorporating unusual quality, features, and performance at a popular price,” written in a catalogue from the late 1950s.
The Les Paul TV Model was an identical guitar to the Junior, except for the "Les Paul TV Model" lettering on the headstock and the body color, which the 1956 Gibson Gazette defined as limed-oak.  However later catalogues called it limed mahogany, a light yellow color that was very reminiscent of the Heywood Wakefield furniture which was very popular at the time and which stood out well in black and white televisions that were very popular among American families in the 1950s.  The first Les Paul TV Models of 1954 were ¾ guitars (22.75" scale), with a "full-sized" body in western maple, just like the Junior ¾. The neck was mahogany with a nineteen frets Brazilian rosewood fretboard.
In 1955 Gibson increased the size of the full-scale instrument (24.75") with a twenty-two frets fretboard.  At the end of 1955 Gibson began using mahogany instead of western maple for the body and the P-90 pickup was moved slightly away from the bridge in 1956.  In 1954 only five TV Models were released and in 1955 230.  The model was not mentioned on the price lists of 1954 and 1955, and first appeared in the 1956 Gibson Gazette at a price of $ 122.50. 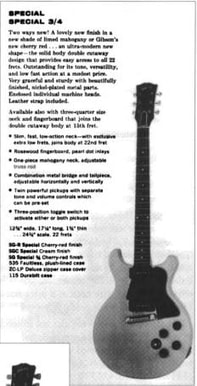 Les Paul Special on the 1960 catalog
In 1955 Gibson introduced, priced at $ 169, a new entry level model, similar to the Junior, but with two P-90 soapbar pickups, which they called the Les Paul Special.  Like the other economic ones, it did not have the carved top, but it differed from the Junior for the pearly logo, for the binding of the Brazilian rosewood fretboard, and for the four knobs - two volume and two tone - and a 3-position switch.  On the headstock, in addition to the initials "Les Paul Special", "3 on a plate" Kluson Deluxe G-301-V tuning machines stood out. The wrap-around stopbar stood out against the mahogany body, although some 1956 special order models had the Tune-O-Matic.
When introduced in 1955, the Les Paul Special had a Natural finish mahogany body, but the same yellow finish as the TV Model was soon adopted. Before the switch to the double cutaway model, some (rare) Sunburst and Cherry were made.
Pickguards and plastics were black, although in some early models they were brown, as the catalogue stated: "contrasting brown royalite pickguard and unit covers.”  The Les Paul Special was played by Santana, John Sebastian, Bob Marley and Jimi Hendrix.

In 1958 the Junior, TV and Special were redesigned with a mahogany body featuring a soft double cutaway: “The much lauded double-cutaway body is ultra-modernistic in appearance and practical in performance.  It gives these instruments a sleek, well balanced look while providing maximum access to all 22 frets,” Gibson Gazette stated.  The edges of the bodies were initially more marked, but over the course of 1959 they became blunter. The changes also concerned the colors: the Junior was available in the brand new Cherry Red finish, while the TV Model's Limed Mahogany finish became lighter - some would have dubbed it "banana yellow" - which went very well with the new tortoise shell pickguards; the Specials would also be sold in this new yellow finish, but already in the 1960 catalogue the Special was available in Cherry Red and Cream finishes. On the Specials the switch was first moved between the tone and volume knobs, then between the bridge and the treble volume pot. However, the tenon of the Special double cutaway model was very short, becoming the Achilles heel of this instrument.  The fragility of the neck of the new Special led Gibson to revise the position of the rhythm pickup which, in late 1959, was moved away from the neck to increase the amount of wood at the neck-body junction and the pickguard was redesigned.
The term "Les Paul" was dropped on the headstock of the Les Paul Specials in late 1959 and disappeared from the catalogue in 1960.  The new guitars were nicknamed "SG" - where "SG" stood for "solid guitar".  However, since the term "Les Paul" was dropped from the 1960s, only from the catalogue, but not from the headstock, on Juniors and TVs, many musicians continued to call these models "Les Paul".  The term SG then became official in 1963.

The Melody Maker on the 1960 catalog
Unveiled in the 1959 catalogue under the slogan "Small in size, big in quality and value!", priced at $ 89.50, the Melody Maker was Gibson's new "student" model.  Although the term "Les Paul" was not present on the guitar - there was only "Melody Maker" on the body, at the base of the neck - it was described in this catalogue as "Les Paul Melody Maker", but already in the 1960 catalogue the term "Les Paul" was omitted.
Initially it was only available in the version with only one pickup, both as ¾ and full-scale.  However, the full-scale Melody Maker D model with two pickups was also featured in the 1960 and subsequent catalogues.  The main features of this instrument were the very slim body, 1 ⅜" high, a very simple headstock and a pre-wired black pickguard on which pickups, electronics and jack input were mounted.  The Melody Maker pickups were cheap single coils already used on Skylark lap steel; they consisted of a coil with 8500 windings of an AWG42 wire and a magnetic bar in alnico, without adjustable poles.
Its prototype, exhibited at the 1958 NAMM, had a much larger pickguard; however, before going into production, in 1959, the guitar was refined and the pickguard shrunk.  In late 1961 the body switched to a soft double cutaway and, in 1966, to an "SG" body with two pointed missing shoulders and white pickguard.
Antonio Calvosa
​