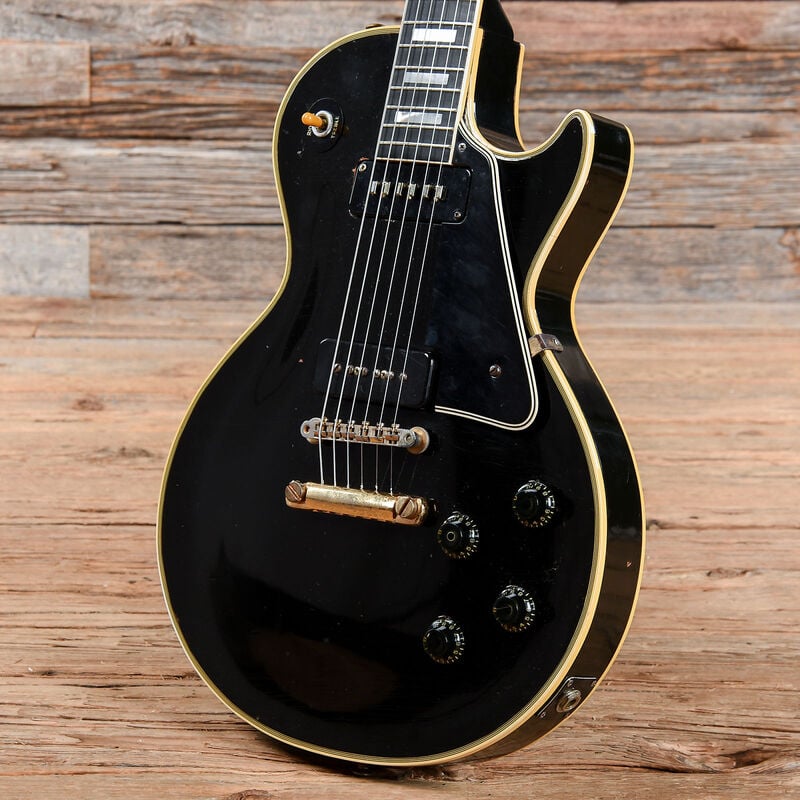 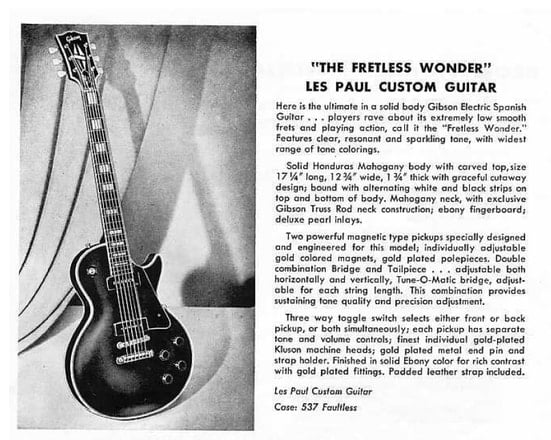 The Les Paul, 1956 catalog
After the success of the Goldtop, Gibson felt the need to expand the Les Paul line with new instruments.  The new high-end Les Paul Custom was unveiled in the summer of 1954, after the development of the prototypes, from late 1953.  It was nicknamed The Fretless Wonder for its flat and extremely low frets, very popular among jazz players in the 1950s.
The instrument was characterized by 24 carat gold-plated hardware and an ebony fretboard with mother-of-pearl fret markers.  The solid one-piece Honduran mahogany body with a carved top featured a new binding made of black and white stripes in celluloid and a four layers black pickguard.  The maple top was absent and the result was a deeper, darker and more resonant sound, far from the brilliance that the maple top could give.
The black finish, which reminded us of the old Orville, was chosen by Les Paul, who wanted a "Tuxedo Black" finish.   After sealing the guitar, six coats of a black nitrocellulose lacquer were applied over the entire body and neck.  The paint on the binding was then scraped off and some layers of clear coat were applied.  In the end, the final buffing and polishing were carried out.
Due to its elegance, this guitar is often nicknamed Black Beauty. 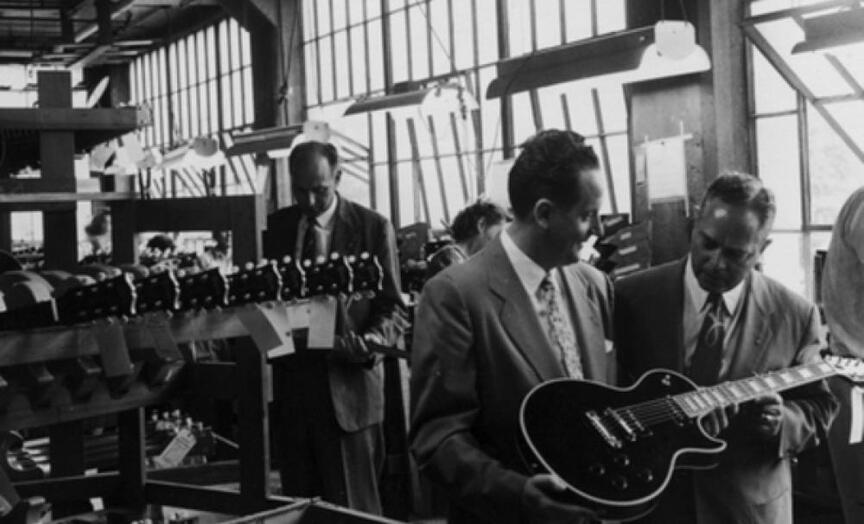 Ted McCarty show Les Paul the Les Paul Custom
The headstock, characterized by the same binding of the body, featured a split diamond inlay similar to that present on the Super-400 and a pearl-inlaid Gibson logo.   The truss rod cover read “Les Paul” in script and “CUSTOM” was engraved into the white.  The tuners were the Kluson GS-503-V Super "sealfast" with plastic “tulip” buttons.
At first no serial number was present on the headstock, in order not to damage its look.  However, Gibson started using them soon to facilitate identification. 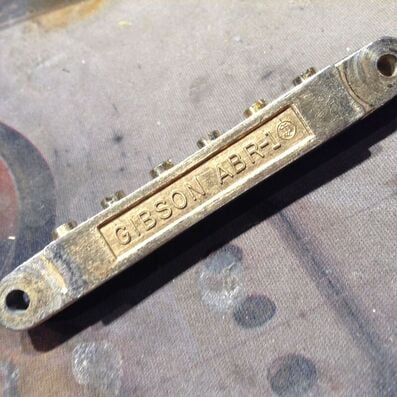 Both Tune-O-Matic ABR-1 and ABR-2 were cast "ABR-1" underneath, even if it was the ABR-2 (Courtesty of Chicago Music Exchange)
The new Tune-O-Matic bridge, drawn by Ted McCarty and his engineers in 1952, made its debut on this guitar and had been mounted on the Goldtops since 1956.  The patent was filed on July 5, 1952, but was definitively approved only on April 3, 1956.
This bridge gave the possibility to tune each individual string separately: “The ingenious Gibson Tune-O-Matic bridge removes intonation difficulties completely, making it possible, easily, to bring all six strings in tune throughout their playing length no matter what gauge strings are used,” as stated in the 1956 Gibson catalogue.
It featured a single metal saddle for each string.  The saddles could be moved back and forth thanks to six screws, which allowed adjustment for a very precise intonation even with the strings under tension.  Their individual heights were fixed so as to follow the radius of the neck, but it was possible to adjust the overall height of the bridge by means of two thumb wheel nuts.
This bridge was used in conjunction with a stopbar, which acted as a tailpiece, where the strings were anchored.
There were two Tune-O-Matic models, both in brass: the ABR-1, nickel plated, and the ABR-2, gold plated, though both were cast "GIBSON ABR-1" underneath - where "ABR" stood for "Adjustable Bridge".  The tailpiece was designed, at least initially, to be set adherent, or almost, to the body, with the strings that wrapped it from the top, which allowed for a greater resonance of the body and a more significant acoustic sound.  However, many guitarists started to mount the strings by letting them pass through the back of the stopbar, without wrapping it, therefore  increasing the angle of the strings on the guitar and making the sound a little brighter on the high notes, but leading to easier string breaking.  To overcome this problem, many guitarists began to increase the height of the stopbar as much as possible.
The bridge pickup was the P-90, but the neck was fitted with the new Alnico Pickup, developed by Seth Lover before the PAFs.  Seth began work on this pickup in 1952, returning from his service in the Navy, and finished it in 1953.  The new pickup had six square magnetic poles, in Alnico 5, each of which could be adjusted in height, by means of a screw.  This might suggest that the Alnico Pickup was meant to compete with Fender, but in reality it was to compete with DeArmond.  Its coil was made up of 10,000 AWG42 copper windings.  Its sound resembled that of the P-90s, but it was brighter and louder.  The power of the new magnets was such that it was necessary to be very careful not to bring the poles too close to the strings to avoid their vibration being attenuated by the attraction of the magnets, but also to avoid an unpleasant overlapping of harmonics.
Although at first the Les Paul Customs was equipped with the speed knobs, in 1955 Gibson started to use the hatbox or bell knobs for this guitar.
In 1957 the new Les Custom was unveiled; it was equipped with three humbucking pickups with golden adjustable poles!  In fact, some musicians, like Bobby Gibbons, had already asked Gibson some time before for some Les Paul Custom special order, with three pickups and three volume knobs and one master tone.  This was a very particular configuration.  The central position of the switch activated both the pickup at the bridge and the central one, therefore creating an “out-of-phase” sound.  However, not all the musicians appreciated the Les Paul Custom with three pickups and, as Johnny Winter did, asked Gibson for some custom order guitars with only two pickups.
During 1958 the Grover Rotomatics tuning machines, recognizable because on the back they bore the engravings "Grover" and "Pat. Pend. USA", replaced the Klusons.  They were considered as an upgrade, due both to their more durable and elegant appearance, thanks to the "kidney bean" metal knob, and to the increased turning ratio.
A peculiarity of this guitar is that the Custom Orders could be requested: some Les Paul Customs were modified according to the needs - or the habits - of the guitarist, so you can also find some Les Paul Customs with different finishes or even with the top in maple!
Les Paul was so impressed with this guitar that, together with Mary Ford, he almost exclusively started using a pair of black Les Paul Customs and a white custom order.
Antonio Calvosa
​