The birth of the Hank Marvin Signature Stratocaster 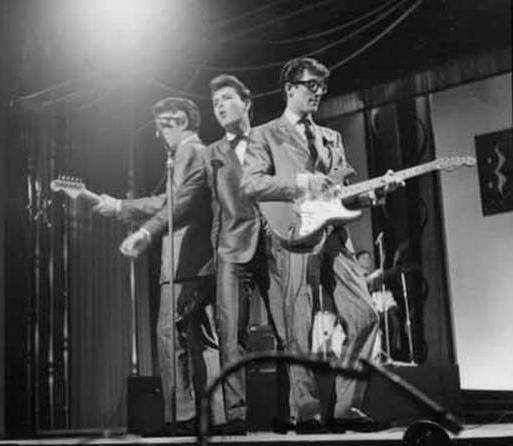 Hank, Cliff, the Red Strat and the reissue

Until 1959 the Stratocaster, due to an import law of 1951, remained a purely American phenomenon, though many British guitarists dreamed of the new American guitars.  In particular, Hank Marvin of the Shadows was obsessed by the sound of Buddy Holly and by that of James Burton, whom he believed that played a Stratocaster (actually it was a Telecaster).  When in 1959 this law was repealed, Hank could finally realize his dream and get his Fender.
Numerous legends circulate about the faded Fiesta Red ("Flamingo Pink" according to Marvin) Stratocaster, with gold hardware and maple neck, which Cliff Richard, original name Harry Rodger Webb, brought to his friend from the United States, which he had picked while on a promotional tour in the U.S.  One of these legends says that Cliff visited Fender factory and Leo personally gave him this guitar.  Other sources say that he simply bought it in a musical instruments shop.
After about a year Hank bought his first Stratocaster, this time with rosewood fretboard, and gave back the one with the maple fretboard to Cliff, who some time after had it repainted in white.  Currently the guitar, which according to many had been the first Stratocaster to arrive in England, belongs to the other guitarist of the Shadows, Bruce Welch, who had it repainted again in red by Barry Gibson (Burns Guitars), thus erasing any trace of the original color.
On February 12, 1986, John Hill, British Fender’s Brand and Artist Relations Director, organized a party in a Hilton Hotel in London to take a new step in the rebranding of post-CBS Fender and to celebrate a great moment in Fender history: the first Stratocaster to come to the UK, the Fiesta Red Strat of the Shadows guitarist, Hank Marvin.  This party was attended by Dan Smith and Bill Schultz, Hank Marvin, Eric Clapton, David Gilmour, Jeff Beck, and other English musicians.
On this occasion Dan and Bill showed Hank, who was about to move in Australia, a red Vintage reissue Stratocaster, whose neck plate was inscribed "To Hank Marvin with special thanks from your friends at Fender" and the date of the party.
The idea of building this special guitar to commemorate the first "British" Stratocaster was the brainchild of John Hill.  So Dan Smith asked to George Blanda to make a Fiesta Red Vintage reissue with gold hardware.  At that period Fender's brand new factory was still small and both the Signature Series and the Custom Shop didn’t yet exist.
The newly hired George Blanda began to work on the reissue of a 1959 Red Stratocaster in October 1985.  Actually it didn't take long; it was mainly an assembly work of parts already in stock.  It needed only special paint, a maple bird’s eye neck, and mostly the gold hardware, still not available from the factory of the new Fender.  He therefore decided to turn to the same company that produced it for CBS.  George remembers that they wanted to know how many hundreds of units were needed, but in reality he only needed one!
The "V000002" serial number of the guitar, however, could be deceiving. In fact, it wasn’t the second Vintage ever made, but the second made in the new Corona plant.
The Reissue given to Hank Marvin on the occasion of the party at the Holiday Inn. The meeting was attended by Dan Smith, Bill Schultz, Eric Clapton, David Gilmour, Jeff Beck, and other famous guitarists (Courtesy of John Hill).

The first MARVIN signatures and the Custom Shop models

A few years later, in 1990, the official Fender distributor in the United Kingdom, Arbiter, asked the Custom Shop to make a signature to Hank Marvin specs.  However, the contacts with the guitarist did not continue, maybe due to Arbiter’s and Fender’s superficiality, and when about twenty guitars - equipped with Lace Sensors and MDX circuit like that of Eric Clapton signature - were made, Hank called Fender and asked to stop everything.  The guitars which had already been built were retired, although some still appear to be around.
​ 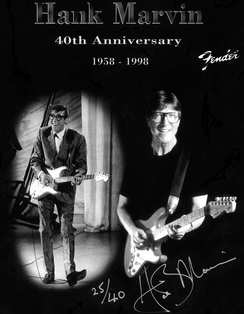 The Hank Marvin ​40th Anniversary Stratocaster and leaflet contained inside he case (penumbra.co.nz)
But the agreement between the guitarist and the Custom Shop was only postponed.  In 1992 the first Hank Marvin Signature Stratocaster appeared..  Commissioned by Fender UK and sold solely through the British distributor Arbiter, it was to be a limited edition of 100 copies.  In 1995, the production was extended to another 64 guitars, all equipped with two pickguards, of which one was signed by the guitarist: the Autograph Edition.  Both featured Vintage Fiesta Red alder body, highly figured maple neck, gold hardware, graphite nut, locking tuners and 2-pivot bridge.  The pickups were the Seymour Duncan Vintage Staggered SSL1 (at the bridge and in the middle position) and Di Marzio FS-1 (at the neck); a push pull switch on the second tone control activated the neck/bridge combination.
In 1998 it was the turn of the Hank Marvin ​40th Anniversary Stratocaster, replicated in 40 units, equipped with Kinman pickups, gold hardware and a neck plate bearing the "40 Years 1958-1998" engraving.  On the headstock, Hank's signature had a genuine ruby dotting the "i".  Unlike the previous ones it featured an ash body - Fiesta Red finished - and the vintage six saddle bridge.  The instruments were retro-fitted (in the UK) with LEDs, activated by a push pull switch on the first tone control, which were set into the fret markers on the upper side of the neck.  The push pull switch on the second tone control also activated, on this model, the neck/bridge combination.
In 2008 Howard Gillespie of Oasis Music, a Fender dealer in Great Britain based in Ringwood, Hampshire, commissioned Greg Fessler to produce 54 ​Limited Edition Dealer Select 1959 NOS Custom Red CRS-59 Stratocaster, also known as Shadows 50th Anniversary Stratocaster Collector Outfit, faithful reproductions of Hank Marvin's 1959 Fiesta Red Stratocaster.  The pickups, with the anomalous G pole pushed flush to pickup cover, were hand wounded by Abigail Ybarra, while the design of the bird’s eye maple neck was entrusted to Mick Johnson, a luthier with a passion for the Shadows.  Its profile was unique too: “C” shaped on the treble side; “D” shaped on the bass side.  "CRS 59", the xx/54 serial number and the Custom Shop Logo were engraved on the neck plate.  Contrary to what many think, “CRS” did not stand for "Cliff Richard Stratocaster", but for "Custom Red Stratocaster".
Gillespie’s goal was to create a guitar whose color was as close as possible to the original.  Not an easy task as Hank’s guitar had been refinished and every trace of the paint used by Fender had been erased: “Both Bruce and Hank are adamant that the guitar was a Flamingo Pink color and not a Fiesta Red, and we went to great lengths to get the color right.”  A custom color called "Flamingo Pink" never existed; however, in the '50s, Fender colors may not all be 100% accurate and the Fiesta Red could slightly vary according to the way it was applied, to the undercoat and the clear coat used. Environmental conditions and paint exposure could also modify the color.
In the end, it was Mick Johnson who caught that shade of red which, according to Bruce, was closer to the original.  The guitar was accompanied by a certificate of authenticity, a leather shoulder strap with the "The Shadows 50th Anniversary" logo bearing Hank’s and Bruce Welch’s signatures, a reproduction of an old Fender catalog, a CD with a conversation between Hank Marvin and Bruce Welch, and two tremolo bar: one shorter, modified by Hank, and the Easy Mute, a bar used for a long time by the guitarist, which allowed him to stop the strings while using the vibrato unit at the same time.
The Shadows 50th Anniversary Stratocaster was the only one, among all the Custom Shop Hank Marvin signatures, not to feature the Teflon nut, but the synthetic bone one, and to have 21 frets and a vintage-style truss rod.

THE hANK mARVIN sTRATS MADE IN jAPAN 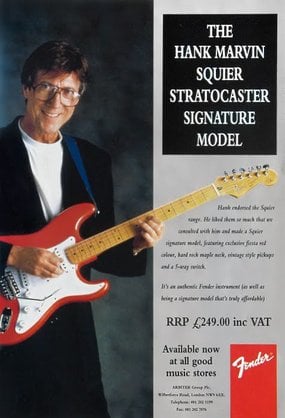 Squier Hank Marvin Stratocaster MIJ advert
There were also some factory Stratocasters dedicated to the guitarist of the Shadows which differed from those of the Custom Shop for the absence of the gold hardware.
The first of these was a Japanese Squier.  Until 1987 this brand was, with great success, made only in Japan. But when its production was moved to Korea in the late '80s, the quality of the instruments deteriorated considerably (plywood body, cheap electronics and hardware) which resulted in a slump in sales to which the strong competition from Korean copies at bargain prices contributed.  A halo of "negativity" began to surround the Squier brand and Fender decided, in late 1991, to once again manufacture some Squier models in Japan.  The Squier Hank Marvin Stratocaster, unveiled in 1991, was one of the first Squier of the '90s made in Japan: maple neck, Fiesta Red basswood (not plywood) body, ceramic pickups, Gotoh cast/sealed tuning machines, vintage-style truss rod and signature on the headstock.
Many believe that it was a guitar made in Korea because of some adverts of the first '90s picturing the guitarist of the Shadows with Korean Squiers. In early 1991 an advert portraying Hank with a Korean Squier bearing his signature, sort of a prototype of his Japanese signature, was published.  This advert actually referred to a guitar that never went into production, Torino Red finished, serial number S1xxxxxx (thus made in the Samick Korean factory), 1-ply 11-hole pickguard, maple neck, two wing string trees, and, obviously, the “MADE IN KOREA” decal on the headstock.
Also in 1994 an advert, in which the guitarist took up a Korean Stratocaster, but this time without signature, appeared.  A black Logo Squier, with a “CN” serial number.  It was a Korean Squier by Fender made in the Cort factory, not a Hank Marvin model!
In 1996, on the occasion of the fiftieth anniversary, Fender Japan proposed a new signature dedicated to the guitarist of the Shadows, simply called ​​Hank Marvin Stratocaster (this time Fender branded), exported to the UK only.  Ash body, polyurethane Fiesta Red finished, it was equipped with a vintage style bridge with “FENDER” stamped saddles.  The reference to the Shadows guitarist was clear: Alnico ’50 Reissue pickups, vintage style tuning machines, vintage style truss rod and 1-ply 8-hole pickguard.

THE hANK mARVIN sTRAT MADE IN mEXICO

In 2000 the Mexican Ensenada factory also made some signatures dedicated to the famous English guitarist. Based on the Classic Series '50s Stratocaster, the Hank Marvin Classic Stratocaster, sometimes simply called Hank Marvin Signature Stratocaster, was released only in Great Britain (350 units) and in Australia (60).  It featured a six saddle vibrato unit equipped with the Easy Mute tremolo bar, like the Custom Shop 40th anniversary.

The Mistery of the body Signed Hank Marvin Strat

Tony Bacon, in his book "The Stratocaster Guitar Book", talks about 300 Hank Marvin Stratocasters made in Mexico in 1997 and sold in Great Britain, similar to the Traditional Strats, with the guitarist’s autograph on the body.  Actually there is not much clarity about these models and Fender has no memory of them.  Vintage and Rare Guitars in Denmark Street, London, questioned on the subject, remembers a production limited to 12 units, born as Traditional (hence the Black Label Logo and the die-cast hexagonal tuning machines), on which Hank’s signature was affixed to the body later.  It seems that Arbiter ordered these Mexican Hank Marvin Stratocasters for the promotion of a guitar book for beginners.
Antonio Calvosa