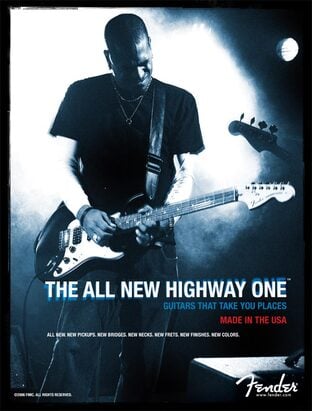 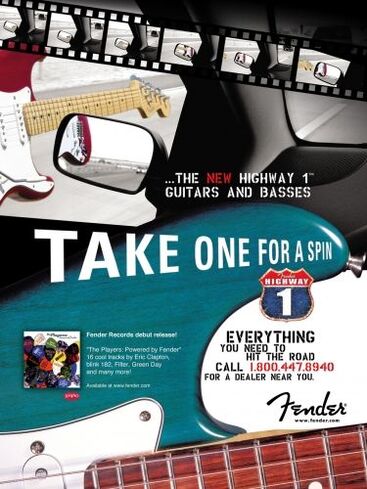 Highway One Series Advert
"Everything you need, nothing you don't" - this was the motto that Fender adopted in July 2002 to describe the newly born ​​Highway One Stratocaster.  In fact, this guitar had, at least in theory, everything that the Stratocaster needed, with nothing more.  It could be placed between the American Series and the Mexican Standard Stratocaster and it was the lowest priced Stratocaster made in US, thus occupying that market segment in which in the '90s were the hybrid Stratocasters made partly in US and partly in Mexico or in the East.
The Highway One featured staggered coil pickups made in Mexico, Ping tuning machines, and a vintage style bridge already used on the Classic Series of the '60s; so, the mounting space was like the string spacing, 2 7/32" (56mm).  In 2006 Fender decided to change the bridge of the Highway (they probably resolved to do this for some models from the end of 2005) assembling the same bridge used on the American Special, of Asian origin (distinguishable by the engraving "PW-36" present on the bridges manufactured by Ping) and characterized by the same mounting space as the previous one (2 7/32"), but with a smaller string spacing (2 1/16") just like the MIM Standards or some Squiers.
The neck and the body were manufactured and finished with satin lacquers (instead of the gloss finish of the American Series) in the Corona factory, while the case was a normal Deluxe Gig Bag.

2005 Highway One (Courtesy of Edmondo Di Bartolo)
In 2003 the version with Fender Atomic humbucker at the bridge was debuted, the​ Highway One HSS Stratocaster, which differed from the basic version also by the use of the large headstock. 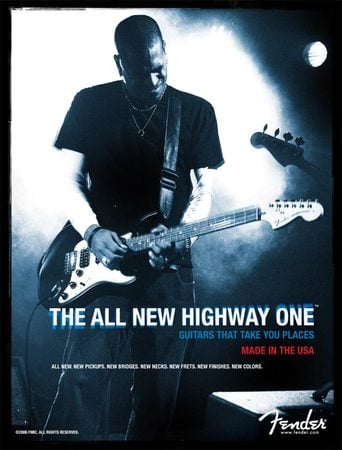 Highway One Second Series Advert
A few years later Fender renewed the series.  The new Highway One, exhibited at the summer NAMM 2005 and introduced in the catalog in mid-2006, distinguished itself from the first series by the large headstock and a new nitro finish.  As just stated, it had a different bridge than the one used previously, larger frets and the pickups were Alnico III.
The new tone controls were actually Greasebucket tone circuits (already mounted on the last models of the previous series) which Fender qualified with these words: "The Greasebucket tone circuit adds a new dimension to your tone, the effect is that when rolled down, the tone pot reduces the high frequencies, but does not add bass".  In reality this description should not be taken literally: the classic Stratocaster tone control cannot add low frequencies: no passive circuit can add but can only cut; however, by eliminating some frequencies, the others seem prominent.  So by cutting the treble, the bass sounds more pronounced.  The Greasebucket circuit behaved like a high-pass and low-pass filter, thus allowing the treble to be cut and damping the low frequencies, so as the knob is rolled off, bass boom isn't added in, making the tone control more usable.
Antonio Calvosa