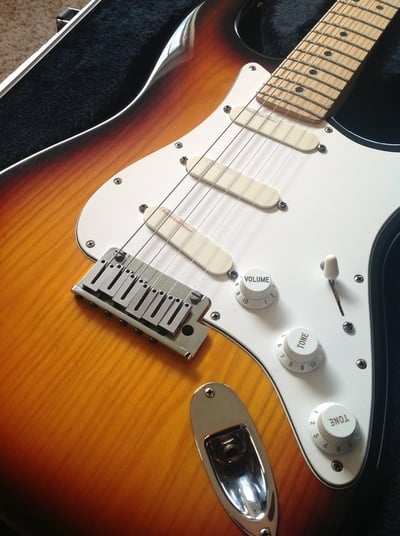 In 1983 Don Lace, chief of Actodyne General, a company engaged in the study and development of the possible applications of electro-magnetic fields, began to collaborate with Dan Smith to create a new generation of pickups without the typical single coil noise but characterized by the same tone.  Indeed, until that moment, the only attempts in that direction involved the use of the humbucker, whose sound was yet deeply different from a single coil. 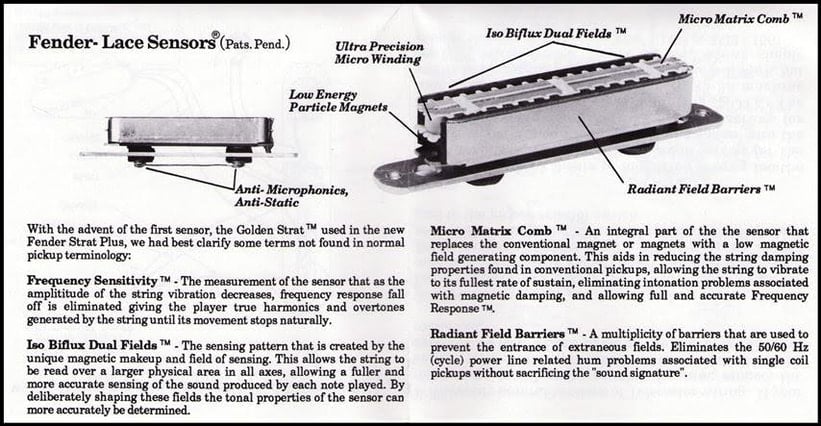 After the sale of the Fender in 1985, the contacts between Dan Smith and Don Lace intensified until a contract was signed in September 1986 and the first Fender Lace Sensor pickups were born.  After a short time other variants that could increase pickup sound nuances were conceived; in total four types of pickups were developed, identified by a color-based code:
​​
Moreover, it was possible to put two Lace Sensors side-by-side, thus constituting a sort of humbucker, although structurally very different.  Pickups built till the beginning of 1993 were recognizable as the "Fender Lace Sensor" logo printed on the surface the plastic cover, unlike the pickups manufactured from 1993 onwards where the logo was placed on an oval area slightly indented with respect to the remaining surface of the plastic.
Lace Sensors appeared for the first time in the Plus Series, but were used also on Deluxe American Standard and on Buddy Guy, Jeff Beck and Eric Clapton Signatures.  The last two guitars had been the last Stratocasters to mount the Lace Sensors, which in 2001 were replaced, probably not at the specific request of the musicians, but because Fender decided to install only their own "homemade" pickups, by Fender Noiseless.    ​
Antonio Calvosa