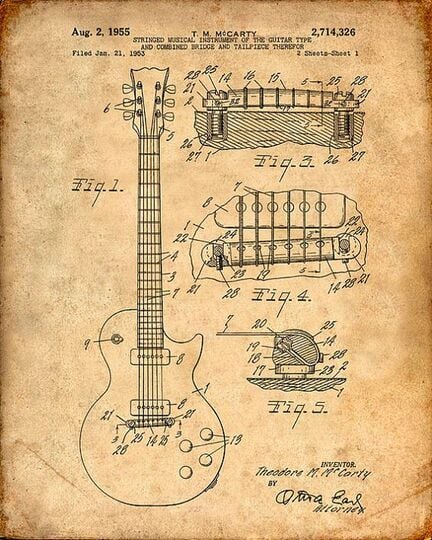 The stopbar patent
Ted McCarthy listened carefully to the criticisms of the 1952 Les Paul and understood that the bridge, as it was designed and used on the Goldtop, was no good.  He therefore studied and patented, together with his engineers, a new “combined bridge and tailpiece”.  The new bridge was often called Stopbar or Stud Tailpiece because the bar, made of a light aluminum alloy, “stopped” the strings, while two heavy brass stud      screws firmly anchored it to the body and acted as a pivot.  General intonation - not of the single separate strings - could be adjusted with two inset Allen side screws.  All parts were protected by a thin layer of nickel.  This new bridge is sometimes also referred to as the Wrap-Around Bar, as the strings were wrapped around the bar passing over the top surface.
The stopbar, patented in January 1953, began to be fitted to the new Les Paul mid-year; though the first “transition” Goldtop equipped with a stopbar still had the old neck-body angle, 1°.  To compensate for the new bridge the angle was first increased to 3°, until it reached 4° in 1954.
Despite the action being very high, if compared to current standards, thanks to the stopbar and to a greater inclination of the neck, the Les Paul had the strings at a better height, did not detune if picked firmly and could be played by stopping the strings with the right hand just as Les Paul liked, as was reiterated in the Gibson Gazette in 1954: “Notice the unique metal combination bridge and tailpiece with the string making contact on the top of the bridge.  With this new style bridge and tailpiece, which is both horizontally and vertically adjustable, the player may dampen the tone with the heel of the picking hand to achieve the muffled Les Paul tones and special effects that made this great guitarist famous.”
At the same time the carving became slightly more pronounced and the maple top thicker, so a longer maple strip was revealed.  Between 1953 and 1954 there were other small changes in routing and in the plastics, and the cutaway became shorter and the horn less pointed.  The circular ring with the gold engraving "RHYTHM" and "TREBLE" was added to the switch and the 1952 high barrel knobs were replaced by the speed knobs, that were slightly lower.  Serial numbers were issued starting only at the beginning of 1953 – the first Les Paul with serial number still had the trapeze tailpiece.
Since 1953 also the Les Paul model equipped with the Bigsby B-7 vibrato unit had been available, sold separately from 1955 for $ 50 – some guitarists later mounted it in place of the original trapeze tailpiece on the 1952 Goldtops.  This unit, in aluminum, was composed of a large bar, on which the strings were mounted, a black painted tail with the Bigsby logo and the patent number "D,169,120" and a second bar necessary to keep the strings under tension.  At first, a bridge that leaned the unit against the carved top, which due to its shape was nicknamed dog bone, and a fixed arm were used.  However, the B-7 was soon improved with the use of a swinging arm and a rocking bridge, adjustable in height with two lateral screws. The aluminum the Bigsby B-7 was made of tended to dull over time, in particular, the spring that kept the arm under tension often oxidized, shedding a white powder. 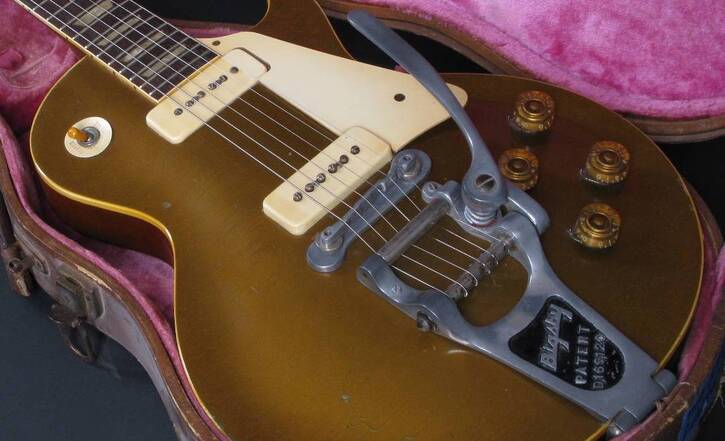 The "new" bigsby B-7 with the swinging arm and the rocking bridge, 1954 Les Paul (Courtesy of Guitarpoint)
With the growing demand for musicians to have a perfectly tuned guitar, the need increased to develop a bridge that could tune each string separately.  This became reality thanks to the ABR-1 Tune-O-Matic. Together with this bridge, the inclination of the neck was also definitively changed. Patented in 1952, almost simultaneously with the launch of the Les Paul Model, it was originally intended for Gibson's flagship guitars, and, at a later time, also for the others.  It was used on the 1954 Les Paul Customs and on the Goldtop from 1956.  With this new system the strings were attached to a stopbar which served as a tailpiece and, for aesthetic reasons, they reached the bridge, equipped with a single saddle for each string, without wrapping it.  However, only few people know that this bridge was created to be associated with a wrap-around stopbar.
Despite the initial success of the Goldtop, sales gradually began to decline from 1955. Even the Tune-O-Matic and the new humbucking pickups (discussed in the next chapter) that were mounted on the Les Paul in 1957, did not lead to an increase in sales.  It was clear that it was necessary to renew the Les Paul also in the graphics: Gibson then began to study new finishes, until presenting the Les Paul Sunburst in 1958.
Antonio Calvosa
​