War on hum: the humbucker

Seth Lover and the birth of the PAF 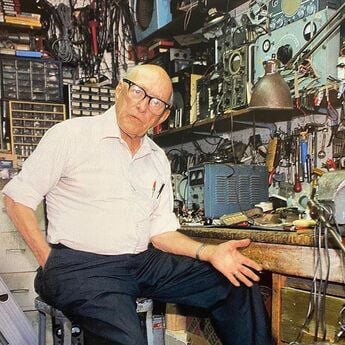 Seth Lover
If in the '40s the musicians had to face the problem of feedbacks caused by the acoustic box when they amplified a hollow-body, in the '50s, with the solid-body guitars, a new problem emerged: the increase in power of the amplifiers pointed out the excessive sensitivity of the pickups to external interference, which, in the presence of transformers or stage lighting systems, generated an annoying 60-cycle hum.
In 1954 Ted McCarty asked Seth Lover, under the supervision of Walt Fuller, to find a solution to the problem: in 1955 Seth developed a new pickup composed of two coils and an alnico M55 magnet, made by General Electrics and already used in the P-90s.
Each coil had about 5000 windings of 42 AWG copper wires and six pole pieces.  However the Gibson wrapping machines did not stop automatically and worked at a rate of 2060 windings per minute, according to Seymour Duncan.  So, many humbuckers had more than the theoretical 5000 turns, as often the workers who wound the pickups did not stop at the predetermined number of windings.
The two coils had the same winding direction, but they were connected in series, so that if in the first coil the current flowed clockwise, in the second one it flowed counterclockwise, and vice versa.  In addition, the two coils shared the same magnet, but the six poles of one were in contact with the south side, and the six poles of the other were in contact with the north side.
Both the interferences and the vibration of the strings generated alternating currents in the coils.  While      the currents generated by external interferences (their polarity depended solely on the direction of the windings) had opposite phases and canceled each other out, the signal generated by the vibration of the strings captured by the poles depended on the windings and also on the polarity of the magnetic field, which behaved like a second switch that brought the signal back into phase and therefore amplified it.
Ted McCarty declared that they were inspired by the clavinet, an electric clavichord in which the vibrations of the strings were detected by pickups consisting of two opposite coils.  The new pickup, called PU 490, is known as Humbucking Pickup.  It was Seth who gave it this nickname, when he showed the prototype to Ted saying: “Here's your humbucker!”  To test it other two prototypes were made which were tested with success on a Les Paul Goldtop with the endorser Rem Wall.

The coils of the new pickups weren't dipped in wax, as it was feared that high temperatures could deform the plastic they were made of.
Instead of firmly attaching it to the body, as had happened for the P-90, they preferred to mount the humbucker on the guitars using a plastic ring produced by Hughes Industrial Plastics and a base plate equipped with two metal flanges with springs, so as to leave it suspended and not adherent to the body.  This system allowed for more independence from body vibrations and more sensitivity to the vibrations of the guitar strings.
Ted McCarty asked to equip the coil with south polarity with height-adjustable poles.  In fact both the P-90 and the Alnico Pickup that Seth had created a few years earlier were equipped with adjustable poles, and not using them on the new model would have been perceived as a step backwards.
To protect it, Seth covered the new prototype with a very thin stainless steel mask, which had low electrical conductivity, but he decided not to plate it because he thought the high frequencies would be affected. Gibson tried to paint the mask with a gold finish, which yielded under  energetic strumming, so they preferred to plate it with a thin layer of gold or nickel and silver, which he called “German silver”.  However, some British guitarists, such as Eric Clapton, Jeff Beck and Alvin Lee, removed the covers from the pickups of their Les Paul, leaving the coils visible, to obtain a brighter and more powerful sound.

The "Patent Applied For" label responsible for the PAF nickname given to these humbuckers
On June 22, 1955, Gibson applied for a patent (number 2,896,491), but didn’t use the pickup, probably because they preferred to wait until it was approved first. However, on January 22, 1957 Gretsch asked for a patent for its humbucking pickup, the Filter'Tron, developed by Ray Butts.  Gibson then realized they couldn't wait any longer and decided to put Seth's pickup on the market. In order to protect his invention, Gibson placed, the sticker bearing the words "Patent Applied For" on the back of the humbuckers, hence the PAF nickname given to these pickups – on the contrary, the first humbuckers, without this sticker, were nicknamed pre-PAF.  In 1962 a label indicating the patent number "2,737,842" began to gradually replace the "Patent Applied For" one.  However, strangely this number was not referring to the humbuckers, but to the Les Paul trapeze tailpiece!
On February 17, 1957, the first ES-175 with humbuckers appeared in the Gibson logbook, labeled “A-25000 H.B. starts here”.  Though some prototypes and special models were made in 1955 and 1956, the Les Paul Goldtop had begun to be officially equipped with the new humbuckers in the spring of 1957.  Many collectors refer to these Les Pauls as Golden Anniversary or Golden A.  Humbuckers soon began to be fitted regularly with the Les Paul Standards, even if some players ordered it with the P-90s.
Ray Butts was the first to obtain confirmation of the patent, despite having applied for it a year and a half later.  However, no one can doubt the originality of Seth's pickup.

The rest is history: “Without the PAF, our industry and the sound of music of the last 60 years would be quite different”, Paul Reed Smith, founder of PRS Guitars, declared.  At the end of the '60s rock guitarists started to understand the potentials of these pickups, their unique timbre, the way they saturated the amp tubes, and started to appreciate the subtle differences between late 1950s PAFs and later models.
But beware of the many myths that circulate around PAFs.  One of these refers to the color of the coils.  The first ones were made of a black butyrate-based plastic polymer.  In 1959, due to the temporary unavailability of the black pigment, Gibson bought the same coils from the same company but they had a white color - which has slightly yellowed over time.  Since there were still a lot of black coils in the factory and the humbuckers were covered with masks, Gibson workers paid no attention to the color of the coils when assembling the humbuckers and it is possible to find 1959 pickups with both black coils, called black bobbins, others with both white coils, nicknamed double white or full cream, others mixed, nicknamed zebra.  In 1960 the black pigment became available again and the white coils gradually disappeared.  The rarity of double white and zebra coils, compared to the more common black bobbins, coupled with a slight increase in the number of turns in PAFs in the late 1950s, created a mystical halo around these pickups.  But the sound of the pickups is independent of the color of the coil!  Even pickups bearing the "Patent Applied For" label and those bearing only patent numbers made in the same period were absolutely identical.

Other changes, however, may have affected the sound, such as the switch, in 1960, from the M55 magnet to the smaller M56, both in alnico, and, above all, from the use of plain enamel insulation on the "PAF" humbuckers and the first "Patent Numbers" to the polyurethane in the 1960s.  At the same time also the use of new winding machines led to small differences in the windings and therefore also in the timbre of the humbuckers.  In the late 1960s other stronger magnets were used, probably in alnico V, and in the 1970s also those in alnico VIII.
Antonio Calvosa​