LES PAUL: THE MAN WHO INVENTED THE NEW SOUND 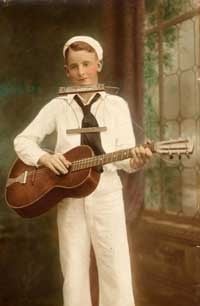 A young Les Paul with his Sears Troubador and harmonica
Lester William Polfuss was born on June 9, 1915 in Waukesha, Wisconsin, to George Polsfuss and Evelyn Stutz.  Lester was of German origin – his paternal grandfather, August Polsfuss, was born in Germany and emigrated to the United States in 1870, while his  maternal one, Wendle Stutz, arrived in the United States from Germany in 1881.  George decided to give up the central “s” of his surname, even if this change was never formalized.
The young Lester showed outstanding artistic qualities from his earliest years.  At the age of three he already knew how to sing and dance with ease and at eight, he was very skilled with the harmonica.  In a short time he also learned to play his mother’s piano, but soon his attention was captured by guitars and banjos.
Claud J. Moye, also known as Pie Plant Pete, a guitarist who Les and his mother went to see regularly, took little Les under his wing, teaching him the basics of the guitar.  Evelyn bought his son, his first guitar, from a catalogue, a Sears Troubadour, for $ 3.95, and Les started to play in clubs under the nicknames, invented by his mother, Red Hot Red, at first, and then Rhubarb Red, due to his reddish hair and freckles.  He played live, as well as with Pie Plant Pete and also with other important local musicians, among which Rube Tronson, Sunny Joe Wolverton and Fry Peters.  His radio performances were also numerous.
To make himself feel better during his concerts, he built a small amplification system and mounted a phonograph pickup on his guitar.  In a short time he bought his second guitar, a resophonic Dobro/National, and, after a visit to the Kalamazoo Gibson Company in 1932, he received a $50 Gibson L-50 archtop as a gift from Sunny Joe.  This was the first of a long series of Gibsons that Les played throughout his career.  During the visit to the factory, Les and Joe appreciated how these guitars were built: “The craftsmen would tap the top of the guitar and listen to the tone of the resonance.  He tuned it to a certain pitch, which was very important.  So that's the key to those old L-5 guitars.”
​
Over time, Les moved away from his folk origins and became fond of jazz.  In the mid 1930s, together with the bass player Ernie Newton and the rhythmic guitarist Jimmy Atkins, Chet’s older brother, he formed the Les Paul Trio, joined the Fred Waring Orchestra and performed many times in New York with Charlie Christian of the Benny Goodman Sextet.  In this period hollow-body electric guitars were in their prime and Les started to play other Gibsons, like the L-7, equipped with pickup ES-300, the ES-150 and the L-5 with two pickups.
In 1940 Les moved to Chicago, where he was hired as director of the radio station WJJD and  played many times with Ben Bernie at CBS and with George Barnes, another very famous guitarist in Chicago.  Les started collecting numerous Epiphone Zephyrs because they were cheap instruments suitable for the many experiments to which he was devoted.  In addition to testing numerous pickups, he often mixed, (literally) parts from different guitars – as in the case of the famous 1941 “Log” guitar.
​
At the end of 1941 Les Paul moved to California, where he started to play with musicians like Bing Crosby, The Andrews Sisters and Hedda Hopper, and made numerous recordings with Decca Records.  He formed a new trio with Cal Gooden on rhythmic guitar, Paul Smith on the piano, and Clint Nordquist on bass.  He even took over a venue he called the Les Paul Club.
In the mid '40s Les, unsatisfied with the quality of the recordings he had made, decided to build his own recording studio, the Les Paul Garage Studio, which initially was in North Curson Street, Hollywood, but was later moved to Pasadena.  The push to go down this road came when his mother mistook George Barnes for him at the radio.  One day, after a common session, he was discussing the poor quality of the recordings with his friend Bing Crosby who asked him why he did not open his own studio in order to obtain the desired sound, but Les at first answered he was too busy to do it.  However, only a few minutes later he changed his mind: “Why the hell not! I'll make my own records and get the sound I want!” 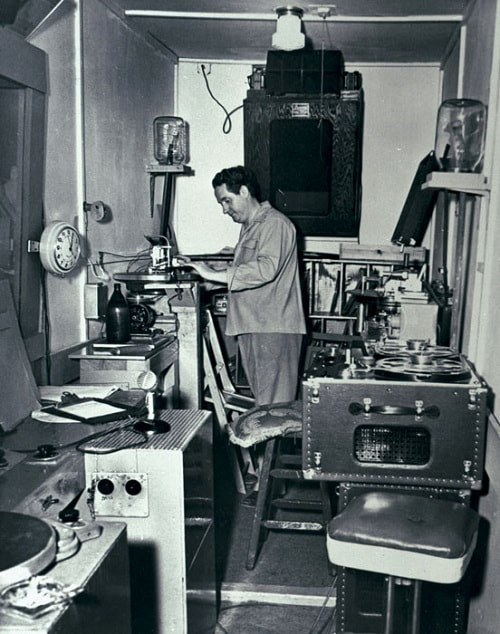 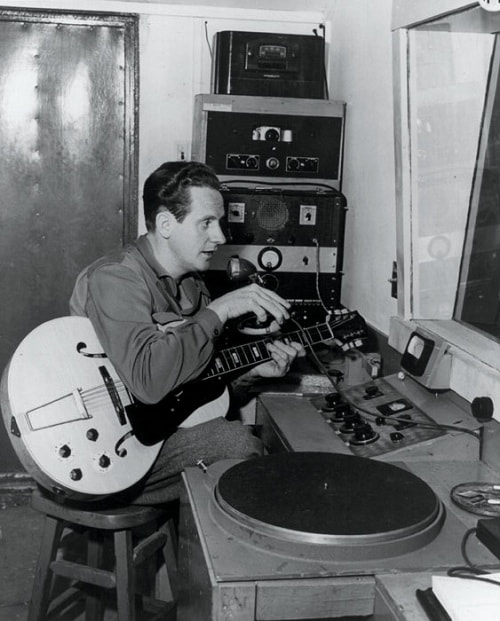 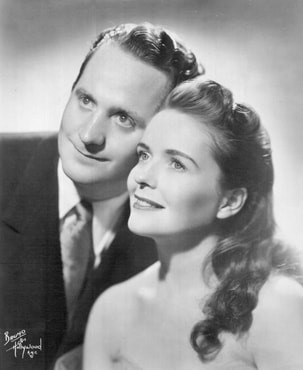 Les Paul and Mary Ford, 1953 - (NBC Television photo by Bruno Bernard, dubbed Bruno of Hollywood)
Les was looking for his own sound, which his mother would always recognize.  Les's first step in achieving a different sound was to have the musician play very close to the microphone as opposed to the accepted recording practice.  He experimented a lot (he used the flywheel of a Cadillac as a lathe to record discs!) and developed many recording techniques such as the overdubs, which he called sound-on-sound.  Les stated that he had already designed them in 1936, when, in order to try new songs, he used to record the bass and rhythm guitar part and then play over the solo part: “The only reason that happened was because I didn't have anyone around to jam with that I wanted to try out runs, so I would make a multiple.”  One of the most important consequences of the overdub was lo slap-back echo: “I didn't realize it had the potential until I ran into the echo that I could produce by feeding back - looping back the original sound off the disk.”  The “new sound” was born.
Only one thing was missing: a female voice to add to recordings.  The choice fell on Iris Colleen Summers, who Les nicknamed Mary Ford.
Unfortunately, on January 11, 1948, Les and Mary had a bad car accident.  They were returning from a visit to the Waukesha house, when Mary lost control of the car due to ice on the road. The car fell into a stream that was about ten meters below the road and some hours passed before rescuers arrived.  Mary got away with minor injuries, but Les, who had protected the woman with his left arm, suffered numerous fractures, including three in his left arm, and his elbow was severely compromised.  Doctors discussed what to do for a long time.  The chances of saving the arm were very slim, but Dr. Robert Knight, head of the team that would have operated the musician, knew of his patient’s skill on the guitar and did his best to save Les’s career.  He fixed the forearm with seven nails so that it was at a ninety degree angle to the arm, allowing him to continue playing.  Rhubarb Red's career was saved.
His two instrumental singles, Brazil and Lover, were released shortly after the accident, on February 23, 1948, and were very successful, giving Les who was undergoing a long and painful rehabilitation, the strength not to give up his career as a guitarist.
​​
Little by little, Les resumed playing with Mary, who accompanied him, as vocalist as well as, on the rhythmic guitar, and with Wally Kamin as bassist.
It was a good period for Les and Mary, who married in 1949, and thanks to the collaboration with the Capital Records, they recorded many hit songs, including It hit like a gangbuster, Mockin 'bird hill, I'm sitting on top of the world, Nola, Tennesee Waltz, Tiger rag, In the good old summertime, Meet Mister Callaghan, Bye, bye blue, Vaya con Dios (may God be with you), How high the moon, Just one more chance, I really don't want to know and Whispering.  In addition to emerging because of the talent of the musicians, these songs captured the attention of the public due to Les’s “new sound”.
The two were also engaged in intense television and live activity, both in the United States and in Europe, and in France Les Paul met one of his legends, Django Reinhardt.
But in the mid '50s success and sales began to decline, both because of Capitol’s careless ability to push its records and for the growing success of a new musical genre, rock'n'roll.  Les and Mary also tried with Columbia Records, but times and musical tastes had changed radically and despite the production of songs of undoubted quality, their success did not return.  Their private life also underwent a slow deterioration, and the two divorced in 1963.
During his career Les played many Gibsons and, in 1951, Maurice Berlin of CMI (Chicago Musical Instruments), the distributor who controlled Gibson between 1944 and 1969, and Gibson president Ted McCarty, in office between 1948 and 1966, signed an agreement with the guitarist for the creation  of a solid body guitar that bore his name: the Gibson Les Paul. 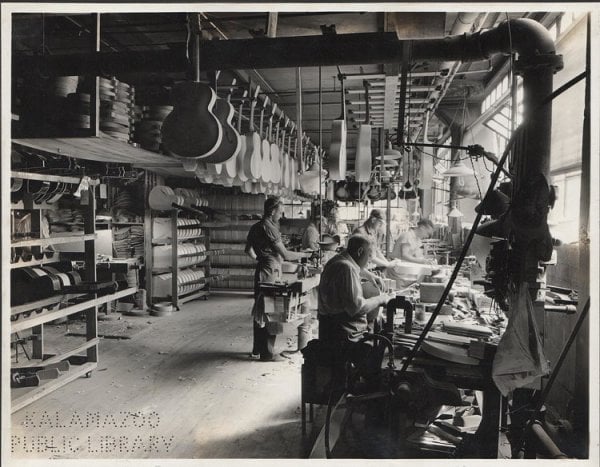 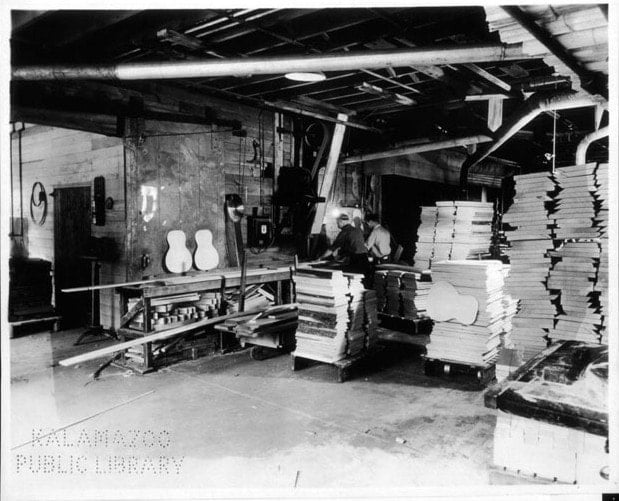 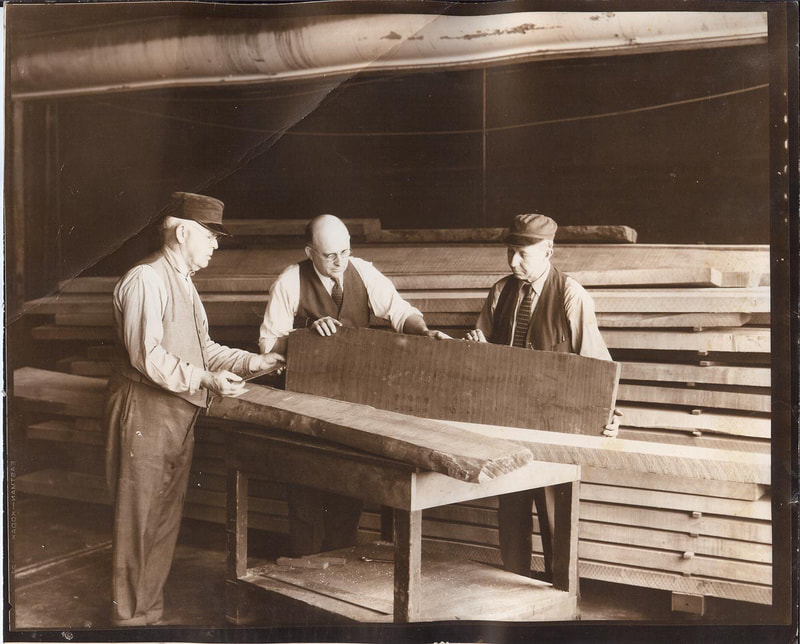