In the first half of the 1900s many musicians and inventors ventured into the design and construction of Spanish solid-body electric guitars.  The Spanish electric guitars, in fact, were all hollow-body and produced feedback and unpleasant sounds when played through an amplifier at a loud level, making these guitars unpopular, especially because guitarists could not stand out in orchestras.
In the '40s two musicians approached Gibson proposing their models of solid-body guitars, but it wasn’t the right time for a conservative company like Gibson.  However, in 1950, when Gibson decided to dive into the world of solid-body electric guitars as a response to the Fender Esquire, it surely took a lot of ideas from these two old projects: the App and the Log.

O.W. APPLETON AND THE APP 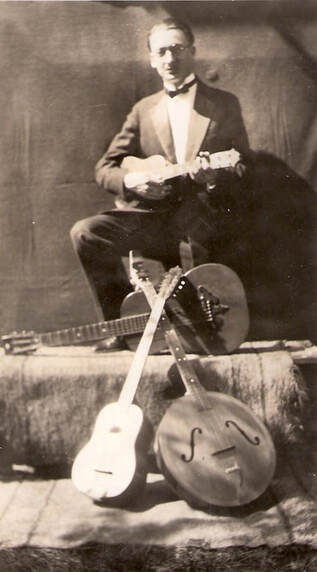 O. W. Appleton, circa 1925, posing with instruments made by his father, Jamie F. Appleton (Courtesy of owappleton.com)
Orbra Wallace Appleton was a musician and inventor from Burlington, Iowa, who could play many stringed instruments like the ukulele and the banjo, but his great passion was guitars.  In 1926 he opened his App's Music House store, which was followed, about 25 years later, by the App's School of Music.
Around 1925 he used the tone arm of a RCA radio-phonograph to amplify his acoustic guitar.  During the '30s, Orbra experimented with many pickups and amplification systems and came to the conclusion that the "hollow" body of acoustic guitars was detrimental to amplifying the vibrations of the strings of the electric guitars.  Therefore, if he decreased the vibrations of the top and bridge, he would get a better sound.
He took various possibilities into consideration (also that of filling the guitar case with sand or salt!), but obviously the most reasonable choice was starting from a board to build a solid-body.  He then took a plank of pine from a local lumberyard and gave it the shape of a guitar with a single cutaway and rounded top, on which he mounted a "raw" Gibson neck.  His "APP" guitar was incredibly reminiscent of a Les Paul, enough to lead one to believe that Gibson was inspired by its shapes in the design of its solid body.
In the early '40s Appleton went to Gibson to see if they would be interested in manufacturing the model, but nobody gave credit to his invention.  Moreover, in the small town where he lived, he didn't have access to a patent attorney – this also made him a victim of some scams – and due to the Second World War, the dream of starting a small production of electric guitars finally vanished.
About ten years later, in 1952, Appleton received a letter from a friend who worked at Gibson: “Well, App, you see our competition [Fender] has finally forced us to come out with your solid guitar.  Sure wish we had listened to you back in 1943.”  Overwhelmed, Appleton threw the letter away.

The App guitar is incredibly reminiscent of a Les Paul (Courtesy of owappleton.com)

In the late '30s Les Paul also tried his hand at building a Spanish solid-body guitar, with the intent of increasing the sustain and producing a more brilliant tone than the hollow-body’s.
Les made the instrument out of a 4" by 4" block of Oregon pine to which he attached a Gibson neck.  The guitar, which Les called "Log", was about 2 feet long, more or less the size of an archtop guitar. He added two home-made pickups and the vibrato unit patented by Doc Kauffman, the Vibrola.  After playing the instrument in public and noticing the perplexity of the audience, Paul added the two “wings” to the pine body, taken from the body of an Epiphone cut in half, making it look like a conventional guitar.  “People hear with their eyes,” Les declared later in an interview about his Log.
After making a first unsuccessful attempt with some of the Epiphone executives, in 1941 Les tried to propose his Log to Gibson, with the hope of starting large-scale production of the Log, but with no success.  Gibson's top management defined it as a “broomstick with pickups”.  “I took the Log to Gibson and I spent 10 years trying to convince them that this was the way to go,” Les Paul declared later.
Today, the Log can be admired at the Nashville Country Music Hall of Fame.
Antonio Calvosa
​ 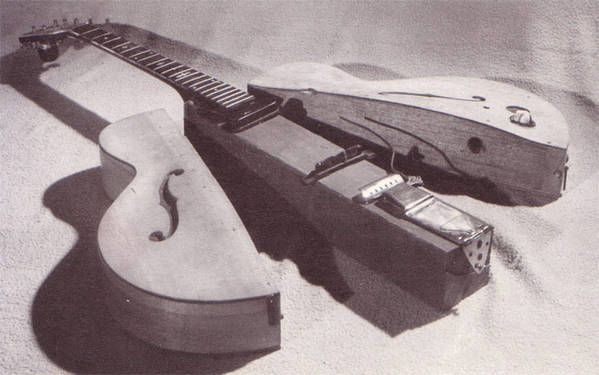