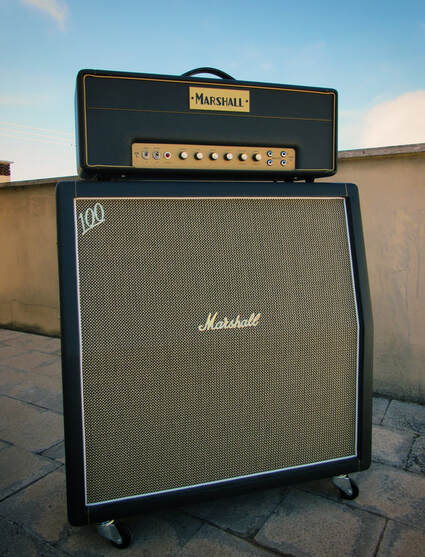 Furthermore, nowadays there are important bureaucratic and safety constraints on production, so the difference between the 2245 and the original should not come as too much of a surprise. Actually, precisely because of a tightening of these regulations, the first reissues were withdrawn in 2001 in all countries except the USA and Japan, only to be reintroduced in 2002.
However, to make the sound of the 2245 as close as possible to the original, the same circuit as the JTM45 was used in modern times (but on PCB).
There are three 12AX7 (ECC83) preamplifier tubes and two 6L6 (5881) power tubes - not the famous KT66, since these were not available in sufficient quantity to satisfy the production of the reissue.  Moreover, it should not be forgotten that, in reality, the first power tubes used on the very first JTM45s of the '60s were precisely the 6L6s and not, as is often believed, the KT66s, which were used only later.
The transformers are made by Dagnall, like those of other current Marshalls: the D2505 as output transformer and the D4192 as power supply, while the choke is the D2475.  Perhaps the best choice would have been Mercury Magnetics transformers, a company that reproduces the famous Drakes used in the '66 JTM45s and the Radiospares used in the early head units.
A GZ34 rectifier tube helps recreate the compression and sustain that made this amp famous in the past.
Connecting a Les Paul to this amp plunges you totally into territory that smacks of Free, Led Zeppelin and early AC/DC, all the way to more Slash-like distortion.
In the JTM45 you can fully recognize the ‘Marshall sound’ of the 60s, it is suitable for blues, for rock, but, from my point of view, with a Stratocaster it is at its best in clean tones.  It's as if this amp incorporates the sound of the guitar, analyses it through a series of filters and lenses, and returns it with the addition of a bit of colour here and a bit of focus there, but without ever transforming the sound into something different.  This also means that you hear every mistake, but at the same time the JTM45 rewards you with such a sweetness of sound that everything seems easier.  Obviously it is not the right amplifier for shredders and heavy metal guitarists.
On the gold plexiglas front panel are the four inputs for the two channels (two high-sensitivity, two low-sensitivity), power and stand-by switches, presence, bass, mid, treble and volume controls for each channel.  Yes, it is true, there is no effects loop on the rear panel, but neither was there in the original!  And in any case, the JTM45 takes pedals very well when placed in front of the amp.
Both channels sound great.  The first one is brighter and sharper, with a punchy and well-structured bass. The second channel, on the other hand, is decidedly darker, fuller and warmer, and is very well suited to harsher fuzz and harder distortion. There is something magical, however, that happens when you exploit the old trick of ‘linking’ the two channels with a patch cable.  If you manage to find the correct balance between the two channels, the sound becomes decidedly more balanced and harmonic.
Obviously, as for all the amplifiers of that era, the sound gets much better when you turn the volume knob.  All the corners of the room, in fact, are filled with an overdrive that initially only slightly dirties and colours the sound, and then gradually transforms it into that ‘British crunch’ that made the JTM45 famous, not too aggressive, but definitely rock, dirty to the right point and slightly mixed in the bass.
The wattage is around 30 watts, but don't be fooled, it is a very loud 30 watts.  It is not an amplifier for home use.  Its power can always be heard, although it is very controllable, different from other amplifiers.  It enters the mix like a knife would cut through a slice of warm butter.
To conclude, the reissue is not the JTM45 of the 1960s, but it has a sound of its own that recalls it very well.  You should be proud to own one, no matter if the valves are different, if the transformers and resistors are not what they used to be.  The important thing is to plug it in, turn it on and savour the sound, forgetting what's inside.
​

From an aesthetic point of view, I eliminated the classic white Marshall ‘script logo’ to replace it with the more dated golden ‘block logo’ and I changed the squared led with a rounded one reminiscent of the early JTM45.  I replaced the original power tubes initially with Electro-Harmonix 6L6GCs, later with two TAD KT66 tubes.  I don't think one solution is better than the other, both tubes sound great with this amp, but the KT66s 'thicken' the sound and make it more distinctive.  However, we remain in the realm of taste and nuance.
I have fitted the head with a Master Volume control that can be activated or deactivated by means of a switch on the rear panel, so that the saturation of the power tubes can be used more easily.  However, I still prefer the sound of the ‘pure’ JTM45. 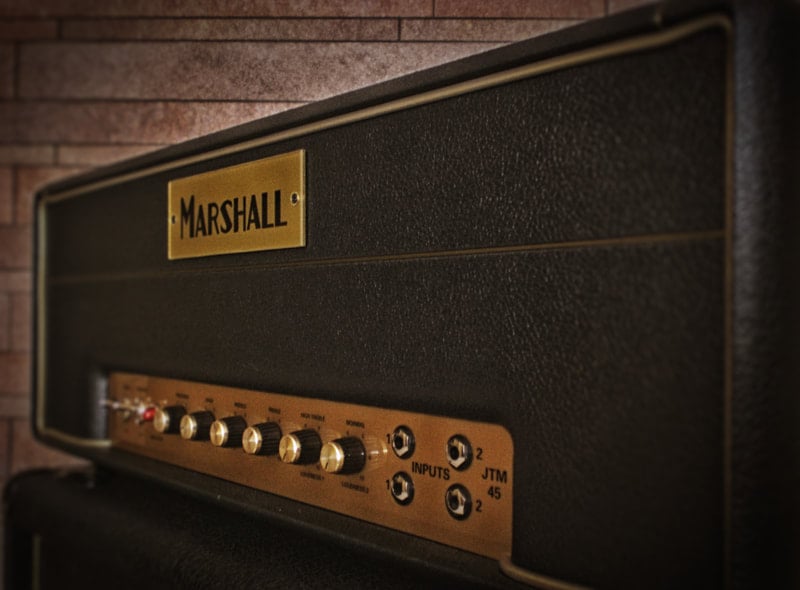 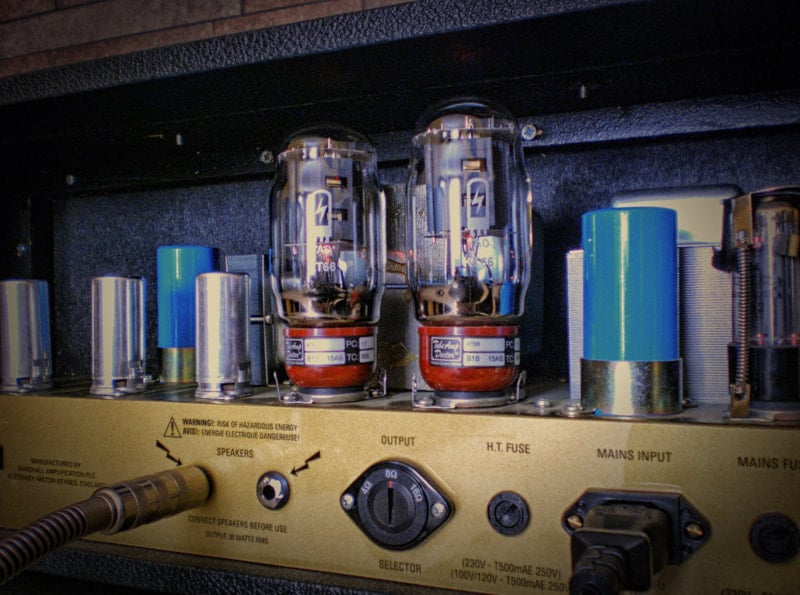 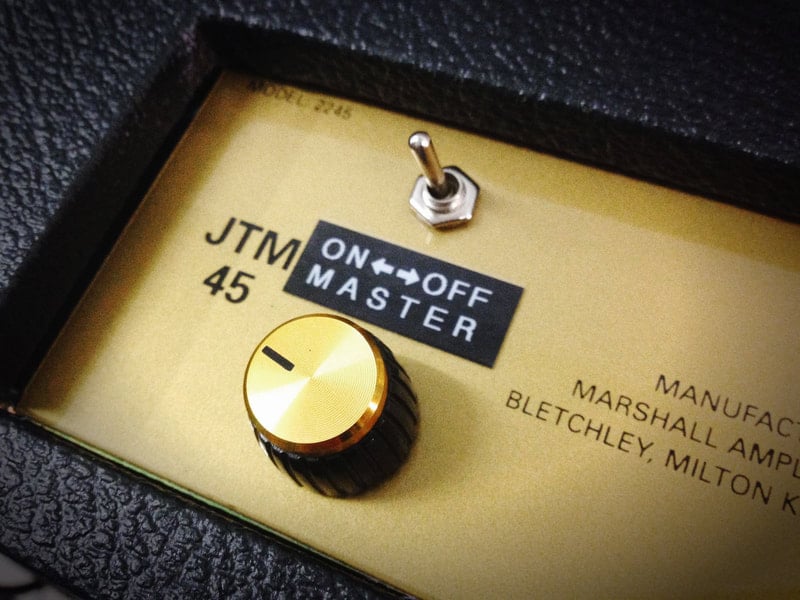 I use this head in combination with a Marshall 1960AHW cabinet, its birch-ply chassis is covered with black tolex and the ‘salt 'n' pepper’ grill cloth stands out on its front panel.  The four Celestion G12H 30 loudspeakers, from the Heritage Series made in England, combine very well with the JTM45, especially on the clean tones.  If you are looking for the sound of Greenbacks these are the right speakers.  However, I had to opt for a pair of Scumback M75 speakers to reduce the number of speakers and halve the volume.  Of course, to keep the speaker closed, I ‘plugged’ the remaining holes with two circular wooden panels, built and fitted by Costantino Amici.  The M75 loudspeakers seem to have been specially made for the JTM45, highlighting, without overdoing it, the mid frequencies as real greenbacks should do and enhancing the blues-rock character of the head.
The Scumback guitar speakers represent a gamble, that of recreating the sound of pre-Rola Celestion Greenbacks.  Its inventor and owner, Jim Seavall, a very approachable guy and generous with advice on which speaker best suits his instrumentation and tastes, studied more than 500 Pre-Rola speakers for some 12 years with the aim of capturing their secrets.
Initially, his speakers were assembled by Weber following, of course, his specs.  Since mid-2011, however, Scumback itself has been building its own speakers in a small factory in California.
Now Jim offers a wide choice of models, ranging from 25 to 100 watts, from M and H ceramic magnets and J magnets (which are somewhere in between the first two) to one also in alnico. There are the classic 55Hz or 75Hz and 16 or 8 ohm variants plus LD models featuring a large Dust Cup and PVC (Paper Voice Coil) models mimicking the very early Greenbacks.
The chassis of the M75 is in keeping with Greenback tradition, eight-bolt.  However, despite the stated objective, if the saying “Tone is in the cone” is true, the absence of pulsonic cone in the M75 (employed, however, according to Jim, in other loudspeakers), could distance them from the Pre-Rola sound.  But the M75 speakers are fitted with the famous Kurt Mueller cones, treated and processed by Scumback to achieve a rich, balanced midrange and diminished treble.  In addition, you can choose the F.B.I. (Factory Break In) option, a treatment that allows you to replicate about 50 hours of break-in at high volume. 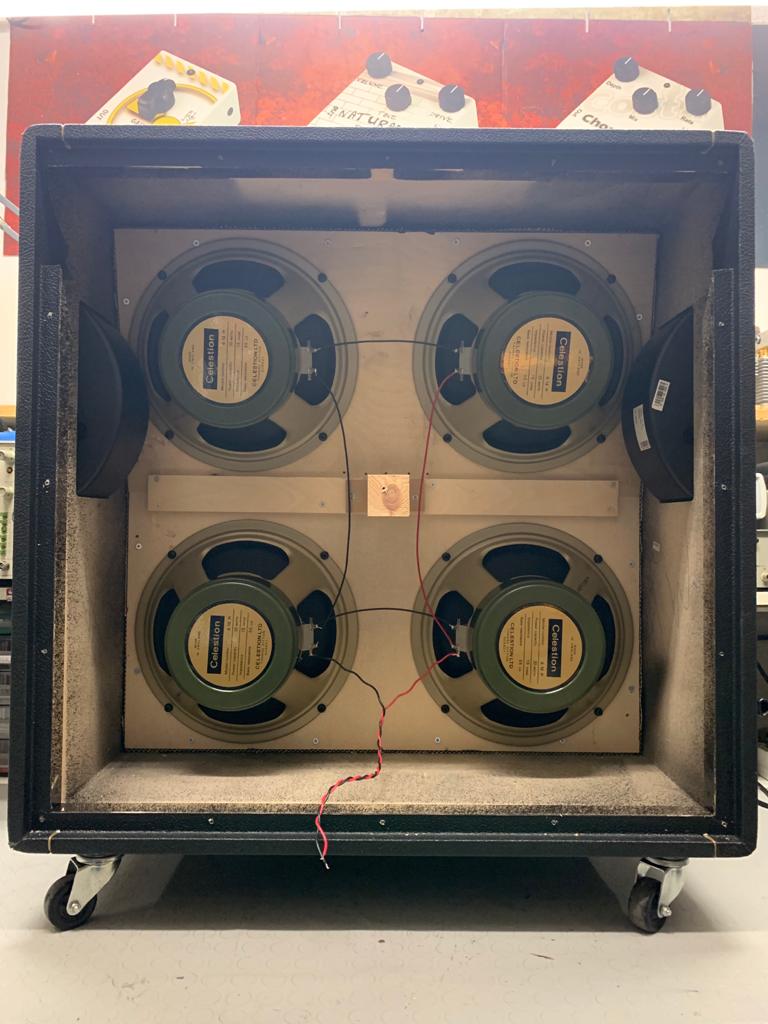 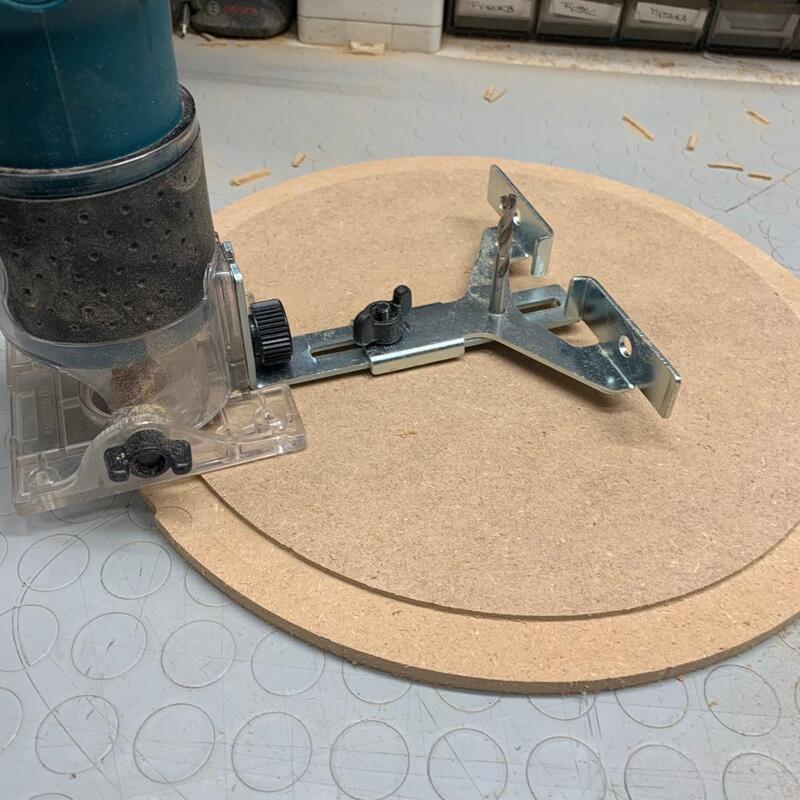 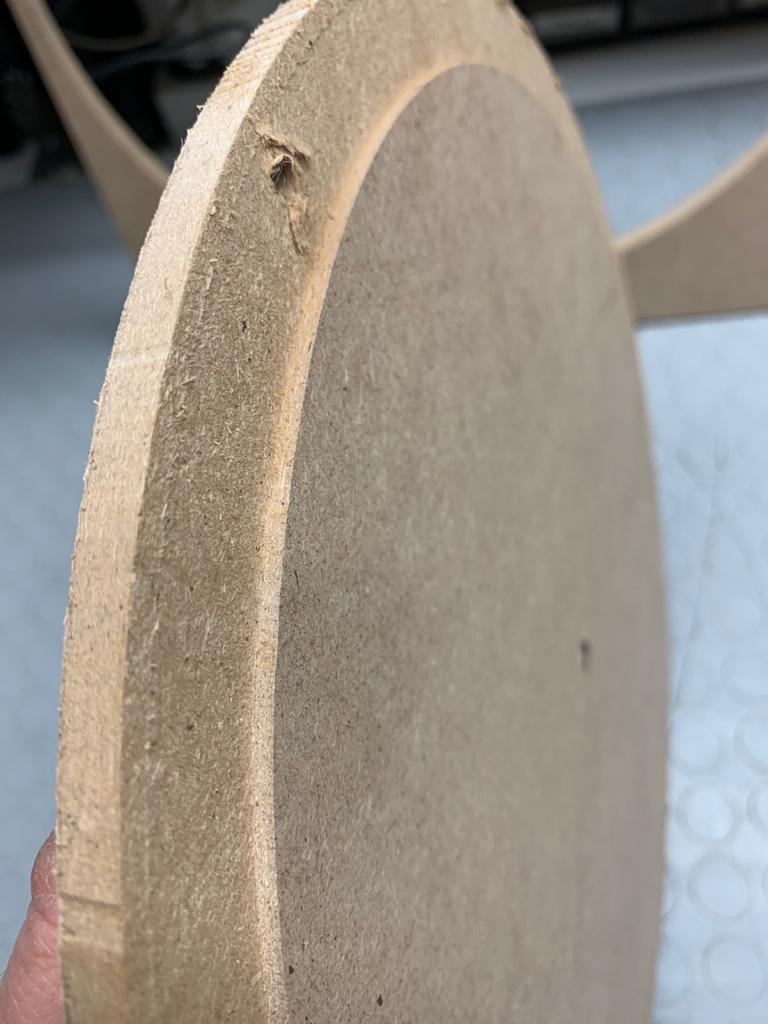 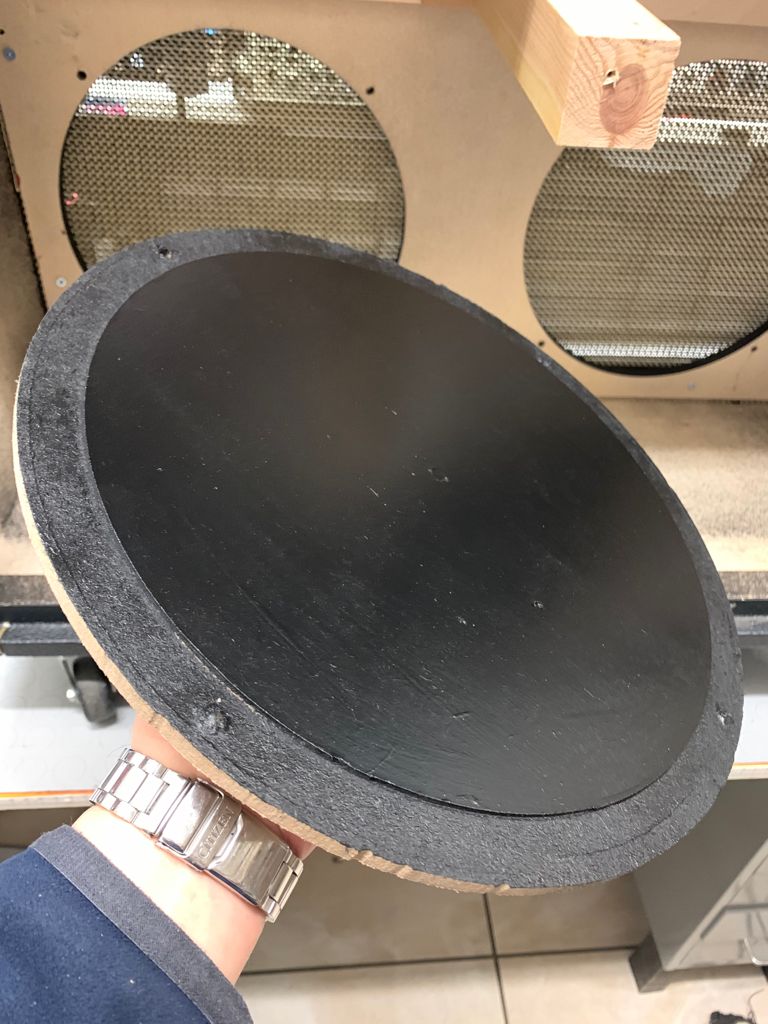 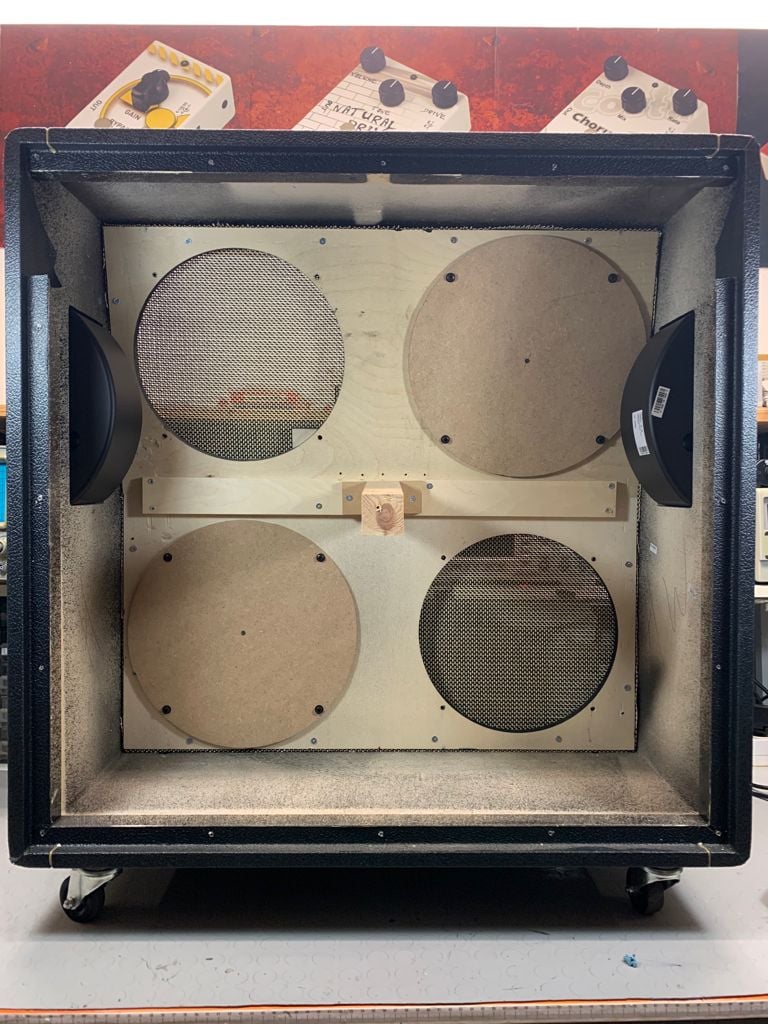 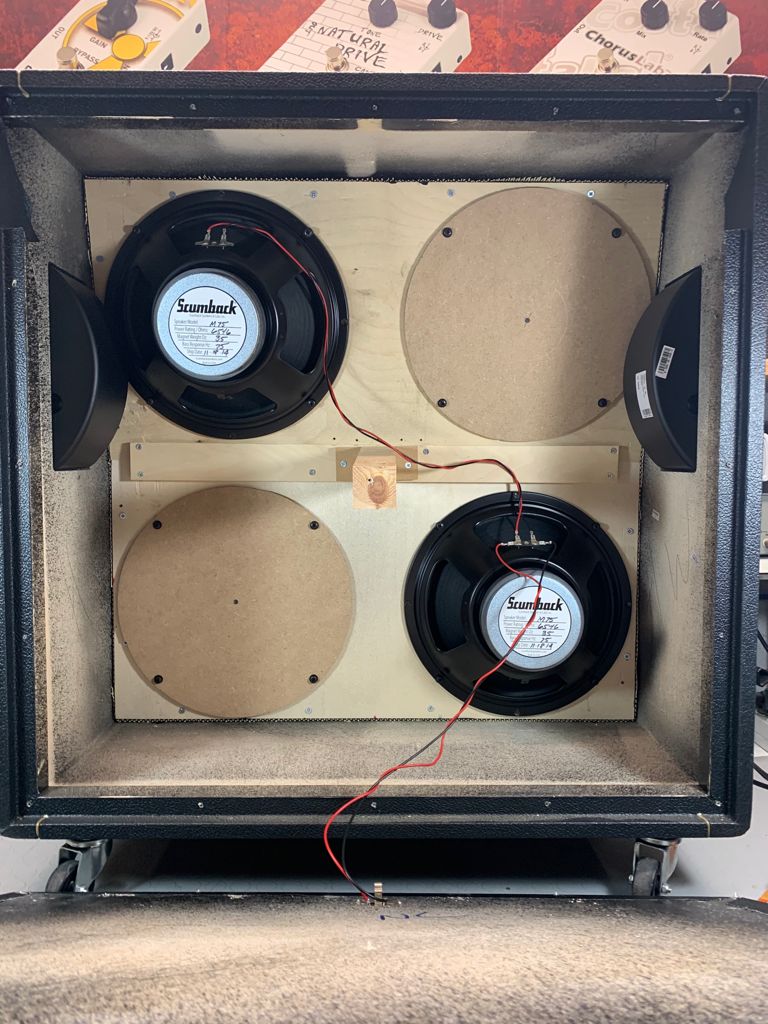 If you are interested in the history of the first Marshall amp, give a look the page:
The birth of Marshall JTM45 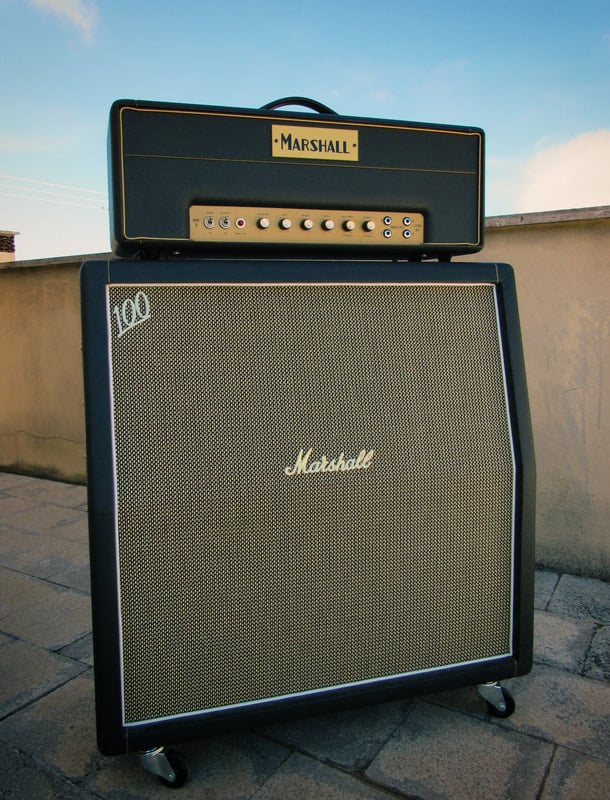 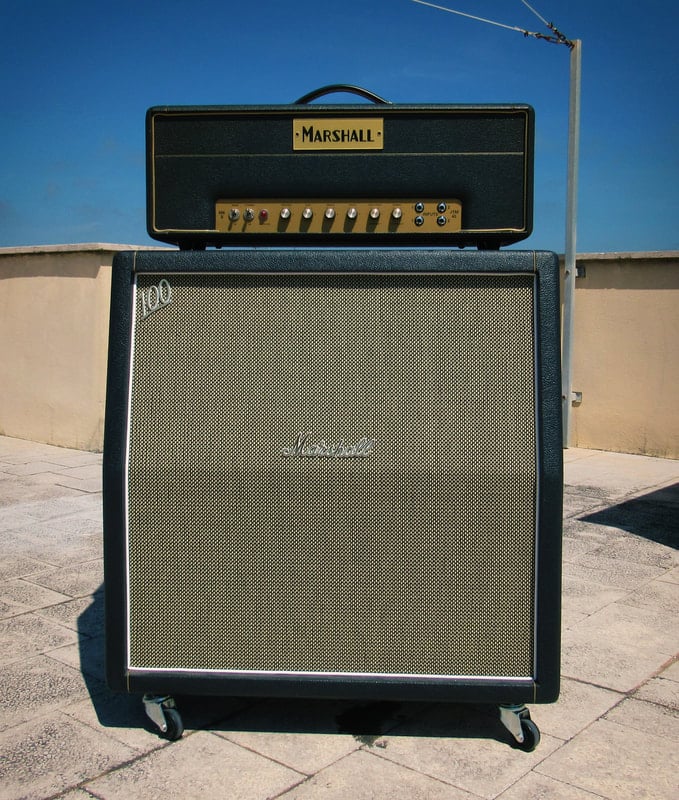 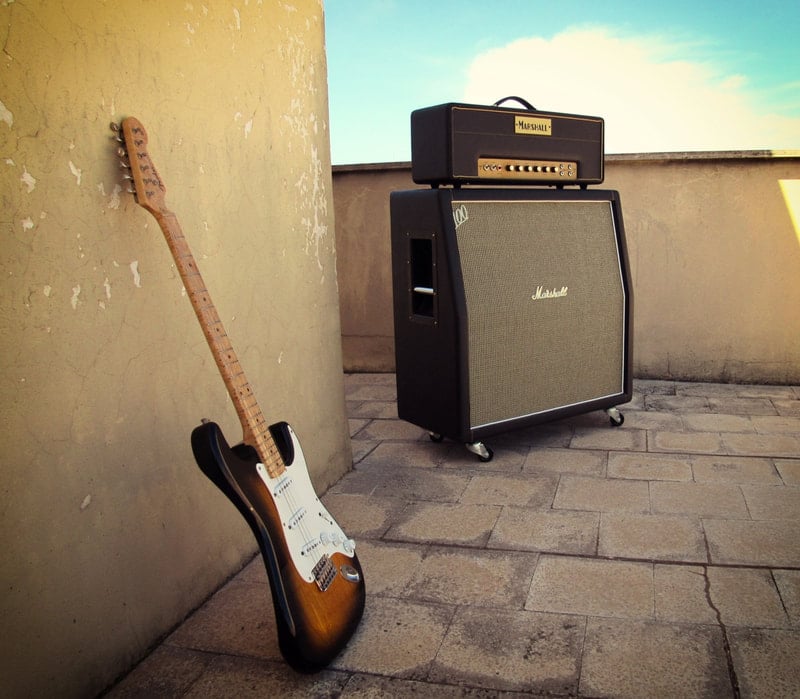