The first Marshall amp: the JTM45 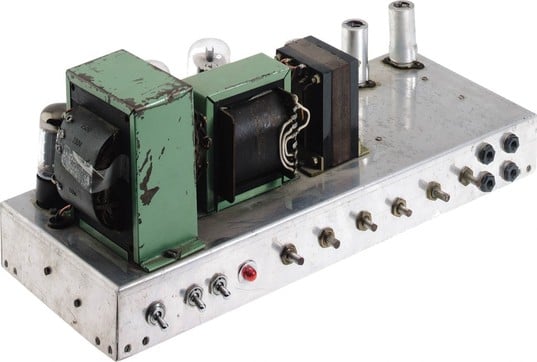 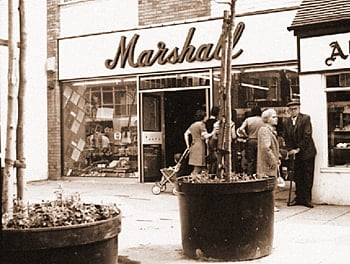 The first Jim Marshall's store, at 76 Uxbridge Road, Havwell, W7. Another shop was opened at 93 Uxbridge Road, Havwell, W7 (Photo courtesy of Marshall)
It was far off 1962 and in a small shop in Hanwell, a suburb on the outskirts of London, the history of rock was about to change, opening the way to “British crunch” and to the sharp, distorted sound of Jimi Hendrix’s Stratocaster.  However, what was unexpected was that this small shop at 76 Uxbridge Road, at least initially, wasn’t a guitar or amplifier store, but a drum store that the maestro, Jim Marshall decided to open on 7 July 1960: the Jim Marshall & Son.
Over half a century has gone by and the exact details about the creation of one of the most important blues and rock amplifiers are vague and subject to varying opinions.  According to the official version recounted by Jim and his son Terry Marshall, a lot of drum players brought guitarists and bass players from their groups to the shop, so Jim decided to expand the store with a guitar, bass and amplifiers section.  There were brands such as Fender, Gibson, Selmer, Watkins and Vox.  In 1961 Jim employed Terry’s friend, Mick Borer, who had been guitarist in the Cliff Bennet and the Rebel Rousers band and in 1962, Ken Bran as technician.  At that time musical instrument shops were dedicated to jazz or orchestral music, therefore Marshall's shop quickly became famous among teenagers and youngsters who were ever increasingly moving towards rock
It was Ken who suggested to Jim to employ his resources in building his own amplifier rather than importing the very expensive Fenders from the USA.  Jim listened carefully to the needs of the guitarists who went to the shop.  Encouraged by Terry, Mick and another friend of theirs, the young Pete Townshend, who all dreamed of a new amplifier with a different sound and higher power, he accepted Ken’s proposal.  However, despite his experience in repairing electronic equipment, Ken didn’t feel up to building the new amplifier on his own and asked his friend, the eighteen year old Dudley Craven to help him as an external consultant.  Dudley was a radio amateur who worked as an apprentice at EMI Electronics where he was known as a “Whiz kid” in the electronic field because of his excellence, despite his young age.   Together with Ken Bran, he had harboured the idea of building his own amplifier, for some time.  We have to partly give credit to Dudley for the Marshall’s having been truly innovative and having such a different sound to the Fenders. 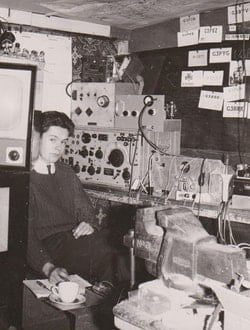 Offset "coffin badge" unit
Later, with the shift of production to a more spacious room at 97 Uxbridge Road, both the metal plate bearing the logo, and the control panel, were placed at the center of the front of the amplifier, which soon became two-tone, a blond color at the bottom and black, thanks to a material called “Renexe”: the so-called “Sandwich Amp”.

JTM bass, sandwich, without JTM logo
The writing, JTM45, still hadn’t appeared but the first control panels with the initials “MK II” and “JTM45” had already been ordered.  With the introduction of these initials and the elimination of the polarity switch, the space between the four inputs increased, compared to that of the first models.
Towards the end of '63 even the two-tone livery was abandoned in favor of the classic all-black Marshall front.
The logo also underwent major changes: first, a silver Plexiglas rectangle with red lettering, then black lettering on a gold rectangle.  These “block logos” were abandoned in '65 with the appearance of the familiar Marshall “script logo” still in use today.  At the same time the square, red LED took the place of the circular amber one.
Until ‘64 the control panel was in traffolyte or aluminum, silk-screened or engraved, and later it was produced in plexiglas, first white, then in the better known golden plexiglas, the famous “plexi panel”.  So, until '64 Marshall amplifiers were in the pre-plexi era, in which the control panel was traffolyte or aluminum.  In '65 the so-called plexi era began, which lasted until mid '69 when the metal paneled era came into being.

Plexi paneled JTM45, block logo
The front panel knobs also varied a lot: the first type was the Radiogram-style, black, with a small coppery circumference at the top.  Then there was the angled, black V-top.  The Silverface black pointer is often found on JTM45s with the block logo, and finally there was the Classic Marshall knob with the script logo amps.​
​Antonio Calvosa​