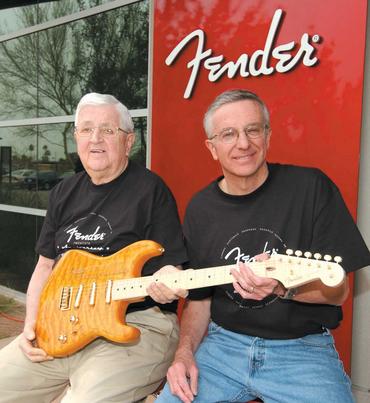 Old Fender's sales director, Don Randall, the man who gave the name to Stratocaster, died on December 23 of that year.
​
The IPO was withdrawn five months later after potential investors expressed concerns over the company’s debt load and a poor outlook for the future of musical instruments, as Larry Thomas said in a statement: “Current market conditions and concerns about economic conditions in Europe do not support completing an initial public offering at what we believe to be an appropriate valuation at this time.”
​As of July 10, 2012, the majority shareholders of Fender were the private equity firm of Weston Presidio (43%), Japanese music distributors Yamano Music (14%) and Kanda Shokai (13%), and the longtime investor Servco Pacific (5%).
​

In the fall of 2012, Servco – with TPG Growth as an equal-stakes partner – purchased Weston Presidio’s shares in Fender, and with that, a co-ownership stake in the brand.
In the same year, Fender moved its direction to Scottsdale Perimeter Centre and in 2014 sold the historic Guild acoustic guitar brand to the Cordoba Music Group.
In May 2014 Fender CEO Larry Thomas, 64, retired from FMIC.  “I am extremely proud of the success we have achieved in my time at Fender,” said Thomas.  “We did a lot in just a few years and I leave feeling like our table is set for the company’s future direction.  This has truly been a wonderful life experience. FMIC is a wonderful company and Fender is a great brand, and I am very thankful to have played a part in the company’s history.”
Scott Gilbertson, Fender interim chief operating officer since October 2013, assumed the role of interim CEO while the company searched for Thomas' successor. 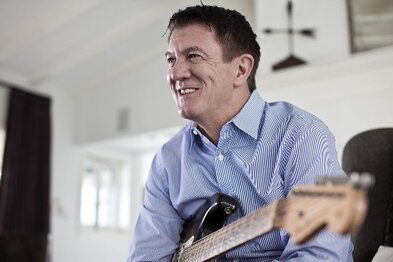 Andy Mooney
In 2015 Andy Mooney, Scottish by birth, became the new CEO in place of Gilbertson.  Mooney joins FMIC from Quicksilver, Inc. and brings significant experience growing global brands such as Disney Consumer Products (DCP) and Nike.  Mooney has been a player, studying classical guitar in grade school, and collected Fender guitars and amps for more than 40 years.  Mark Fukunaga, chairman and CEO of Servco Pacific and co-chair of the FMIC board of directors declared: “Andy has proven success in connecting consumers to brands.  His personal passion for Fender guitars and the company's long and storied history makes him a great fit for our culture.  We are tremendously excited to have an executive of Andy's caliber at the helm of Fender and we look forward to great success in the future under his leadership.”
​

With a press release in January 2020, Fender announced that longtime investor Servco will be securing a majority stake in a purchase agreement with TPG Growth and that the acquisition will take place in February.  Andy Mooney noted the milestones Fender had reached under the joint ownership, saying: “We thank TPG Growth for their contribution on multiple levels, both strategic and tactical, and for their support in expanding into digital products and services.”  Mooney also made it clear that the change in ownership wouldn’t affect the makeup of Fender’s current management: “On an operational level, all will remain the same.  Fender will continue with the same exceptional management team who all have been instrumental in our recent growth.  We look forward to extending FMIC’s long term relationship with Servco who share our core mission to support artists and players at every stage in their musical journey.”
The COVID19 pandemic, which started in 2020, led many industries to shut down production.  It was at first seen as a potential death knell into what was already a declining guitar market. Instead, this gave Fender's sales a surprisingly significant bump.  The result is that Fender has sold more guitars in 2020 than any other year in its history.
​Antonio Calvosa