STRATOCASTER IN THE NEW MILLENNIUM 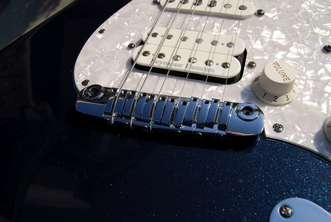 Tech Tonic bridge
In 2002 Highway One was born, the cheapest ever Stratocaster completely made in US (excluding the hybrids of the 90s), of which two series were produced.  In 2010 the new American Special Stratocaster, which cost just 100 dollars more than the Highway, joined this.  Only a few people remember that American Special Series was born as a series which at the beginning included guitars outside the classical schemes, as Stratocaster with Floyd Rose or Strat-O-Sonic, equipped with the Fender Tech-Tonic Stop Tail bridge, or 2001-2002 '68 Reverse Stratocaster Special, which replaced Voodoo Stratocaster in Jimi Hendrix’s tribute guitars.
Even Artist Series were in part modified: in the summer of 2001 Noiseless pickups took the place of Lace Sensor on Clapton and Beck (in the latter the neck was also streamlined considerably), and new guitars joined the series, including Mark Knopfler, Eric Johnson and John Mayer signature Stratocasters.  Above all, Custom Shop inaugurated Stratocaster Replicas era.  Who wouldn't want to take up the instrument of a Guitar hero?  The dream of every guitarist pushed Fender Master Builder to realize limited editions of identical copies of Clapton’s Blackie or Brownie (in 2006 and 2013 respectively), Stevie Ray Vaughan’s Number One (2004), Malmsteen’s Play Loud (2008), just to name a few.
In 2010, Fender Stratocaster, Squier and Custom Shop models excluded, Stratocasters were organized into twelve series (about forty models): the made in US American Deluxe, American Vintage, American Special, American Standard, Artist, Highway One, Vintage Hot Rod, and the Mexican Classic, Classic Player, Deluxe, Road Worn, Standard.
In conclusion, the trend started in the '90s characterized by a rapid expansion of the series number and of the different Stratocasters ramped up in the new millennium.  Now there were many models which could be purchased and they were very different, both by type and by economic range.  Moreover, the Custom Shop, which was born to produce limited editions only and in the '90s saw the birth of some series, turned itself more and more into a factory in the factory, with many series and many more models. ​​ 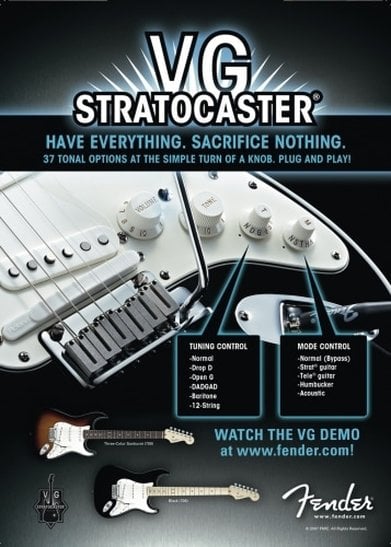 American VG Stratocaster knobs
This guitar deserves special consideration.  At the beginning of the new millennium there was a strong tendency to bring the digital into the world of guitars.  In 2003 Line 6 presented Variax, a guitar that allowed multiple sounds to be obtained, including many imitations of Fender. It was therefore inevitable that Fender would also enter this new market sector.  In that same period, former guitarist Jeff Baxter went to Ikutaro Kakehashi, the head of Roland, a Japanese company at the forefront of digital music, to propose a Fender/Roland modeling guitar, which was actually presented in 2007 and named American VG Stratocaster.  This guitar, which remained in the Fender catalog until 2009, could get sounds never achieved before thanks to Roland technology.  To be honest already in the '90s some Fender/Roland guitars had appeared: The 1995 American Standard Roland GR-Ready and the 1998 Mexican Standard Roland Ready Stratocaster.  But they both needed an external synth.  The new American VG Stratocaster, on the othe hand, was equipped with all the necessary electronics.  It was sufficient to plug it into a normal amplifier to get, in addition to the classic Stratocaster sound, all the others that the Roland synth could produce.  The new sounds were controlled by two extra knobs and by the pickup added to the Roland GK bridge.  The Mode Control knob allowed to choose between five types of sound: the letter “N” stood for the normal Stratocaster sound, “S” for modeled Stratocaster, “T” for modeled Telecaster, “H” for modeled Humbucker and “A” for modeled Acoustic.  The second extra knob provided a choice between standard tuning and four other, different tunings, plus the simulation of a twelve string guitar.
Antonio Calvosa