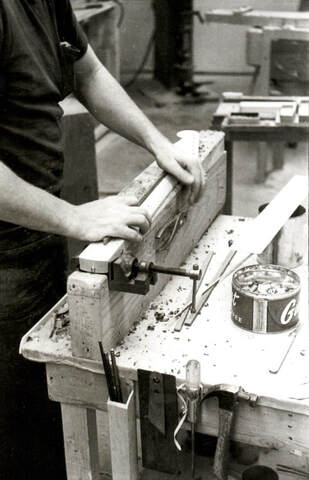 A Fender employee fitting the truss rod in a strat maple neck. Photo from “Fender, The sound heard 'round the world” by Richard R. Smith
Stratocasters made between 1954 and mid-1959 featured a one-piece hard rock fretted maple neck, without any separate fingerboard.  Leo Fender never intentionally used fancy figured woods, because his instruments were designed for working musicians, although it is possible to find stunning figured maple necks on ‘50s Stratocaster guitars, especially in 1954 or 1956.  Actually, Freddie Tavares remembers that Leo Fender was not keen on such ‘extras’: “Leo always discouraged the beautiful wood in the neck because it's so rare.  If we were a custom instruments′ maker, fine, we could get enough of it, but not to make plenty of guitars.  So, Leo was very much against it, because it's not a good thing to do to have the ordinary run of the mill products to look like superlative instruments now and then for the same price.”
During the ‘50s, necks finishing included three coats: sealer, primer and glossy nitrocellulose clear coat.  By the late ‘60s, Fender started to use a polyester finish, which was much more durable and resistant to scratches and easier to work with.
Bone nuts were installed in the unfinished necks and slotted before the lacquering process.  Hence, they usually featured lacquer traces on the top.
The truss rod was inserted in the neck by making a longitudinal incision on the back, subsequently filled with a strip of walnut.  The characteristic look that this gave the neck of Fender guitars earned it the nickname skunk stripe.  Maple necks of the '50s could also be recognized by the small tear-shaped plug on the nut, to fill the anchoring point of the rod, nicknamed walnut plug.  Its shape and position on the headstock might not be perfectly the same for all Stratocasters, because of the different templates used to route the neck.  Some Stratocasters had the walnut plug painted; the reason was not clear, but it was probably due to mask a not correct or anomalous inserting of the truss rod.
After July 1962, a curved rosewood fretboard, with a convex base, replaced the slab board.  At first, the rosewood cap remained fairly thick, but in 1963 it gradually turned into a thinner veneer which was kept this way until mid-1983.  Veneer fretboards (a.k.a. round-lam) could be quickly identifiable from the headstock by their dished line toward the nut.

Slab vs Round-Lam (1959 and 1964 Stratocasters, Cesco's Corner)
​It is common opinion that Fender switched to the round-lam fingerboard with the aim of saving the rosewood, even if, according to Dan Smith, Leo decided to use the veneer fretboard only because of the different expansion coefficient of rosewood and maple.  In fact, the two woods contract differently according to the different humidity conditions and, as this difference could determine some problems in the way the slots of the Stratocaster​ frets were cut, Fender decided to modify the fretboard type: “On the most of slab boards, slots are cut straight across, parallel to the flat back.  They go almost all the way through, so instead of a solid hunk of wood, the effect is to have a bunch of little blocks.  When the weather changes, and the rosewood and maple expand or contract at different rates, they can twist or warp.  It's not a big problem with deep slots, because the fingerboard is more flexible and there's some ‘give.’  But Leo used a swing-arm fret slot cutter, and the slots were curved on top and not as deep, so he had this thick beam of rosewood running down the neck, and it could twist or bend with shifts in the weather; it didn't ‘give.’  He didn't want to change the way he cut slots, so he went with a thinner, curved piece of rosewood.”
In 1965, the Brazilian government, to favor local businesses, imposed an embargo on the export of Brazilian rosewood, which could no longer be exported as it was, but already partially cut into blocks.  Fender, which was not satisfied with the quality of the blocks of wood from Brazil, therefore stopped importing this wood and soon ran out of supplies, preferring the Indian rosewood. The transition was not sharp but gradual, and it is possible to find Brazilian rosewood fretboard on Stratocasters dated October ’65.  Finally, the Brazilian rosewood was included in CITES protected species in the summer of 1992.
In 1965 optional maple fretboard has returned available, on request, as an alternative to rosewood one.  New maple boards, called maple caps, were glued on the maple neck, and therefore were different from 1-piece maple necks from the '50s.  A glued-on maple fretboard from the '60s is easily distinguished from a one-piece maple neck of the '50s by the absence of both the walnut plug above the nut and the skunk stripe on the back of the neck.  Furthermore, the original 1-piece maple neck from the '50s was sealed with clear nitrocellulose lacquer - often yellowed with age - whilst those made after 1969 were finished with polyester.
At the beginning of 1970 the original one-piece fretted maple neck was reinstated as an option in lieu of the maple cap board.  By then, in order to optimize production, Fender decided to insert the truss rod from the rear of the rosewood-capped necks, too.  This is why Stratocasters made since the end of 1971 featured the skunk stripe.
Since mid-1983, with the introduction of the BiFlex truss rod, veneer rosewood fretboard was discontinued and replaced by a new slab board on both the Stratocaster Standard and Elite.

From '50s until late '70s, Fender used a pin router and templates to cut guitars neck edges.  Routing templates had locating pins to secure them onto the underside of the blanks.  Then, when the template was removed, two small holes always located on the back of the headstock, under the G and D tuning machines, and underneath the neck's heel were left.​

'50s maple necks were inlaid with 0.25" wide black circular fret-markers, known as black dots.  They showed a ca. 3/16" wide spacing at the 12th fret, where they were neatly crossed by the A and B strings​.
When Fender switched to rosewood fretboard in 1959, new matt white dots, known today with the term paper dots or clay dots, were used, in order to make fret-markers more visible.  They often tended to turn yellow and become light brown over time.
Being composed by a fibrous material mainly made up of zinc hydrochloride and cellulose​, and not by a pasta called ‘ivorina’, as sometimes erroneously reported, they were inserted in the fretboard as discs only 0.0625”​ thick, and so, during refrets, they could even jump off.  It appears that some of the very first fret-markers used on rosewood boards were composed by a flax fiber.
​
Clay dots initially kept the same 12th fret spacing as the black dots, but, after mid-1963, the 12th fret dots were moved closer to each other to a ca. 5/8" narrower spacing, whether on rosewood or maple-capped necks.  It is important to remember that a fixed distance between the two dots did not exist, but it could vary from a fretboard to another, even if only in an almost imperceptible way.
Fender used clay dots until November 1964, when they were gradually replaced with slightly bigger pearloid dots, which kept the narrow spacing at the 12th fret.
Pearloid dots were used on rosewood fretboards until mid-1983, when they were replaced by matt white fret-markers, often called whitish dots.
Obviously, maple boards available on request since the late '60s were inlaid with black dots, albeit with a narrow spacing at the 12th fret.
It's interesting to note that when Fender launched the Vintage Series in 1982, '62 Stratocaster rosewood fretboard sported whitish dots, not clay-style dots.  Moreover, they didn't reproduce even the wide spacing at the 12th fret, whilst the Japanese reissues fretboards featured the vintage-correct distance!
Side dots on the upper edge of the neck also changed over the years.  In the '60s, they were black on maple necks and whitish on rosewood-capped necks.  On the latter, the side dots generally sit astride board and neck, with the exception of the Stratocasters made since early 1970, which featured black side dots inlaid into the maple neck, apart from the fretboard.

Between 1965 and 1967, a bound fretboard was available at an additional charge, although those actually made were very few.
At the beginning of 1960 also some fretboards in cocobolo and necks in American walnut (hickory) were produced.