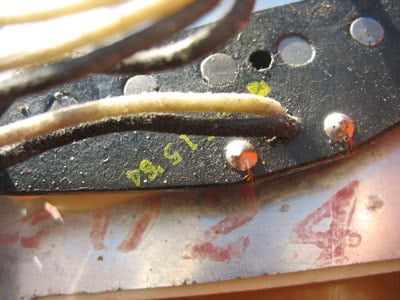 Magnetic poles were made of ​AlNiCo, an iron alloy composed also of Aluminum, Nickel and Cobalt hence the acronym al-ni-co.  It could also include copper, titanium or niobium.
According to their chemical composition and magnetic properties, alnico magnets are traditionally classified using numbers from II to IX.  It's important to bear in mind that Alnico V magnets used by Leo Fender in the '50s and '60s were different from Alnico V magnets used today, because their primary constituents and impurities proportions were different from that of the most recently produced magnets.
The length of the pole pieces ranked as follows: B, E (treble), G, E (bass), A, D, from the shortest to the tallest.  Since 1956, the G magnet became the tallest.  The diameter of the magnet slugs was inconsistent, ranging from .185” to .197”.
Since the end of 1974, the staggered pole pieces were replaced by slightly smaller ​flat pole pieces, as a consequence of an increasing use of a smaller string set.  Starting in the early '70s, the top edges of the magnets were no longer beveled.
The magnetic polarity of can either be south or north. The majority of the early Stratocaster pickups had a north polarity.  Stratocaster pickups made since 1959 became south as standard magnetic polarity, although pickups with north polarity were used until 1962.

While keeping the same copper wire gauge (i.e. AWG42), Fender modified the winding method over the years.
Pickups were not wound to an exacting number of turns, but to deliver a certain output on a volt-meter with a 20% tolerance, which explains why there are variations in the measurements of vintage units.
Until 1964 Fender pickups were wound with hand-guiding machines, which turned the bobbin, while a worker would guide the wire onto the turning bobbin.  The readings for the number of turns came through a belt-driven worm gear counter, which was a fairly inconsistent piece of machinery.
The exact number of turns and the tension in winding, which could stretch wire and affect its diameter and length, could vary from pickup to pickup and influenced the tone.  It ranged between ca. 8000 and 8700 windings, reason why 8350 is often considered the standard number of windings of an ‘old’ Stratocaster pickup.
In 1965, with the CBS takeover, Fender gradually replaced the old-style hand-guiding machines with new auto-winders and conversion ratios brought about some confusion.  Ratios were changed back and forth, but at the end Stratocaster pickups featured an average 7600 turns.
Newer coils were more consistent with neatly parallel winding, but as rule they were not wrapped as tightly as the older ones, because wrapping tight on an automatic winder tended to break wire.  Therefore, older pickups usually had a slightly higher output, whilst newer ones had a little more top frequency response.
After 1981, Fender switched back to old resistance value (from ca. 5,700 to 6,000 Ohms).

Originally, the top and bottom plates of the Stratocaster pickups were made of forbon, a black vulcanized fiber, hence the name black bottom pickups.
Their windings had an intense copper color due to the formvar (poly vinyl formal varnish) insulation, a polyvinyl resin.
After a few winds, the wires were dipped in clear lacquer to keep them neat and to insulate the magnets from the coil.  In this way a short was prevented if the coating on the winds was thin or started to corrode.
Then, after the coil was wound, the pickup was immersed in hot paraffin wax to saturate the coil, a process known as wax potting, with the aim of eliminating a possible source of microphonic noises.
Surgical rubber tubing cut into small pieces was used as springs to adjust the height of black bottom pickups. Unfortunately, this rubber hardens over time, so sometimes it was necessary to replace it.
Since March 1964, Fender started to gradually replace the black bottom pickups with the new grey bottom units, characterized by a grey bottom plate, at first light grey and slightly darker after 1968.  Grey bottom units finally replaced the black bottom pickups at the end of 1967. However, in the '70s, a few black bottom single coil pickups were used by Fender, because, in order to run out of stock, undated pickups with black fiber bottom plates were made.
The windings of the new pickups were burgundy color due to the new insulating coating, plain enamel.
In the late '60s and into the '70s, Fender started to stop dipping pickups in wax as it shortened the coil, and the pickups howled and squealed in the case of loose windings. For a long time, it was not possible to understand the nature of this problem, which was solved only in late 1981, when the Vintage Reissue project demanded wax potted pickups like the originals, thanks to Dan Smith.
Cone-shaped springs are used to adjust the height of grey bottom pickups.
In the late '70s Fender gradually began to prefer polysol insulating coating, and gradually, from 1980, they started to use a 1-piece molded black plastic bobbin which protected the pole pieces so the wire never touched the magnets.

In early 1964 Fender started to date the bottom plate of most of its pickup bobbins and the date of production could be found on at least one of the three pickups.  During the '60s and '70s, three different types of markings were thus successively applied:
​​
The pickups with the 1-piece black plastic bobbin used from 1980 by Fender were no longer dated, but they only featured the code “016730” on the bottom plate, which was only the Fender part number for the molded plastic bobbin and it was used on many pickups Fender have made over the years.

The Stratocaster Elite was equipped with weaker Alnico II pickups to compensate its active circuit. In addition, a dummy coil was inserted between the bridge and the mid pickup to obtain a hum reducing.
​The Lace Sensor pickups used on the Plus Series were completely different pickups and deserve a separate chapter.​ 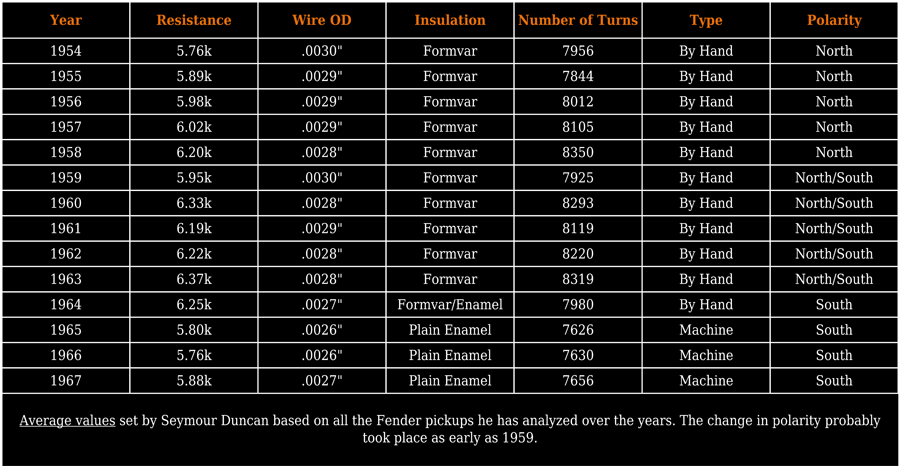