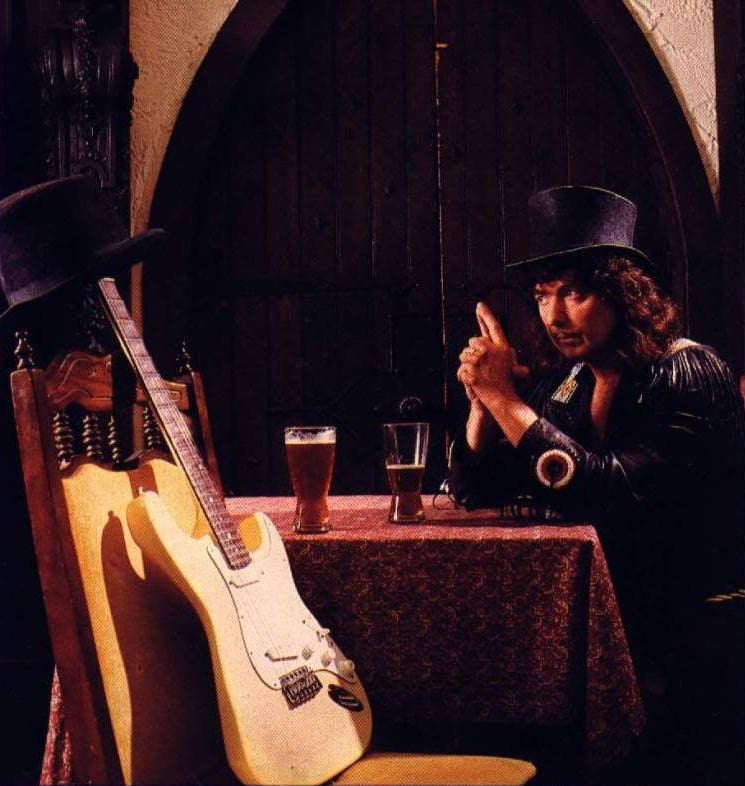 “At first I couldn't get used to the Strat after the Gibson.  The necks are quite different.  But now I can't get used to the Gibson again.  A Stratocaster is harder to play than a Gibson, too.  I don't know why.  I think it's because you can't race across a Strat's fingerboard so fast”.  Ritchie had a lot of appreciation for the Stratocaster tremolo: “I liked the way Hendrix used his tremelo, though I don't think I use it the same way.  A lot of guitarists think that a tremelo arm is for someone who can't play a hand vibrato.  But the tremelo arm gives a different vibrato all together.  It affects whole chords.  I can do the old hand vibrato just fine, but I like attacking the strings and getting all those sounds.  You can get a lot of aggression out with a tremelo arm.  I've got a Bigsby on my Gibson, and it's a waste, because it's got too much leeway.  You have to pull it back a half-an- inch before it does a thing.  But the vibrato on the Strat reacts immediately.  As soon as you pull on it, the strings start going back.”

Ritchie Blackmore Stratocaster made in Japan

The Blackmore signature process started after a meeting between Ritchie, Clif ‘Cooky’ (his guitar tech between 1981 and 1988) and John Hill, Fender’s Artist Relations and Brand Directors for Europe, in guitarist's dressing room at Wembley Arena.  The meeting was arranged by Mick Ralphs, English guitarist and songwriter, who was a founding member of rock bands Mott the Hoople and Bad Company, as Ritchie liked one of the Squier vintage reissues he saw when Bad Company were supporting Purple in 1987.
It is interesting to note that another Stratocaster with scalloped fretboards but without Blackmore’s signature on the headstock was made in Japan between 1994 and 1996 for the domestic market only, the model ST72-85SC.  This guitar was usually dubbed ​Blackmore pre-signature Stratocaster and featured the new ST-HR7 pickups, designed to visually echo Duncan Quarter Pounds.

RITCHIE BLACKMORE STRATOCASTER MADE IN Mexico

Just over ten years later, the Ensenada factory also started producing the Deep Purple guitarist’s signature, the ​Ritchie Blackmore Stratocaster (made in Mexico), unveiled in 2009.  It, too, was a guitar based on the Stratocasters of the '70s, with big headstock, bullet truss rod and 3-bolt neck plate with micro tilt, but it was slightly different from the MIJ signature.  In fact it featured an alder body, the profile was U-shaped (not the special oval shape like the Japanese one) and the six screw bridge had vintage saddles instead of the CBS style used for the made in Japan.  The Mexican model also had a dummy cover at the central position, while the other two pickups were Seymour Duncan Quarter Pound Flat SSL-4.  The twenty-one fret fretboard was graduated scalloped, differering from that of the Malmsteen whose frets were dug symmetrically.  In fact, Blackmore frets had an asymmetrical and gradual scalloping, that accentuated going down towards the treble E string and approaching the end of the fret.
But these were not the only Blackmore strats made by Fender.

The Custom Shop ​Ritchie Blackmore Signature Stratocaster was a very particular guitar: besides being a set neck strat, it featured only two pickups, at the bridge and at the neck, both Gold Lace Sensors.  The guitar had appeared already in 1998, but was officially in production between 1999 and 2004.  It featured light premium ash body, a custom oval shape neck with a twenty-two fret custom scalloped fretboard, a bullet truss rod, the Fender/Schaller Deluxe Cast/Sealed Locking Tuning Machines, a 2-point tremolo with block saddles and the guitarist’s signature on the headstock.
The three-way selector the option of using the neck and bridge pickups together.  On demand, the Ritchie Blackmore Signature Roland Ready Stratocaster version was available, equipped with a Special Design Roland GK-2A additional pickup which turned the guitar into a synth controller.
The Set Neck ST72-175RB mustn’t be forgotten too.  Made in Japan only for the domestic market, it was identical to the version of the American Custom Shop, but stood out for the presence of a vintage style, not 2-pivot, bridge, and for the flatter fretboard.
On the right, the Japanese set-neck model (Courtesy of vintageandrare)
In 2013 Custom Shop unveiled the limited edition​ Ritchie Blackmore 1969 Light Relic Stratocaster, replica of the historical black Fender with which the Deep Purple guitarist played in the early '70s and recorded the album Machine Head and the riff of Smoke on the water.
​The guitar featured a light relic nitro finished two piece alder body, a U shaped maple neck and 7.5" fretboard equipped with twenty-one medium jumbo frets.  The Custom 1969 pickups, hand wound by Abigail Ybarra, were controlled by a three-way switch.  The guitar was equipped with Fender/Schaller "F" Keys tuning machines, a 4-bolt neck plate with the serial number and the “F” of Fender engraved and featured a vintage style bridge with ¼" custom tipless tremolo arm, just as the Deep Purple guitarist liked.  On the back of the headstock the Custom Shop logo with “Tribute Series” decal stood out.
Antonio Calvosa