Stratocaster Serial numbers: Made in Japan 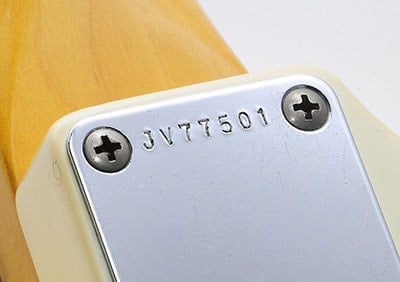 The serial number of the Japanese Stratocasters made until 2017 was often placed on the back of the neck, just above the neck plate, although some models had the serial number incorporated into the headstock decal or on the neck plate.
All serial numbers used before 2011 had a prefix composed by one or two letters always followed by a “0”, with the exceptions of those that had “JV”, “SQ” and “E” prefix.
It’s important to bear in mind that “JV” is only the prefix of a serial number, not a model, and thus it indicates only the period of the issue.  Therefore, not all JV guitars are the same and JV is not always synonymous with quality.  Some JV Stratocasters were high-level guitars, others were entry-level.
A common mistake is dating a Japanese Stratocaster with “E” serial number from 1984-1987, as often reported.  In fact, as suggested by Bill Alston, they were manufactured until 1989.  Probably the 1984-1987 date might have come from one wrong source - most likely the "How can I find out when my Japanese-made instrument was manufactured?" page of the Fender website - and everyone since has copied it.
Until 1997, the serial number of these guitars was paired with the "Made in Japan" decal (period called MIJ Era).  Between 1995 and 1997 Fender gradually shifted to the "Crafted in Japan" decal, paving the way for the CIJ Era.
However, this change was not due to the shift of production from a factory to another, as often reported.  In fact, in the second half of the 1990s, Sam Sekihara, Managing Director of Fender Japan, approached Fujigen with the idea to change the “Made in Japan” decal with “Crafted in Japan” with the aim of giving a little boost to the image and setting their instruments apart from other Japanese instruments.  At that time, Fender was increasing their orders to Fujigen and delays were starting to happen.  The Fujigen Vice President, Mr. Ace, suggested bringing Dyna Gakki ​ into the picture.  This happened virtually at the same time as the Fender Japan idea to change the Made in Japan decal.  Not by plan or design, just by chance.  For a while both Fujigen, Dyna and Tokai manufactured the very first “Crafted in Japan” Fender guitars together.
Strangely, the serial number used on the “Standard” Stratocasters made since 1997 and intended for the Japanese market only, such as the ST-38, all characterized by a silverish CBS-style logo, had all a “MADE IN JAPAN” decal on the headstock, although they were built during the “Crafted in Japan” period! 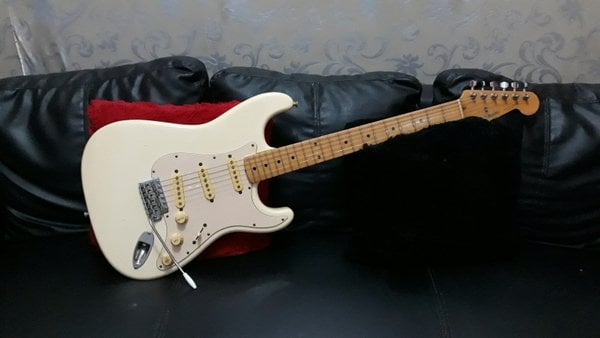 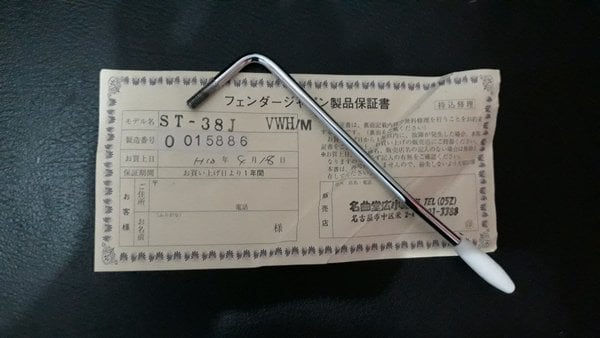 The ST38J was a Standard Stratocaster intended for the Japanese domestic market.  Despite this guitar was manufactured only in 1998, during the "Crafted in Japan" era, it sported the "Made in Japan" decal on the headstock!  Indeed, the "O" prefix in the "Crafted in Japan" era meant 1997-2000.
In 2011, a new serialization scheme, meant to indicate the year of the issue, was devised.  New-style 10-digit code was introduced, with a basic “JD” prefix (which probably stood for “Japan Dyna”), followed by two numbers indicating the year and 5 digits in numerals for the identification of the guitar.  In 2017, the “JD” serial number was moved from the back of the neck to the back of the headstock.
Over the years, differerent fonts were used for the "Made in Japan" and "Crafted in Japan" decals.  A few of them are pretty rare, like the "Made in Japan" handmade font.  The serial number with the "V" prefix and the "Crafted in Japan" decal is rare, too.
Starting in 2019, a new serialization scheme was adopted for some Superstrats, like the Boxer and HM reissues and the Aerodyne Special Stratocaster.  Therefore, two codes were used at the same time. ​ The new serial number had a prefix composed of 4 letters and a 7-digit number.  The first 3 letters were always “JFF”, followed by a letter that indicated the month of production, whilst the first 2 numbers indicated the year.
In 2022 Fender released the new JV Modified Series whose serial number had a “JV” prefix followed by 6 digits in numerals.  It can’t be confused with the serial number of the early ‘80s JV guitars that was composed of the “JV” prefix in a different font and followed by only 5 digits in numerals.
MIJ Serial Numbers
CIJ Serial Numbers* (*MIJ on Standard models)
MIJ Serial Numbers
And so on...