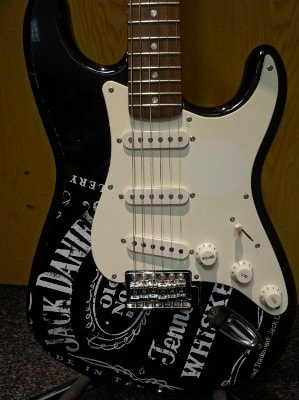 THE SQUIER ARTIST MODELS AND THE REGIONAL ARTIST PROGRAM

The Squier Artist Series was inaugurated in 2002 with the Squier Tom Delonge Stratocaster, tthat appeared on the catalog only one year after the birth of its Mexican Fender branded cousin, with which it should not be confused.  Like the one made in Mexico, this Squier had only a single volume knob with an humbucking pickup.
However, the Squier signatures were soon associated with a particular project: the Regional Artist Program.  The idea consisted in selling the signatures only locally, in the country in which the musician, sometimes unknown elsewhere, was very famous.  In this regard Richard McDonald recalled: “They started coming up with these artists and I started approving them.  We'd do international artist models that are meaningful for a particular market, and they'd be Squiers, so they are affordable for the customer.  It made total sense: local players to inspire and create a local sense of belonging.”
The O-Larn Stratocaster was the first of the Regional Artist Program Stratocasters and it had been sold only in Thailand since 2008. The Thai distributor of Fender, the Beh Ngiep Seng Musical Instruments, was persuaded that this was the right guitarist to invest in for such a project. The guitar was equipped with a Duncan Designed Hot Rails set and it had no tone controls. A second series, in production since 2013, had a vintage style pickup and still only the volume knob.
The 2009 Sham Kamikaze Stratocaster, sold only in Malaysia and dedicated to the local guitar hero, and the Simon Neil Stratocaster, of the same year, signature of the British band Biffy Clyro’s frontman, sold only in Europe and, based on the musician's Custom Shop, constituted the next step.
The Sham Kamikaze had a reverse headstock with Squier Gold Logo and “Sigma” symbol or the signature on the ball of the headstock.  The pickups were the Custom Vintage Style Reverse Staggered in Alnico III; the one at the bridge had an opposite angulation in Hendrix’s style.
The Simon Neil had the Biffy Clyro Band Logo on the headstock and mixed magnetic pole pickups: Alnico V on the bass strings and Alnico III on the treble ones.
The signature, equipped with two humbuckers and a single coil, was presented in the first months of 2011, after undergoing significant changes in the development phase.  Regarding this instrument, Noorani said:  “Most Indian guitar players have small hands: we're not as large as Caucasian people, we're smaller people.  Very often you'd pick up an American Standard and you find you're struggling a bit with the width of the fretboard.  I said we ought to go for a standard width but a very small shallow neck, because that would really help us wrap our fingers around.”

The Graphic Series was inaugurated in 2006 with the Stratocasters Obey Graphic Dissent and Obey Graphic Collage, both designed by Shepard Fairey, a street artist who had already collaborated with the Custom Shop. Fairey was thrilled to work for the Squier: “A lot of people who are learning the guitar might use a Squier. My feeling with my art, if I can, is to inspire people when they are young and optimistic.”
Fairey presented three drawings (there was also the Obey Graphic Propaganda destined to Telecatsers only) that would have been applied on the Indonesian Squier Stratocasters.  They were the first Squiers with "rustic and worn" hardware.
To tell the truth, Fairey's were not the first Squier "art" guitars: the ​Jack Daniel's (of which there are two versions) was made since 2002 and the​ Rolling Rock Stratocaster since 2003.
In addition to the Rolling Rock and the Graphic Series, the Heineken, ​Miller Genuine Draft, Miller Lite and 2005 Icehouse Stratocasters must be remembered.  These were not guitars intended for large-scale sales, but for the best retailers, to be displayed, sold or given away.
Antonio Calvosa
​