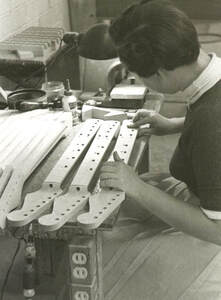 On the Stratocasters of the '50s with maple neck, black, circular and 0.25 inches wide fret-markers, known as black dots, were used.
When rosewood replaced maple for the fretboards, in order to make fret-markers more visible, Fender preferred to use opaque white dots, which often over time tended to turn yellow and become light brown, that today are known with the term paper dots or, more frequently, clay dots. Being composed by a fibrous material (that, analyzed in the laboratory, turned out to be mainly made up of zinc hydrochloride and cellulose), and not by a pasta called "ivorina", as sometimes erroneously reported, they were inserted in the fretboard as discs only 0.0625 inches tall, so thin that, during refrets, they could even jump off. It appears that some of the very first fret-markers used on the rosewood fretboards were composed by a flax fiber.
Dots fitting at Fender: Black Dots, on the left, and Clay Dots, on the right. Both were discs pressed into the holes and not a paste scraped into the hole.
Until mid-1963, the space between the two dots at the twelfth fret was greater because they intersected the chord of A and that of B (wide spacing). Later the space was reduced and the two fret-markers began to be almost tangent to the two strings (narrow spacing). It is important to remember that a fixed distance between the two dots did not exist, but it could vary from a fretboard to another, even if only in an almost imperceptible way.
Fender used the clay dots on the Stratocasters until November 1964, when they were gradually replaced with slightly larger and pearly appearance fret-markers, the pearl dots, which were used on rosewood fretboards until mid-1983, year in which they were substituted with completely white fret-markers, often called whitish dots.
Obviously, when in the late '60s the maple became available again on the Stratocaster fretboards, as an alternative to rosewood, the black dots were used again, although this time the distance at the twelfth fret was “narrow”.
Also on the fretboards of the Vintage Reissues the whitish dots stood out because Fender hadn’t been able to replicate the historical clay dots. Moreover, in order not to overturn the machines, the company preferred not to reproduce even the wide spacing between the fret-markers at the 12th fret, unlike the Japanese reissues which had the correct distance

The appearance of the side markers also varied over time and followed that of the fret-markers; however, when Fender, in the early 1970s, returned to use a single piece of maple for the neck and fretboard, the black dots remained as side markers also on rosewood fretboards.
Moreover, since 1971, they have been embedded in the neck, unlike those present in the pre-CBS Stratocasters that were placed between the neck and the fretboard.