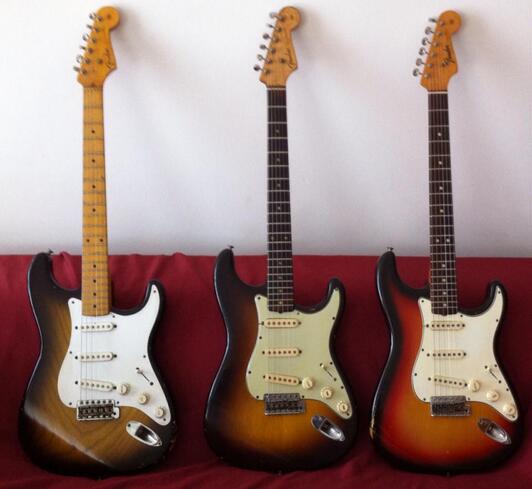 From 2-Tone to 3-Tone Sunburst

When the Stratocaster was introduced, in 1954, the only color available was the 2-Color Sunburst; actually, bodies made between March and July were painted only with dark brown on the edges, without applying the yellow, which was given by the natural color of the wood – a sort of 1-tone sunburst.  In August, however, Fender began to spray yellow for a real 2-tone sunburst.
In mid-1958, 2-Color Sunburst was changed for a 3-Color Sunburst, with red blended between dark brown and yellow.  Actually, the first three tone sunburst Stratocaster documented is a hard-tail hard tail model dated December '57 and painted in early '58.   Until 1960, Fender experienced some problems with the new sunburst finish, because, owing to chemical reaction, the red pigment usually faded easily after it was exposed to daylight.  For this reason, today there are more 2-Color Sunburst Fender instruments than those actually made.  By 1961, the problem was finally solved.
However, some real 2-tone sunburst strats were made until 1962, in particular between late 1959 and early 1960 and also in the following years some (rare) Stratocasters of the ’60s, due to extreme exposure to environmental stress, had completely lost red.

By 1956, though, special colors became available at 5% charge.  The 1957 catalogue thus specifies: “Stratocaster guitars are available in Du-Pont Duco colors of the player's choice at an additional cost of 5%.”  In the rather conservative environment of the decade, it was not common to paint a guitar in red or blue and original custom-colored Stratocasters were exceedingly rare.
By late 1957, George Fullerton came up with the idea of standardized custom color finishes.  In addition to each instrument's standard finish a few optional colors (plus blonde, which was the first to be standardized on Stratocaster model) became available, as reported in the ’58 Fender catalog: “Stratocaster is available in custom colors or blond finish at an additional 5% cost.”
In 1960 Fender released its first color chart which included 14 Custom Colors: Lake Placid Blue, Daphne Blue, Sonic Blue, Shoreline Gold, Olympic White, Burgundy Mist, Black, Sherwood Green, Foam Green, Surf Green, Inca Silver, Fiesta Red, Dakota Red and Shell Pink.  The catalog stated: “These 14 colors, plus Blond, available at 5% additional cost.  Sunburst finish standard at no extra cost.”  The chart also mentioned: “Colors subject to change without notice.”  In fact, in 1963, Shell Pink was replaced by Candy Apple Red, the only custom color developed by Fender – the others came from the automotive industry.
This was only the first change followed by others in 1965 after the​ CBS takeover, but, until 1969, Fender retained 14 custom colors plus the blond and sunburst finishes.
Since 1969, respecting the trend of the guitarists of the time who preferred "natural" Stratocasters to solid colors, Fender had begun to remove more finishes than it had added.  Custom colors were reduced to six in 1974, the 3-Color Sunburst and the Blond (which went out of catalog in 1979) included, and eliminating, the following year, the difference between custom and standard color.
New colors were added in 1977, but custom colors did not reappear until 1981 (1980 for other instruments), when Fender introduced the short-lived International Colors (codes from 580 to 586) as a custom option at a $50 additional charge for the last Stratocasters equipped with Tilt-Neck.  At the end of 1981, they were replaced by the Jewel Colors (codes from 542 to 548) available at a $75 extra charge, with the exception of the Arctic White, which remained on the list until 1983.
In 1982 three Stratoburst finishes (Bronze, Black and Blue) were introduced at a $100 additional charge.
By mid-83, the colors list was cut down to four finishes: Black, Ivory, Sienna and Brown Sunburst.
In the end of 1984, 225 Stratocaster were manufactured with a limited edition “Marble” finish (called also Bowling Ball finish), available in three equal batches of different colors (Red, Blue and Gold).  These bodies were not painted in Fullerton, but in a New York company, and sold in 1985.
'50s and '60s custom finishes were automotive paints, usually made by DuPont, except Candy Apple Red, which was an original custom color by Fender.  These paints were either enamel lacquers (Duco colors) or acrylic lacquers (Lucite colors).  Formulas were always by DuPont, but the paint could also be purchased from other suppliers.
A few custom finishes other than those listed in the chart, as sparkle colors, aqua marine, blue antigua, etc..., were sometimes applied on Fender instruments.  These unlisted “ghost finishes” were produced in Fullerton either as a “real” custom order, as part of a special run for an authorized dealer, or simply as an experiment. 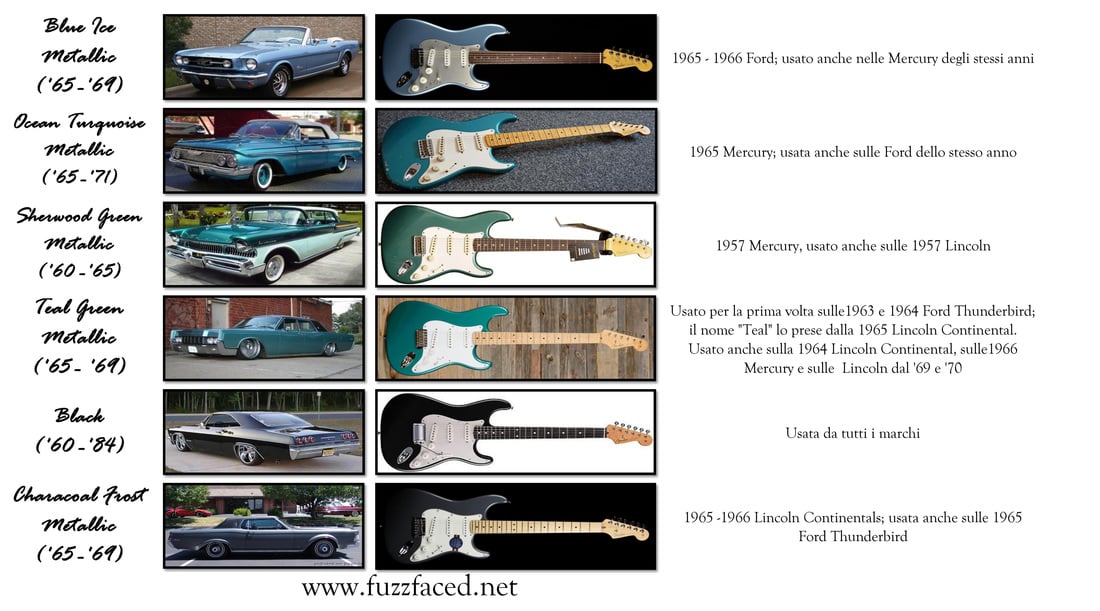 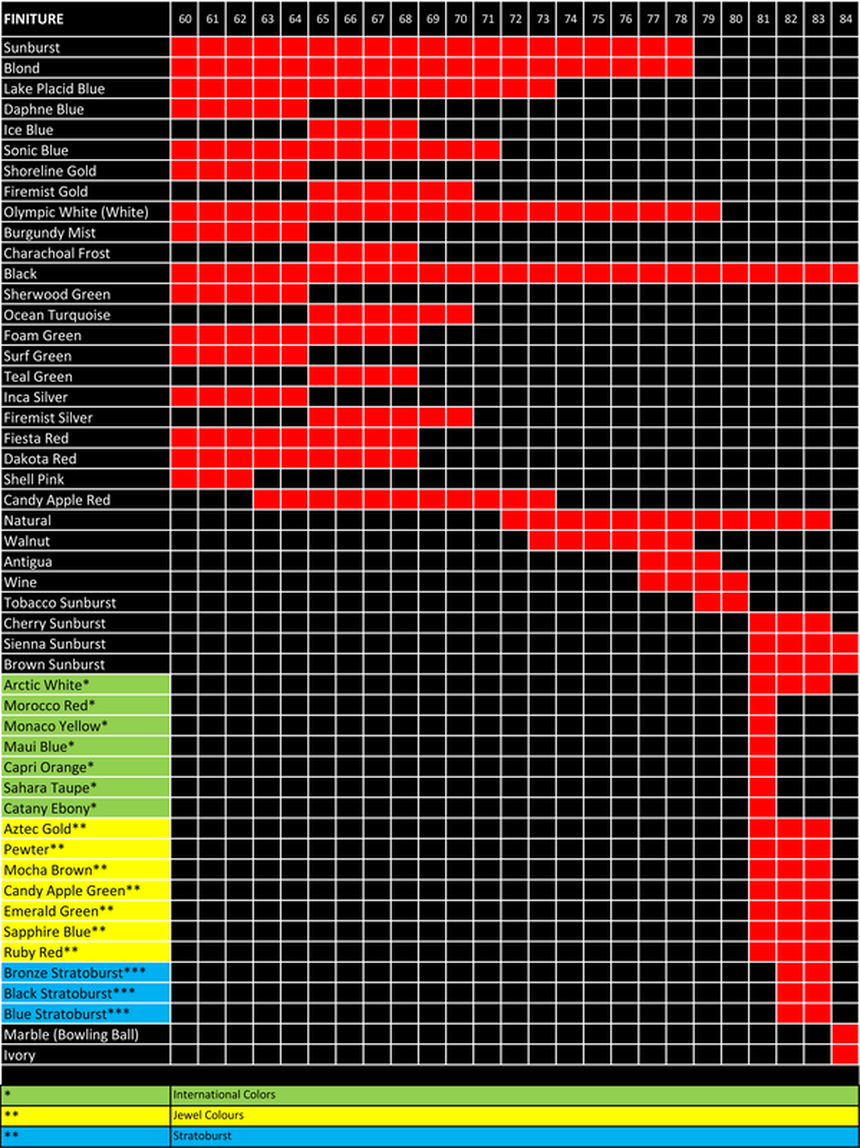