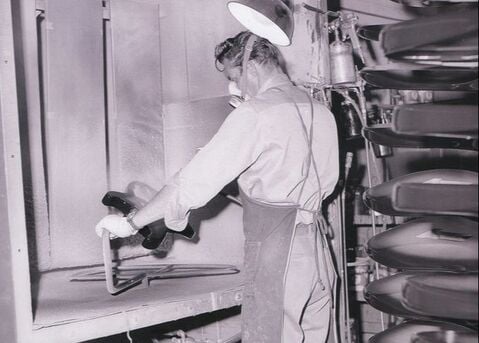 Until 1967, Fender mainly used very thin coats of nitrocellulose (Duco colors) or acrylic lacquers (Lucite colors).  Nitro and acrylic lacquers were widely used in the automotive industry because they were easy to apply and dried fast, looked great and could be polished easily to remove minor scratches.
These paints consisted mainly of three components: the pigment, the binder and the solvent.  The pigment, responsible for the color, could be organic or inorganic and was dispersed in binder, which protected it.
They were both dissolved in acetone (hence the name “lacquers”), which was an extremely fast evaporating solvent.  When lacquers dried, they formed a thin paint layer which adhered to the surface of body of the guitar.
But nitro lacquers had a problem: when they dried, they lost their elasticity and tended to crack, phenomenon known as checking.  Furthermore, some pigments tended to fade when subjected to UV rays, a phenomenon known as fading, whilst the clear coat layer always yellowed, even with minimal UV exposure (“yellowing”).  On the contrary, acrylic finishes were more UV resistant than nitrocellulose and were more elastic, which means that they were not affected by the checking problem.

HOW FINISH COATS WERE APPLIED

Until about 1968, Fender mainly used thin coats of nitrocellulose lacquers on its guitars, although some custom colors were actually done with acrylic paints.  However, nitrocellulose lacquers are fairly unstable, harder to deal with and can generate dangerous toxic fumes.  After CBS took over Fender, polyester finishes were brought in, primarily because they are better suited to mass production. Polyester was an aliphatic polyurethane consisting of long polyester molecules.
By late 1967, Fender began to replace the clear coat, made so far of many coats of nitro, with only two coats of polyester.  However, the color coat was still made up of acrylic or nitro lacquers.  The advantage, obviously, was a significant time savings, because polyester dried very quickly.  In addition, this new material did not turn yellow over time and was much more resistant than nitro.
However, it should be bear in mind that not all Fender guitars were completely finished with polyester, some colors continued to have the old nitro coating.  Moreover, also the front side of the headstock stayed entirely lacquer, even though the rest of the neck was polyester finished, because decals reacted with polyester, and completely nitro necks dated 1967 and 1968 are not uncommon.
In late 1971, thicker coats of polyester, used as clear coat and under coat, soon generated a major change in the look and feel of Fender guitars as the company developed its “Thick Skin” high-gloss finish, whilst finishes used on '50s and '60s instruments went down in history with the nickname “Think Skin”.  Indeed, '70s bodies were sprayed with anything like 10-15 coats of polyester!
'70s were years of strong experimentation, during which numerous alternatives and combinations had been tested.  For example, the Olympic White kept a nitro clear coat (with a polyester undercoat) until 1977; the sunburst also in this period was made in the same way.  In short, there wasn’t a standard rule.
In 1979 Fender, under pressure for the pollution caused by the extensive use of polyester, tested on the Anniversary Stratocaster a water-based paint, but the result was disastrous: the new finish broke after a few weeks, and consequently Fender was forced to return to polyester.

By late 1981, under the Schultz-Smith management, a new type of polyurethane, applied thinner than the previous polyester, began to replace it for the clear coat, in the Standard Stratocaster known as “Smith Strat”.  However, polyester was kept as undercoat.  Shortly before the close-down of the Fullerton plant Fender started to use it also for the color coat.  The new 1987 American Standard Stratocaster exhibited a polyurethane finish, but polyester was still used as undercoat to better adhere the color.