The end of JV and SQ era: new series explained 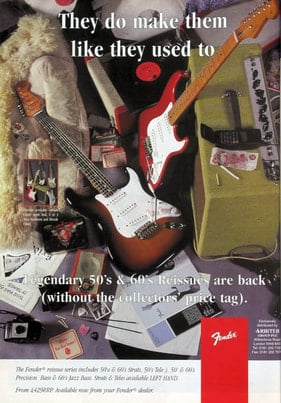 The end of JV and SQ Strats

In order to avoid ruining the market for Fender, but to hinder oriental copies, between 1982 and 1984 the only Japanese export reissues were Squier.  The JV and SQ era ended in 1984 and, between 1984 and 1987, Fender Japan continued to export Stratocaster using other serial numbers: at the beginning the "E series", to which first the "A", "B" and "C" were superimposed and, subsequently, the others.
The new export guitars, fundamental to supporting Fender after the closure of the Fullerton factory, were divided into Standard and Contemporary - both Fender and Squier - and Reissue, that would be called Collectables ​(or Collectibles) starting in 1992.
It was evident, however, that Fender began to export only the lower quality models after the JV’s and the SQ’s, so as not to run the risk of a self-competition, leaving the best guitars in Japan.  The domestic ST, SST and CST Stratocasters continued to be produced - and obviously intended only for the Japanese market - with serial numbers different from the JV one.
Many domestic Stratocasters have arrived today in Europe and USA, often with very different specs, so that it is not easy to distinguish them from those that were initially intended for export.
Qualitative differences between the Japanese reissues and the American ones were, at first, very few.  On the contrary, high-end JV’s are often considered superior to the Americans of the same period. However, over time, Made in Japan Stratocasters for export began to undergo some changes, especially regarding woods, pickups and electronics, and their quality gradually started to deteriorate.  So, while since 1987 the Squier brand had been produced also in other countries (first in Korea, then in India, China and Indonesia, without forgetting the United States – yes, they were made in US too! – and Mexico), the interest in these guitars diminished considerably due to a further decline in their quality.
​
In 1985 the MIJ domestic Stratocasters were divided into Fender Vintage Series, Current Series, Collectors Series and Boxer Series.  Many domestic Stratocasters have arrived today in Europe and USA, often with very different specs, so that it is not easy to distinguish them from those that were initially intended for export.
The Vintage Series first included reissues of the Stratocasters of 1954, 1957, 1962, 1972.  Many different models were made.  Some featured US pickups and electronics, selected woods and lacquer finishes, others were cheaper and featured Japanese electronics, ceramic pickups, and polyester finishes.  In the spring of 1987, the '70s style reissues were all brought together in the Current Series.  The typical Current model had a large headstock with CBS Logo, bullet truss rod and 3-bolt neck plate with micro tilt adjustment.  It is important not to confuse these Currents Series Stratocasters with the CST models of the 1983 Squier branded Current Series.
In 1984, the entry level Zinger Series was released with the aim of offering guitars at a low price, as the ST57-55, ST62-55, and the ST72-55.  The name "Zinger series" soon disappeared and was absorbed by the Fender Current Series.
The Collectors Series has been developed separately from the regular lineup since around 1985.  In 1986 it was composed of Players models, reminiscent of the Stratocasters of famous musicians, as the ST72-65 with a rosewood scalloped fingerboard, which is said to have been released at the request of Yngwie Malmsteen, ExTrad models (see next chapter), a luxury line which represented the best of the made in Japan luthierie, and Limited Edition guitars, such as the 12 strings STXII or the Paisley Stratocaster.
In 1984 the new Boxer Series was developed as an evolution of the Contemporary Series and to bring Fenders to a new era.  In fact, simultaneously with the production of the Contemporary export models, the Contemporary Series was renamed, for the Japanese domestic market, to the Boxer Series.  ​Its production was discontinued in 1987 and, in 1989, this series was replaced by the new Pro Feel Series.  Like the Boxer series, it created an unprecedented view of the world of Fender.
Also worth mentioning is the 1990 Squier Silver Series, made as export for Great Britain, as well.
The first thing that catches the eye of those who browse the Japanese Fender "Twang" catalog is the enormous quantity of almost incomprehensible acronyms used to indicate the instruments.  The code used for Stratocaster was "ST". For Vintage and Current Series "ST" was followed by two numbers that indicated the year the model was a reissue from. The other numbers were used to show the retail price. Other letters were used, such as LS (Lace Sensor), US (US Vintage Pickups), TX (Texas Special), RV (Real Vintage), VSP (Vintage Special Project), DMC (Di Marzio Collection), G (Gold Hardware), B (Bound Fretboard), L or LH (Left Handed), M (Medium Scale) and SC (Scalloped), just to name a few.
However, it's important to keep in mind that Fender Japan was never consistent and not every guitar that came off the line matched specs of what was in the catalog.

​Note: It’s a common question regarding what the letter and number markings mean on the neck heel and neck pocket of MIJ and CIJ Fender instruments.  The letters and numbers are internal Fujigen or Dyna coding.  Many people take their guitar apart and think because the neck or body has a marking that’s not the model they know they have, a mistake was made.  This isn’t true, it means the neck or body with a different code is perfect, it just is perfect for more than one model instrument.
Fujigen made hundreds or thousands of models from 1982 to 1997, most sold only in Japan.  But adopting this system identifying that a particular neck or body was suitable for multiple instrument models saved time money and cut down on confusion.  Speculating on what the codes might mean is fun, yes, but totally pointless.  For example, necks signed with “ST-362” and “ST-357” were used on different types of Stratocasters and cannot indicate just one model nor its name.  Furthermore, Fender ST-357 and ST-362 models have never been on the catalogue.
Another point needs to be made: if we find ourselves in front of a Japanese Stratocaster and we live in Europe or the United States, the possibility of it being an “export” guitar is significantly higher than of it being a “domestic” model.  Therefore it isn’t worth getting confused by all the models in the Fender “Twang” catalogues because they only showed models intended for Japanese territory.  It’s consequently easier to find the guitar on the Frontline or in catalogues aimed at the Western market.  Nevertheless, there is always a slight possibility that a “domestic” guitar arrived in the Western world through private sales, therefore it’s worth it, whenever possible, to find out about the origin of the Stratocaster in question.
Antonio Calvosa
​