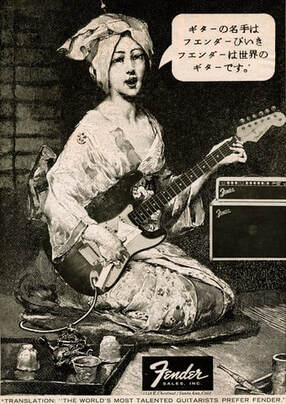 The first Made in Japan Stratocasters, produced since April 1982, were based on the Stratocasters of 1957 and 1962.  Their serial number started with “JV”, acronym that stood for Japanese Vintage, and arrived at Fender even a few months before the production of the American Vintage, surprising Dan Smith and his collaborators for their high build quality and creating the myth of the JV Stratocaster: “Everybody came up to inspect them and the guys almost cried, because the Japanese product was so good. It was what we were having a hell of a time trying to do,” Smith stated.
These guitars were surprising for the way they reproduced specs of pre-CBS guitars (small headstock similar to the original, wide spacing of the dots at the twelfth fret, deep contour body), with the exceptions that the neck profile of the '57 was “C” shaped and the string tree was butterfly-shaped (and not circular) like the '62.  The '57 models were identified with the initials ST'57-65, ST'57-85 and ST'57-115, the '62 models with ST'62-65, ST'62-85 and ST'62-115.  Of all the JV's ever made, only the ST-115 and the ST-85 had a nitrocellulose finish; all the others were in thin finish polyester. 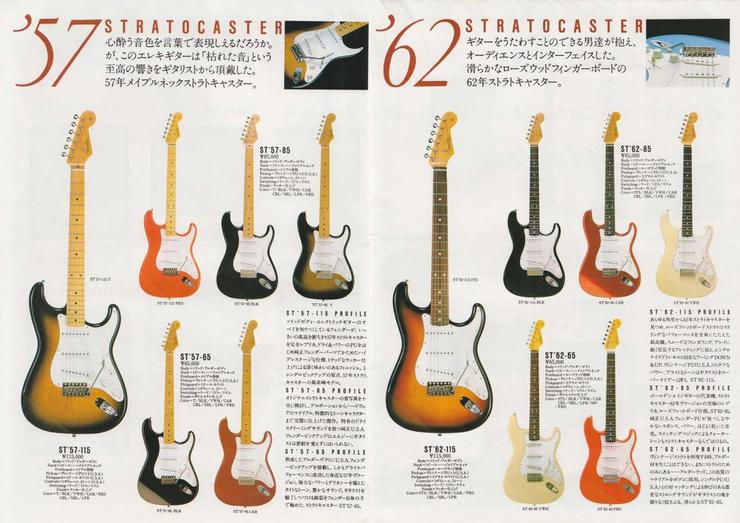 At first, the JV's were destined only to the Japanese market, but, due to the great request for Vintage Stratocasters, Fender decided to export them also in Europe with the Squier brand, a name derived from V.C. Squier, a violin and string company for musical instruments bought by Fender in 1965.
The first Squiers appeared as early as April and were marketed as ​Squier Series '57 Vintage Stratocaster and Squier Series '62 Vintage Stratocaster.  The first country where the Japanese Stratocasters arrived was the United Kingdom, in May, but soon after they were distributed throughout Europe
But this was still not enough: towards the end of 1983, as the Vintage Stratocaster production couldn’t meet the domestic demand, Smith decided to import the Squier also in the United States.  It was however necessary, to avoid the risk of a self-competition, to make new instruments that could be easily distinguishable from American Stratocasters: then began the production of the Squier Stratocaster, characterized by large headstock with bullet truss rod and three bolt neck plate, also known as Squier SQ Stratocaster due to its serial number (“SQ” stood for Squier).  Initially destined only for the US market, these guitars were exported all over the world.
Between the end of 1983 and the beginning of 1984 the SQ's were also advertised on the MTV television channel.  In the spot seen there was a guitarist with a Squier in his hand, while a background voice said: “Great musicians have always picked the special sound of Fender.  Now it's your turn with Fender's new Squier guitars.  The look, the sound and quality are everything you'd ever expect.  Here's what's you'd never expect...” - and at that point a big "from $169" appeared on the screen.​​

DOMESTIC GUITARS BETWEEN 1982 AND 1984: SQUIER SST AND CURRENT STRATS

In October 1982, Fender Japan launched an entire line of Squier guitars for the Japanese market only, the SST-45, SST-50 and SST-55, the names of which had no reference to a particular year, and recognizable by a blue sticker on the back of the headstock on which it was printed "45" or "50" or "55".  However, these guitars, whose serial numbers started still with "JV", did not have American pickups, but SQ-4 and SQ-5 Hotrod made in Japan pickups.
In 1983 and 1984 the cheaper SST-30 and SST30s, whose pickups were the ceramic SQ-3, with the typical magnet bar and the hexagonal, low-budget tuning machines without slots.
In 1983 Fender Japan launched also the domestic Current Stratocasters (CST-30s, CST-45, CST-50 and CST-55), guitars which, at least at the first, had "JV" serial numbers, but referred to export SQ models (so they had the large headstock with bullet truss rod and three-bolt neck plate), thus creating no small confusion among the appraisers of MIJ.  They could be distinguished from those that would be called Collectables (see next chapter) also for their flat poles pickups.
SST and CST Stratocaster production didn’t end in 1984, but continued in subsequent years with serial numbers different from "JV".

It is important to keep in mind that the JV's could be both Fender and Squier, but the export guitars were all Squiers (or Fender "Squier Series") and were marketed as​ '57 Vintage Stratocaster and '62 Vintage Stratocaster, while Fender ST and Squier SST (where SST stands for Squier STratocaster) were destined for the Japanese market only (and were called "domestic").
The body of the first export JV's was in sen, a wood with very marked grains (called sen ash or Japanese ash because it was very similar to ash, but actually its name was Acanthopanax Ricinifolius of the family Araliaceae), and in alder for the domestic models.  The sunbursts available were two tones for the '57 and three tones for the '62; but, according to the model, solid colors (such as Vintage White, Black and Fiesta Red) were also frequent.
The first JV Strats produced in 1982 (domestic) exhibited a Fender Spaghetti logo slightly larger than the original and following export guitars (it was reduced in mid-1983), below which there were two small decals, "WITH SYNCRONIZED TREMOLO" and "MADE IN JAPAN".  In mid-1983, the MIJ decal of the domestic guitars was moved to the base of the neck.  Of course, "STRATOCASTER" and "ORIGINAL Contour Body" decals were present. ​

Very first domestic JV '57 Stratocaster. Although the "e" letter of the Spaghetti Logo is pointed, it differs from the pre-CBS one because it is bolder. For example, there is no space between the "e" and "r".
These first ’57 and ’62 export JV's, however, were not intended for the US market, but only for the European one; their production began in the spring of 1982 and lasted only a few months. It seems that about 3000 models had been made.  Their staggered poles pickups were American, almost always grey bottom, with printed date, and, sometimes, red bottom.  The selector was three-way.  However, the first JV's produced might have also flat pole pickups of the '70s and/or a five-way selector.  Or, rarely, a X-1 pickup at the bridge!  Some of these guitars could have an unusual radius of 9.5" and some of the very first '62 JV Stratocasters had pearl dots.
In the summer of 1982 export JV’s headstock was completely redesigned: a big gold Squier logo, below which a small decal "MADE IN JAPAN" stood out, replaced the Spaghetti logo; to its right the decal "STRATOCASTER" appeared in big letters, as in the '70s large headstock, below which "BY Fender" was added.  The use of sen for bodies began to diminish, with increased use of alder and basswood.  The pickups were American black bottom; they had no printed date, but often had yellow or white handwritten marks on their surface.
It is therefore important to know that not all JV's are the same and that "JV" is not always synonymous with quality.  The first domestic Stratocasters were excellent guitars, although very different from each other.  ST-115, the top of the line, had made in US components and nitro finishes; ST-85 was very similar to the first one, but many components were Japanese; finally, ST-65, the economy model, with a thin polyester finish, had only American pickups and it was practically identical to the first export Squiers.
Soon after the introduction of the first export Squiers, Fender Japan presented the first line of domestic Squiers, very similar to the export guitars, but with SQ-5 Japanese pickups, and the springs instead of the rubber to adjust their height.  Shortly afterwards the much cheaper SST-45 and SST-30 were also introduced. It is therefore evident that there is a great qualitative difference between the many JV Stratocasters in circulation today.  It is not so obvious that a JV is always a great guitar.  The same considerations must be applied to the Current Stratocasters.

In March 2022 Fender launched the new JV Modified Series, inspired by the sought-after ’80s JV guitars.  Obviously, they didn’t have nothing to do with original Japanese reissue.  All the guitars in the range feature a basswood body – a tonewood rarely found in the US Fender catalog – and Thick Soft “V”-shaped maple necks with 9.5”-radius fingerboards and medium jumbo frets.
Antonio Calvosa

Pickguard of a ST-115 Stratocaster. Many first domestic JV guitars featured "PICK UP MADE U.S.A." sticker