Buddy Holly at the Ed Sullivan Show, 1957
If you think of a guitar today, the first one that comes to your mind is the Stratocaster.  But imagine the surprise of the public in 1957 when the 21 year-old Buddy Holly and his Fender appeared for the first time at the Ed Sullivan show!  It's like that not many even recognized it as a guitar. It didn’t have the sound box and it was thin, with an ergonomic and rounded profile.  Moreover, its double cutaway design didn’t call to mind a guitar at all. Yet, despite the fact that more than half a century has passed since its birth, the Stratocaster is today the most played and most imitated electric guitar. It is undoubtedly the electric instrument that has most influenced the history of music in the 20th century. And it seems never to grow old.
The events that led to its development date back to many decades ago; obviously, the exact details or dates do not perfectly coincide in the stories of the main protagonists. As reported by ​Leo Fender, the idea of the Stratocaster took shape in 1951 from his desire to improve the Telecaster. Leo wasn’t a guitarist but he was a great listener, and he took advantage of the proposals of the guitarists he attended -​ Freddie Tavares, Rex Robert Gallion and Bill Carson over all - to make the Telecaster better. While Freddie gave suggestions concerning design and technical aspects, (the scale, the distance between the strings and the nut and between these and the bridge, etc.), Rex and Bill provided the musician's point of view.
Freddie was a steel guitarist born in Hawaii in 1913 who often played in Los Angeles - the opening slide in the Looney Tunes cartoon theme is his. He met Leo in 1953 through Noel Boggs, another steel guitarist promoter of Fender products, and he began working as his assistant, giving up the career as musician. He can be considered, along with Leo Fender, the father of the Stratocaster.
Rex was a country-western guitarist; he was specifically involved in the evolution of the "Custom Contour" body, and is often quoted as having asked Fender: “Why not get away from a body that is always digging into your ribs?”
Bill was a famous country guitarist who had played in the Eddy Kirk Band, for Hank Thompson and for Billy Gray. He met Leo at the end of 1951 and was hired by Fender at the end of 1957 as salesman. Leo used to let Bill test the prototypes of the new guitar. He brought several of the Telecaster's perceived shortcomings to Leo's attention - two strings per saddle, the limitation of two pickups and the sharp-cornered body - and provided essential feedback to Leo. He needed a more comfortable body,
“fit like shirt,” Bill used to say. Indeed, he had already cut the front edge and the back of his Telecaster for this purpose.
Bill remembers that Leo started talking about the Stratocaster in 1952, just before Fender moved from the small factories in Pomona Avenue to the new larger ones at the crossroad between South Raymond Avenue and Valencia Drive, in Fullerton. According to Freddie Tavares, work on the guitar design began only in '53. George Fullerton who was a close associate of Leo, was of the opinion that Leo had already put down some ideas, such as the "comfort contoured" shape of the body and the double cutaway, similar to that of the Precision Bass, besides studying pickups and a new bridge.  However, it was with Tavares’s entry into the company that the soft and graceful lines of the Stratocaster took shape.
Leo worked hard on the windings of the pickups so that the new guitar could adapt to more musical genres. He also decided to offset the height of each single pole to obtain a more balanced response from each string, thus differentiating them from the Telecaster flat-pole pickups. The 3-way switch allowed to select only one pickup at a time, but the guitarists soon understood that it could be blocked halfway generating the classic hybrid sound. This eventually led to Fender's introduction of the 5-way switch in 1977. At ​George Fullerton’s suggestion, a new jack input, which would have entered sidelong from the guitar’s top, was introduced.
Behind the nut, the strings reached straight and parallel the keys that were all on the same side of the headstock, whose base was wider than the Telecaster’s one to avoid the logo being hidden by the strings - in this way recalling Merle Travis Bigsby’s headstock.

Comparison between Merle Travis's Bigsby, a pre-CBS Strat ed a CBS one 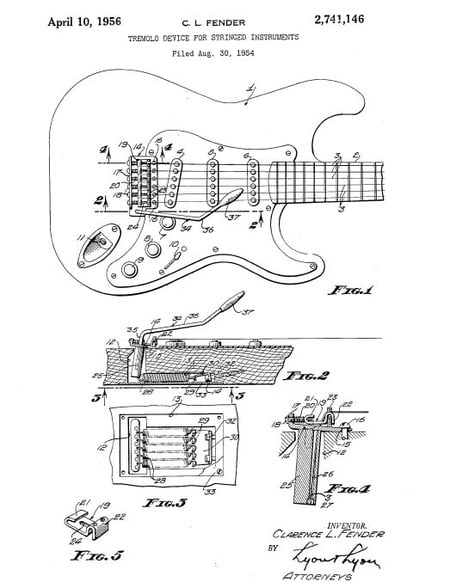 Synchronized Tremolo Patent, filed on 30th August 1954, approved on 10th April 1956
Neck and fretboard were constructed with a single piece of maple on which stood the black dots typical of the first Stratocasters. As in the Telecaster, the truss rod was inserted from behind, so that you could notice in the back a line due to the insertion of a "strip" of walnut (called skunk stripe). Leo Fender remembers that he chose the maple for the neck not for its special sound qualities, but for its “blonde” color which was trendy among the guitarists of the time. Moreover, since he was a very practical man, Leo chose to fix the neck to the body with four screws, as in banjo, so that it could be easily removed and transported if repairs or small calibrations were needed. By the same principle the pickups were also mounted on a pickguard that could be easily removed from the body of the guitar. The pickup covers were made of plastic and no of metal, as in the Telecaster, to reduce microphone feedback.
According to Tavares, the Stratocaster would have seen the light long before if it wasn't for its tremolo, (actually a vibrato unit!), which was developed in more than six months (one year according to Carson and Fullerton). Leo resolutely wanted this type of bridge to compete with all the tremolo units, as the Bigsby’s bridge, that were gaining ever greater success among the guitarists of the '50s and that most of the time consisted of fixed bridges on which the strings were stretched or loosened. But they all had a big fault: they did not always bring the instrument back to proper tuning. It seems that Leo Fender, George Fullerton and Don Randall had discussed building a new type of bridge even before the collaboration with Bill Carson.
The first tremolo unit developed by Leo was, according to many, similar to the one that was seen years later in the Jazzmasters.  But it was evident that this first unit was losing a lot of sustain due to the side vibrations of the strings which were not sufficiently stable to prevent energy dissipation.
The second unit, which Leo called Synchronized Tremolo, was a real revolution in the field of electric guitars: in fact, it provided that tremolo units and bridge would move simultaneously back and forth as if they were a single body (hence the term "synchronized"), minimizing friction and maintaining the tuning of the instrument, at the same time securing much more than a slight variation in the pitch of the guitar sound. This new unit was implanted in the body through its base plate thanks to six strong screws placed in front of each saddle. On the opposite side of the base plate, hidden inside the body of the guitar, a heavy inertia bar (or "tremolo block") of milled steel was fixed, inside which the six strings were stuck. The right tension and the return to the correct tuning were ensured by anchoring the final part of the inertia bar to the body of the guitar thanks to six springs, (or less than six, depending on the guitarist's taste), parallel to the strings. Leo built this futuristic and very simple bridge using Race & Olmestead’s precision instruments.

Don Randall, President of Fender Sales, wanted to present the new guitar at the 1953 NAMM, but Leo objected because, in the first prototypes, the Synchronized Tremolo had still some faults such as the saddles frequently jumping under strain. However, at the beginning of 1954, the new guitar was ready. At the suggestion of Don Randall, it was called Stratocaster, logical consequence of the reference to the space of the Broadcaster and Telecaster series, since the new instrument would have brought the design of the guitars into a new stratosphere. The first leaflets depicting the Stratocaster were printed in April and the new guitar was shown for the first time in the August edition of the International Musician.  In a letter to the dealers, Fender stated that it was ready to supply them as early as May 15th.  Only later, in August 1956, was the patent of the Leo vibrato unit was approved with the number 2,741,146 to prevent it from being copied.
Indeed, there are conflicting rumors about the actual date on which the Stratocaster was put on the market. For example, Forrest White claims that the first tremolo Stratocasters were marketed only in October 1954 and that all previous models were only prototypes; but some reliable collectors have Stratocasters dated March and April '54 that aren’t prototypes, they are official Stratocasters. This discrepancy is probably due to the fact that White, as plant manager of Fender, points to October as the month in which the new guitars were released because only then the first Stratocaster order arrived at Fender Sales, (around one hundred pieces), although many Fender agents may have sold or given some Stratocasters to local sellers before this date.
The body of the new guitar, normally consisting of two or three pieces of ash, had a nitrocellulose sunburst finish and was covered with a single-layer pickguard made of vinyl plastic or based on a new thermoplastic polymer, ABS (acrylonitrile butadiene styrene).  The pickup covers were in white plastic and the volume and tone knobs were higher than the current ones and characterized by a flared edge, particularly narrow, above which were the numbers; these knobs were called short skirt, and they differed from the long skirts, lower and with a wider border above which the numbers were more visible.  The plastic used for these accessories was polystyrene, a thermoplastic polymer often confused, even today, with bakelite. However, this material soon proved to be too fragile and was replaced at the beginning of 1957 by the more resistant ABS.
The bridge was covered with a chrome coating with the only purpose to improve the appearance of the guitar which was generally removed immediately after purchase. Thanks to the 25.5" scale, higher than that of Gibson, and the Alnico magnets used in all three pickups, the sound of the Stratocaster was clear, clean and bright. The radius was about 7.25", but, depending on how the sander was set up day to day, it could undergo slight variations.

Stratocaster cases
The starting price of the Stratocaster was $249.50 without case, about 10% more than the Gibson Les Paul Gold Top and about 30% less than the Custom. The few models made without tremolo cost $229.50 without case. With $39.95 in addition you could buy the Stratocasters inside the shaped cases built by Baldwin. These cases were called poodle cases due to the fact that whoever carried them seemed to be walking a poodle. At the end of 1954 they were replaced by the more resistant Victoria Luggage tweeds, which, with different variations in style, were used throughout the golden age of Fender. Initially, only a few Stratocasters were produced, but by October production had reached full capacity. Because of the growing demand and because for Leo the quality control was fundamental in order to maintain a high production standard, he hired as his plant manager Forrest White, an old friend and an expert in industrial engineering and business management, under whose direction the company became more efficient and able to rationalize production and meet back orders.
Antonio Calvosa