Stratocaster Serial Numbers: made in USA 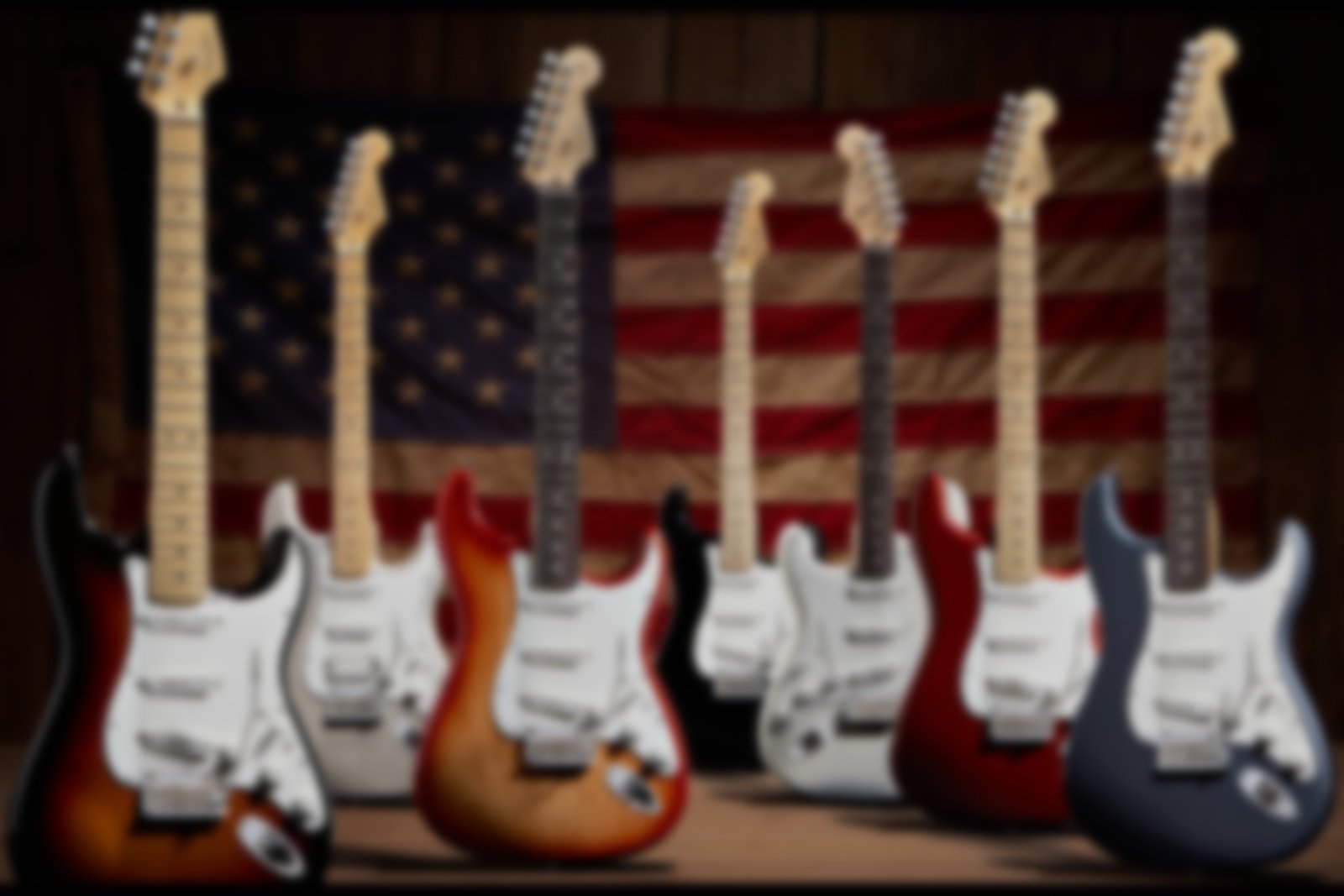 But, probably, it was the first “production guitar”, whilst earlier Stratocasters might have been salesman samples, which were sold to the dealers.  And they were not prototype at all, in terms of being experimental or anything like that.  Certain aspects of these early 1954 “pre-production” Stratocasters looked primitive, almost handmade compared with later versions.
In December 1954, Fender merged the serial numbers of its solid body instruments (Telecaster, Esquire, Precision Bass and Stratocaster), which until that moment had distinct numbers, in a single numbering line. Thus, Stratocaster serial number jumped about 5000 numbers ahead and the last 1954 Stratocasters reached the 6000’s.
By the end of 1955, a “0” was added in front of the 4-digit of the 8000’s.  Hence, Stratocaster serial number became 5-digit.

When the “L” Series reached the 90000’s, after the CBS takeover in 1965, serial numbers went from five to six digits, starting from 100000, but without the “L” prefix.  The new neck plates were stamped with a large “F” letter, typical of the CBS Stratocasters, hence the F-Series nickname.
Despite these neck plates appeared in mid 1965, until the beginning of 1965 they overlapped with the L-Series, in order to finish all the neck plates in stock.
Due to a drastically increased production after mid-1965, the serial numbers ran from 100,000’s to 700,000’s in just eleven years.
​

Serial Numbers on the headstock

In late 1976 Fender stopped stamping the serial number on the neck plate and began to incorporate it into the headstock decals.  A new 7-digit code was adopted, with a 2-digit prefix indicating the year plus five numbers identifying the guitar.
In the late '70s the serial number was also printed on a sticker placed into the body pickups cavities, underneath the pickguard and into the neck pocket.
At first, the serial number had a simple “76” prefix in bold numerals, which in a few months was replaced by “S6”, with “S” standing for “seventies”.
Later, other letters were used to identify the decades: “E” in the 1980s, “N” in the 1990s and “Z” in the 2000s.
Until 2010, the American Deluxe and the Signature guitars follows the same serialization scheme, but their serial numbers were preceded respectively by “D” and “S” letters.  In 2010, Fender decided to merge their serial numbers with that of the American Standard Stratocaster.  Thus, since 2010, Fender Stratocaster serial numbers had the simple “US” prefix followed by the last two digits of the year (e.g. “US12” for 2012) in bold.
This scheme, clear and simple, actually is not a reliable method to date a Stratocaster.  In fact, at the beginning of a new year the old decals were not instantly discarded and continued to be used into the new year.  Usually new decals were applied only after some months - ca. 3 months for the US Stratocasters and ca. 4, 5 or 6 months for the Mexican Stratocasters.
Moreover, there are other exceptions to this scheme that must be considered.

Special Series and other prefixes

​VINTAGE SERIES/AMERICAN VINTAGE/AMERICAN ORIGINAL SERIES:
The Vintage Stratocasters, unveiled in 1982, featured the serial number stamped on the neck plate starting with “V” and without any correlation with the year of production.  Until 1988 their serial number was V + 4 or 5 or 6 digits.  From 1989: V + 5 or 6 digits.
By the end of 2012 Fender began to indicate the year of the issue: “V12” for the American Vintage Strats made in 2012, “V13” for those made in 2013, and so on.
Since 2018, the “V” prefix was used for the American Original Stratocasters.

SIGNATURE SERIES:
Until 2009 the Signature series followed the same rule of the American Standard series, but their serial number was preceded by the letter “S” (e.g. SN5xxxxx for 1995).
But in the late '80s, Fender ordered a large batch of the “SE” decals.  It was likely a mistake.  Thus, they used them - and continued using them well into 1993. When the “SE9” prefix decals were used up, in about 1994, Fender started using "SN" serial numbers.
In 2010, Fender merged the serial numbers of all its guitars, with the exception of the American Vintage Series and the instruments made by Custom Shop.  Therefore, Signature models followed the same serialization scheme of the American Standard guitars (US10xxxxxx, US11xxxxxx, etc.), without the “S” prefix.

AMERICAN DELUXE SERIES:
The American Deluxe Stratocasters, on the market since the late '90s, had a serial number that followed the same rule of the Signature Strats, with the difference that it did not start with the letter “S”, but with the letter “D”.  Therefore, the prefixes had been DN8, DN9, DZ0, DZ1, DZ2, etc., up to DZ9.  Since 2010 also the serial numbers of the American Deluxe Series adapted to the "universal" one of the Stratocasters made in USA with the prefix "US".

OTHER PREFIXES INDEPENDENT FROM THE YEAR OF PRODUCTION:
G: The Strat
CA: Gold Stratocaster
CC: Walnut Strat
GO: Gold Strat
AMXN: California Series
R: Time Machine and Relics Series, stamped on the neck plate
CS, CN, CZ: Custom Classic, Classic Player and other Custom Shop guitars, stamped on the neck plate
TN7: Voodoo Stratocaster and '68 Reverse Strat Special (ca. 1992-1998)​
FN2: Floyd Rose Classic Stratocaster and the first Floyd Rose Classic HH (and HSS) Stratocaster
EE: Stratocaster made in USA but intended for the export market
I: Stratocaster made in USA between 1989 and 1990, but intended for the export market, which have printed at the neck base "Made in USA"
​

SERIAL NUMBERS, MADE IN THE USA GUITARS