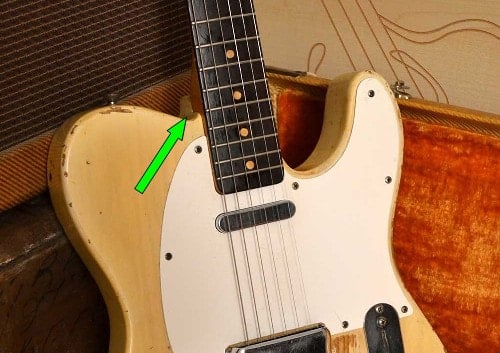 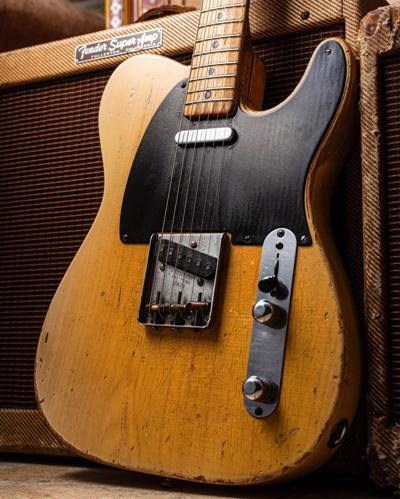 1952 Blackguard, Courtesy of Eddie Tatton
Esquire prototypes, early samples and pre-production models featured a Oregon Pine (Pseudotsuga Menziesii) body, but, in October 1950, Leo Fender quickly chose to use more eye-catching Northern White Ash (Fraxinus Americana) and Red Ash (Fraxinus Pennsylvanica) bodies that fit well with the semi-transparent blond finish, generally made of two pieces (although one or three-piece bodies are known to exist) often meticulously matched to emphasize the grain patterns - even diagonal seams across the entire body were not unusual on early '50s Fender guitars!
Ash is an inconsistent timber.  It can sport some striking grain patterns and may appear very light or it can be pretty plain and heavy.  Its grain and its weight depend both on where the tree grows and which portion of the tree is used to cut the body.  Generally speaking, the more water is absorbed by the tree, the lighter the eventual wood spread.  When saturated with water the grain gets wider but, as the water recedes under warmer weather, the wood dries out and becomes much lighter.  Usually, the bottom portion of the tree usually absorbs more water, particularly during winter, than the top portion.
So, the term “swamp ash” does not refer to any particular species of ash as often reported, but is generally used by luthiers to describe lightweight wood yielded from ash trees which are usually found in wet or swampy areas, and obtaining light and figured ash is not a question of luck, but a matter of specifications and price when ordering wood.
Since weight was not a prime consideration when procuring ash, you can find Fender Telecaster bodies of variable density.  Usually, ash bodies from the '50s were lighter on the average than those from the '60s or '70s.  The weight of ash purchased in the mid-60s is probably one of the major reasons behind the Thinline Telecaster.
The pine bodies of the first prototypes were 1.5” thick, whilst many early ash bodies were 1.69”.  Finally, in October 1950, Fender started the production of the first 1.75” thick bodies, which became the standard trim on Telecaster-style guitars.  The change to a thicker body was due to the need of a deeper control cavity when Leo Fender decided to replace the push/pull switch with the 3-way switch.
In mid-1956, Fender started using alder for the sunburst Stratocaster and all instruments that were not finished in blond, because it was less porous and therefore easier to paint.
Regular Telecaster and Esquires featured a stock blond finish and retained an ash body.  By 1956, though, special colors became available at 5% charge, which means that custom colored Telecasters were produced with an alder body.  Although sunburst was not a special finish per se at factory level, it was a true custom color for regular Telecasters and Esquires, and '60s sunburst models were fitted with an alder body, whilst the extremely rare late '50s sunburst Telecaster and Esquires retained an ash body.
In mid-1959, Fender unveiled the new Telecaster Custom, which came in a 3-Color Sunburst bound alder body - but custom colors were available.  Until 1972 most Customs were fitted with an alder body.
In 1963, Fender introduced an optional mahogany body and a reddish finish on the regular Telecaster, available on special order.  It was not produced in large quantities and was discontinued after 1965.
The Thinline Stratocaster, introduced in 1968, was at first released in only natural ash and mahogany bodies.
However, occasionally Fender used other timbers, such rosewood, used on the Rosewood Telecaster produced over 1969-72, hackberry wood, in lieu of ash on Telecasters in the '70s, zebrawood on a few prototypes, American black walnut on the Walnut Elite Telecaster.

George Fullerton, Leo Fender's close friend, was a very good woodworker, and it is to him that we owe the original shape of the Telecaster.
Due to new manufacturing techniques and new machinery, '70s and probably a very few late '60 Telecasters had a different carve of the upper shoulder and a slightly different body shape.
In the '70s the typical notch found on the '50s and '60s bodies was removed from the bass side of the neck pocket.
Furthermore, the upper edge of the body of '50s and '60s Telecasters joints into the neck at the 17th fret after a fairly steep curve, whilst, on most '70s and early '80s guitars, it joins the neck at the 16th fret after a much flatter curve.  In mid-1981, the new Standard Telecaster featured again the steeper curve.
1957 vs 1978 Telecaster body shape. Courtesy of True Vintage Guitar
The neck pocket of the early '50s Telecasters didn't perfectly match the shape of the neck heel.  Indeed, the body featured a protruding “lip” below the neck heel because the neck pocket was initially shaped with perpendicular sides, without considering that the neck heel does not form a 90° angle.  By approximately 1956, the neck pocket was drilled with a slightly smaller angle to perfectly fit the shape of the neck heel.

Initially, Leo Fender didn’t consider a neck pickup and Esquire bodies were not routed for it until the Summer of 1950. Hence, the earliest Esquires featured only two top routing: for the bridge pickup and the controls.
Then, Telecaster-style guitars featured three top routings: for the neck pickup, the bridge pickup and the controls.  It’s important to bear in mind that once Leo Fender opted for the dual pickup option, both single and dual pickup guitars shared the same body routings regardless of what model would be final assembled.
The first pre-production non-truss rod dual pickup Esquires, made during the summer of 1950 were devoid of the truss rod channel access route, but featured a drill channel from the neck pocket to neck pickup cavity.
Around mid-February 1951, the factory changed the body routing probably because Fender employees, back in the early '50s, experienced some problems in drilling a long channel directly across the body to house the neck pickup leads into the controls cavity.  A few earliest Nocasters, dated February 1951, showed a round “donut” hole in the center of the body, under the pickguard, which were performed when the guitars had already been lacquered, to allow a second drill bit to make its way into the control cavity.
Shortly thereafter, a diagonal route between the neck pickup and the controls cavity was settled on.  This design would make it easy to drill a single straight hole from the neck pocket and the neck pickup cavity, through the diagonal channel, and into the bridge pocket.  A second short passage could be drilled from the bottom of the diagonal channel to the control cavity.  This stayed as the standard routing configuration until the summer of 1969, when new machinery and drilling equipment put an end to the need of the diagonal route, which was suppressed.  It was later reintroduced on the Vintage reissue '52 Telecaster.  Also the very first American Standard Telecasters featured the diagonal route, but, by 1988, they sported a single open channel between the neck pickup and the controls cavity.
It’s important to bear in mind that it’s not uncommon to find hand-made enlargements of the cavities on early guitars after it had been lacquered.

Dowels can be spotted on the back of the Telecaster in two places:This technique was used until the late '70s, when NC routers definitively replaced the old-style pin routers.
However, dowels have been maintained on the Vintage reissue and on some Custom Shop guitars.
It should be noted that pin router's holes were in completely different positions on the Stratocaster. They also went all the way through the body because Fender's employees had to screw templates onto both sides of the body.
The body of the Rosewood Telecaster featured one or two maple dowels in the neck pocket and in the bridge pickup cavity to ensure a correct alignment of the body halves sandwiching the thin maple core strip. 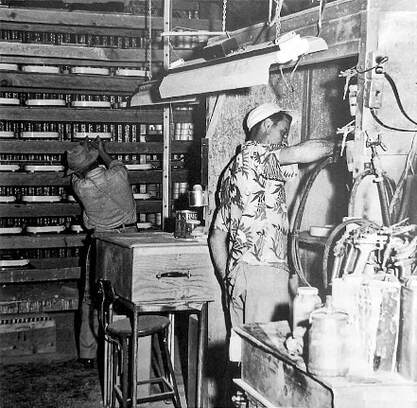 Spray boots with the Lazy Susan turntable on the right. Drying racks in the background shows how guitars dried resting on the nails. Photo from “Fender, The sound heard 'round the world” by Richard R. Smith
All Telecaster bodies that date from before the autumn of 1964 have three or four 1/16” nail holes on the front.  Fender used the nails as spacers for the painting/drying process.  Before applying the finish, three or four small nails were hammered into the body face.  The body was therefore arranged on a turntable called “Lazy Susan” and was painted on the top.  Then the body was flipped over onto the nails in order to paint the back and sides of the body.  The painted body was left on its nail legs to dry.  When the finish was dry, the nails were removed, thus leaving small holes free of paint, called nail holes or clamping holes.  However, since the body was rubbed out after the nails were removed, nail holes may have some white or pink rubbing compound junk in them.


​
Until mid-1959, older Telecaster bodies usually feature nail holes on the front face, respectively located:
In mid-1959, Fender moved  the nails to inside the routed cavities and the fourth nail positioned on the cutaway was dropped. New nail holes were respectively located:
In late 1964 Fender changed the painting process and the nails were no more used.
It should be noted that the placement of Broadcaster nail holes is slightly different than 1951 to 1958 Telecasters.

The Jack Cup and String Ferrules 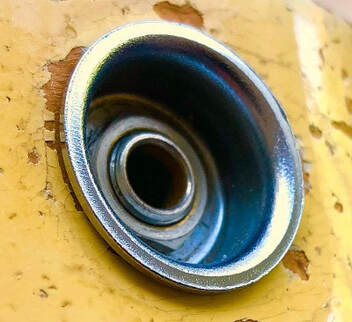 Photo Courtesy Eddie Tatton
The standard output jack was a mono jack made by Switchcraft.  Esquire, Broadcaster and Telecaster guitars featured a heavy milled jack cup, which was machined and knurled by Edmiston using cold rolled steel.
After late 1952 cups were made of pressed steel and screwed onto a small drilled plate which was anchored to the body’s jack route.
​Fender Telecaster-style guitars string ferrules were machined by Edmiston from cold rolled steel rods and nickel plated.
String ferrule holes were protruding and were not countersunk on prototypes, pre-production and earliest production guitars.  These holes were drilled using temporary body templates and were often misaligned.
Guitars made between mid-1950 and 1966 had countersunk and flush with the body string ferrules.
After 1966, the ferrules are clearly protruding on the back of the body, but after the 1985 buyout Fender reverted to flush ferrules.


MASKING TAPE MARKINGS
Guitars manufactured between mid-1951 and 1956 usually featured a date penciled on a piece of masking tape, located in the control cavity.  These tape inscriptions were affixed either on the side or on the bottom of the cavity routing and marked the wiring harness were installed into the body.  Therefore, they usually were the last date found on a Fender guitar.
Most of these inscriptions were signed with female first names such as Mary, Gloria, Virginia, Barbara or Carolyn.

In the early days, Leo Fender bought the screws from readily available stock, and therefore he used many different types of screws on prototypes and pre-production guitars.
All the 1950 Telecaster-style guitars featured slot heads screws, including the adjustable truss rod bolt.  In 1951, Fender started a gradual transition towards Phillips heads screws, but the transition was completed by the end of 1953, because Leo Fender didn’t want to waste anything.
In the course of 1951, the controls plate and the strap buttons changed to Phillips heads.  The four screws holding the bridge base plate changed to Phillips head in early 1952, whilst pickguard screws in late 1952.  Until the summer of 1953 Phillips head could be still used for holding the bridge pickup and the selector switch.