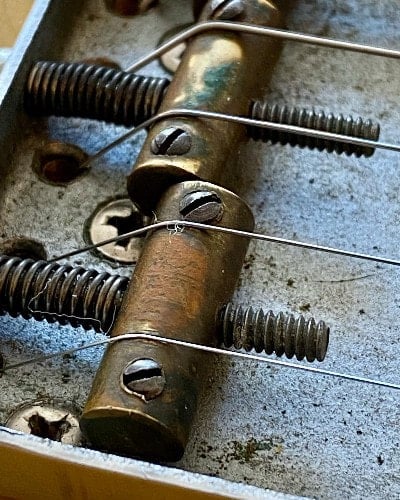 With the exceptions of the guitars equipped with a Bigsby vibrato tailpiece, all Esquires, Broadcasters and Telecasters were fitted with the original bridge assembly featured in the patent filed by Leo Fender in January 1950.
Strings were anchored in ferules inset into the back of the guitar and passing up through holes in the body and through the bridge plate, where they took a right-angle turn over three bridge saddles.
In late '58, the strings-through-body pattern was suspended and replaced for about a year by a top-loading system.  On “top loader” guitars, the strings were no longer run through the body, but blocked directly on the plate.
​When Fender came back to the original string-through-body pattern, the warehouse inventory of top loader bridge plates was re-drilled with six string holes in the base plate.  Hence, late 1959 and 1960 Telecaster bridges usually featured a base plate drilled for both loading systems.
In 1983, the original bridge assembly was discontinued, but a replica was used on the Vintage Reissue model.  To avoid any confusion with the original bridge assembly, the base plate of the '52 Vintage Reissue Telecaster featured a small dot stamped below the third number in the serial number. 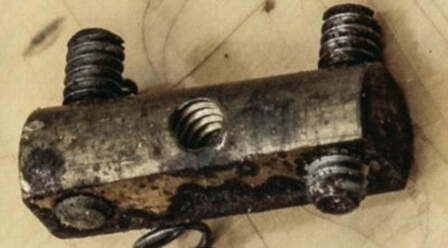 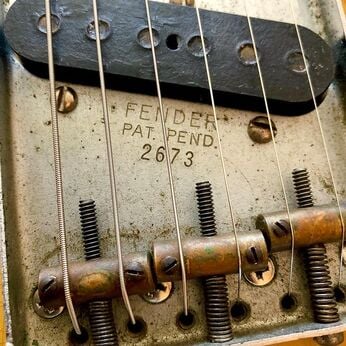 1952 bridge plate markings, Courtesy of Eddie Tatton
Esquires, Broadcasters and Telecasters base plates were machined using Race & Olmsted blanking press and forming die.  They were anchored to the body with four mounting screws, although the snake head prototype featured a base plate with three mounting screw holes and open corners.
Between 1950 and late 1954, the base plate sported the instrument's serial number stamped below the “FENDER PAT. PEND.” marking, even though the patent was approved only on 30 October 1951!
​After late 1954, the serial number was moved on the neck plate and the base plate simply sported the “FENDER PAT. PEND.” marking.
Beginning in 1962, the plate was stamped with “FENDER PAT.NO. DES 164227 2,573,254”.  These markings remained on the base plate until 1983, with the exception of the '70s six-saddle bridge, which featured only the “FENDER” brand-stamp without any patent number mention.

Until mid-1983, Esquire and Telecaster bridge featured a metallic cover, often used by guitarist as a portable ash tray.  Since a wire was soldered to the early '50s snap-on cover as a contact for electro-plating in the old days, these units were characterized by a distinctive solder drop (or its mark) on the inner face.  Later covers didn't sport any solder drop on the inner face because these unites were snapped on racks with spring clips for plating.
The snake head prototype featured a slide-in cover, whilst the cover of the second prototype was anchored to the body with two screws. 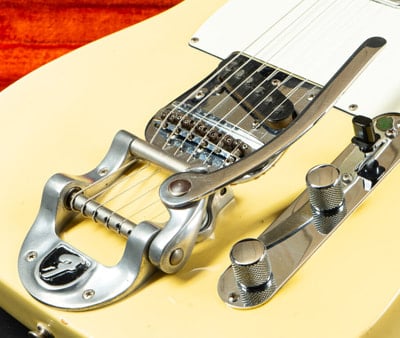 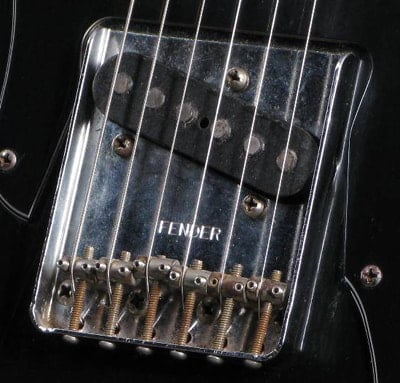 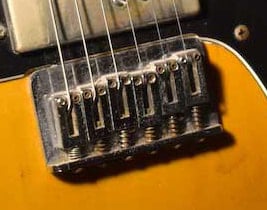 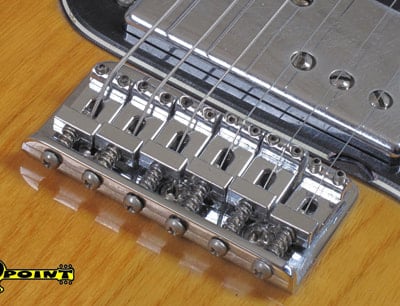 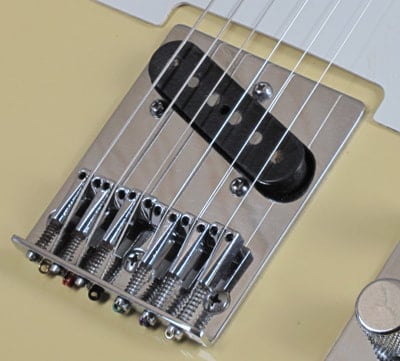 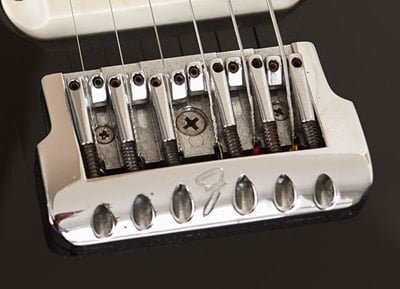 In the early days, Leo Fender bought the screws from readily available stock, and therefore he used many different types of screws on prototypes and pre-production guitars.
All the 1950 Telecaster-style guitars featured slot heads screws.  In 1951, Fender started a gradual transition towards Phillips heads screws, but the transition was completed by the end of 1953, because Leo Fender didn’t want to waste anything.
The four screws holding the bridge base plate changed to Phillips head in early 1952.