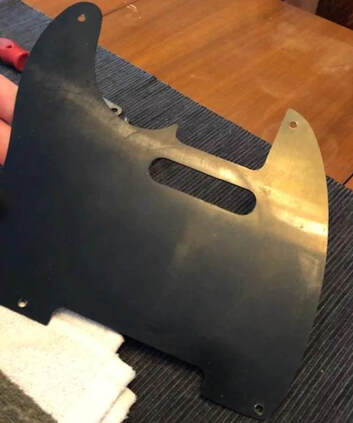 The first two prototypes were fitted with slight different one-ply three-hole wing-shaped pickguards made of black phenolite, which both appeared to have been crudely cut without using a template.
Pre-production guitars sported larger four-hole phenolic pickguards, which featured a pointed edge on the cutaway area near the neck junction and appeared to be cut using a rough guide.  They could be both black or white as the one used on the black pine-wood body Esquire shown on the April 1950 catalog.
After May 1954 Fender started using one-ply white pickguards made of PVC on Telecaster and Esquire guitars, although Leo used some black phenolite sheets leftovers after Summer 1954 and Don Randall continued to show a black guard on 1950s advertising flyers because he believed it was more photogenic.  PVC was easier to work with and less expensive.
In mid-59, the new Telecaster Custom was fitted with a new three-ply white pickguard (W/B/W) made of celluloid, often called nitrate guard.  Celluloid, which was imported from Italy, even when brand new showed a greyish/greenish (a.k.a. “mint green”) tint.  With ageing, the front face became even more greyish or greenish.
The very first three-ply pickguards were still fastened by five screws, but by Summer 1959 all Telecasters pickguards were mounted on the body with eight screws, whether one-ply or three-ply.  By the end of 1963, Fender switched to three-ply celluloid guards on the regular Telecasters, too.
After 1964, highly inflammable nitrate guards were discontinued on safety grounds and Fender replaced them with real white plastic units, although few nitrate guards were rarely used later.

Comparison between a '51 black pickguard and a '73 white pickguard. Courtesy of Cesco's Corner and True Vintage Guitar
By 1976, the regular Telecaster was fitted with a three-ply black pickguard, but, during 1981, a three-ply white guard was reinstated.
In mid-83, the new Standard Telecaster featured a one-ply white guard.  At first, it was fastened by eight screws, but Fender switched soon to five screws.
3-Ply 8-hole white pickguards were later resurrected for the American Standard.

All the 1950 Telecaster-style guitars featured slot heads.  In 1951, Fender started a gradual transition towards Phillips heads screws, but the transition was completed by the end of 1953, because Leo Fender didn’t want to waste anything.
The pickguard screws changed to Phillips heads in late 1952.