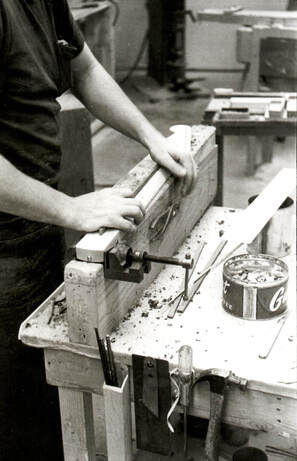 There are three ways to attach a neck to a guitar: neck-through (or through-body), set-neck and bolt-on.  Fender instruments have almost always used a bolt-on neck attachment design, the most convenient to adjust, repair or replace.  Neck is inserted in a pre-routed pocket in the body and joined using four or sometimes three screws.  A rectangular metal plate (neck plate) is used to secure the joint and re-distribute the screw pressure.  It was produced with a 16 gauge cold rolled steel to which boron was added for surface hardening.  Neck plates used on early prototypes were smaller, because the tooling for the final plate was invoiced on April 26, 1950.​

Truss rod walnut plug, neck section
With the advent of a separate rosewood fretboard the truss-rod installation was modified, because it was easier to drill the rod channel in the neck prior to glueing the fretboard.  This explains why rosewood-capped (and maple-capped) necks were devoid of the skunk stripe and of the walnut plug.
In early 1969, the original one-piece fretted maple neck was reinstated as an option in lieu of the maple cap board on Telecaster guitars.  By then, Fender would have had to deal with two methods of installation of the truss rod, from the front and from the rear.  In order to optimize production, only the installation from the rear was retained, and this is why rosewood-capped necks made after Spring 1969 usually featured the skunk stripe and the walnut plug above the nut.

Thanks to the micro tilt the neck angle could be adjusted via a smaller wrench inserted into the lower hole below the screw of a new 3-bolt neck plate (on which the huge Fender “F” and the serial number were stamped). At the same time the truss-rod could be adjusted via a wrench inserted into a metal bullet located above the nut, without disassembling the neck, hence the name bullet truss rod.
The metal disk at the base of the neck was initially housed in a route which surrounded it perfectly. Since ca. 1976, the route was lengthened to reach the end of the neck.
Despite these changes, the truss-rod was still inserted from the rear and this explains the presence of the stripe.

In early 1983, Fender introduced the very new BiFlex truss rod, which could be adjusted in both directions (concave and convex), via a bolt buried in a small well above the nut.  It was first fitted to the 1983 Elite and Standard models.  At the same time the micro-tilt was re-introduced, but this time with a 4-bolt neck plate.