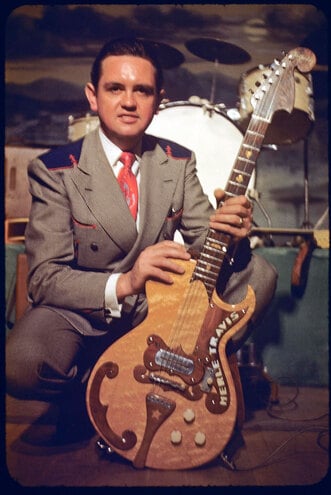 In the first half of the 1900s, with the birth of the swing and jazz bands, guitarists more and more felt the need to compete with the volume of other instruments.  In order to meet this need and cope with louder and louder music, bigger guitars with reinforced necks or metal bodies started to be made, and the first pickups and the first Spanish hollow-body electric guitars appeared.
However, at loud volume levels, these hollow-body instruments would generate feedbacks and ugly sounds, preventing guitarists from emerging in orchestras.  They were also extremely expensive and demanded a long time to build, so musicians and inventors started to try their hand at developing the first solid-body Spanish electric guitars.
In 1934 George Beauchamp, who had worked with Dopyera on developing the National, filed a patent for a Hawaiian full-body electric guitar with a rounded shape, the Rickenbacker A-22, called Frying-Pan.  In 1935, he built a Spanish electric guitar, the Bakelite Model B Spanish Guitar, whose small body was made of Bakelite.  This guitar, although not completely a solid-body, put an end to the problem of feedbacks.  It was extremely heavy and went out of tune easily, and the position of its pickup made it uncomfortable to play.
Lloyd Loar, a musician become popular for inventing the Gibson F-5 mandolin and the well-known L-5 in the 1920s, had founded Vivi-Tone together with Lewis Williams in 1933, and in the mid-1930s manufactured at least a couple of solid-body electric guitars.  However, they were unsuccessful as their sound left a little to be desired.​​
In the mid 1930s, Slingerland manufactured the Songster 401, a solid-body Spanish electric guitar, and the 400, the lap steel version.
In the 1940s two musicians, Les Paul and Orbra Wallace Appleton, unsuccessfully approached Gibson proposing their solid-body guitar models and Merle Travis designed a solid-body Spanish electric guitar that Paul Bigsby manufactured and completed in May 1948.
However, it was Leo Fender who began the actual large-scale production of Spanish solid-body electric guitars and who made them become a mass phenomenon.  As Leo stated, success does not necessarily have to be in inventing something totally new, but also in perfecting an already existing project.