IN THE FOOTSTEPS OF THE VINTAGE: CLASSIC, CLASSIC PLAYER, ROAD WORN AND VINTERA 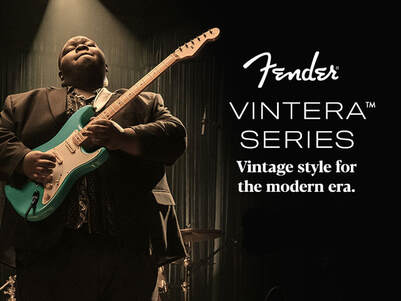 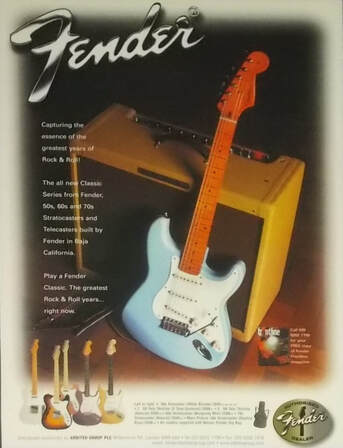 Classic Series 1999 Advert
In 1999 the cheap made in Mexico Classic Series, destined to a success far beyond expectations, whose guitars reprised the main features of the '50s, '60s and '70s, took the place of the Japanese  Collectables.
The '50s Stratocaster, '60s Stratocaster and '70s Stratocaster all had pickups in Alnico with staggered poles, vintage style bridges (also the '70s had bent steel saddles), 7.25" radius fretboards and vintage style frets. In addition, the '50s and '60s had a 4-bolt neck plate, small headstock with Spaghetti Logo, and the '70s, obviously, featured a 3-bolt neck plate, big headstock with Black CBS Logo and bullet truss rod.
The '70s had an ash body, while the '50s and '60s had a poplar one until mid 2002, when it was replaced by alder (already used for the sunburst finish).
In the summer of 2013 the polyester finished Classic Stratocaster was joined by the nitro finished ​'50s Stratocaster Lacquer and '60s Stratocaster Lacquer.
Also in the Classic Series, like in other Mexican series, rosewood was replaced by pau ferro in mid 2017, as a consequence of the more restrictive rules imposed by CITES.

In 2006 Fender introduced the Classic Player '50s Stratocaster and the Classic Player '60s Stratocaster: this Mexican series, drawing from Custom shop know how, was inspired by the vintage Stratocasters, to which Fender added a pinch of modernity: larger frets, almost flat fretboard, and a 2-point bridge with vintage style saddles.
Original ’57/’62 single coils (central reverse wound/reverse polarity to reduce the hum) and vintage style locking tuners were used for the '50s.  The '60s featured three Custom '69 Single-Coil Strat Pickups with Grey Bobbins; these pickups had the same specs and were fabricated using the same materials as the Custom Shop ’69 pickups, but weren’t built, like those, in the Custom Shop.  The pickups of the first Classic Player ’60 were usually dated by hand and “AY” signed, but weren’t hand-wound by Abigail Ybarra.  In both guitars the pickups were controlled through a special five-way switch that provided a combination neck/bridge in the position 4.
This series created a lot of confusion due to the neck plate’s engraving "Custom Shop Designed", which led many inexperienced guitarists to believe that they had in their hands a Custom Shop guitar... made in Mexico! Indeed the Classic Player Custom Shop existed (1998-2005), but it was a completely different guitar.

Always in the wake of the vintage, in 2009 Fender unveiled the ​Road Worn Series, composed of the Road Worn '50s and the Road Worn '60s Stratocaster, cheap versions of the “relic” custom shop counterparts, but well done anyway: nitrocellulose finish (without poly undercoat), 6105 frets, three Tex-Mex pickups and aged plastic. “Beaten, bruised and even burned,” as specified in the Fender catalog.
Between 2011 and 2012 Fender also made the Road Worn Player which, as the name says, were more player-friendly and closer to the needs of the guitarists.  While maintaining a lived-in look, they had a flatter fretboard and a thinner neck.  The HSS model featured two Texas Special single coils and a Seymour Duncan Pearly Gates Plus humbucker.
​

Christone Kingfish and Vintera Stratocaster, 2019 advert
In the summer of 2019, the Vintera Series, whose name probably referred to the “vintage style for modern era” motto, took the place of the Classic and Classic Player ones, by entering the made in Mexico Stratocasters catalog with low-cost models that reprised the main features of the '50s, '60s and '70s, reproducing classic finishes and historically correct necks.
These guitars were joined by the Vintera Modified models, available in the '50s and '60s versions, closer to the needs of the guitarists thanks to the Modern “C” shaped neck, 9.5" radius fretboard and medium jumbo frets, to which were added new tone possibilities, such as the S-1 switch gave the option of activating the neck pickup in positions 1 and 2.  Pickups had been redesigned by Tim Shaw to imitate the peculiar tone features of the respective reference periods, while those of the Modified versions had been changed to provide a higher output.
When Fender replaced the Classic and the Classic Player Series with the Vintera guitars at Summer NAMM 2019, relic'd Road Worn finishes were conspicuous by their absence.  But it was only a matter of time before Fender announced these new Road Worn models under the Vintera banner.
The Vintera Road Worn '50s Stratocaster and Vintera Road Worn '60s Stratocaster, unveiled in August 2020 and available from 10 September, not only shared identical specs to the previous year's Vintera Series, but the new aged finishes, that added some vintage flair to each model, seemed to have been given an upgrade as well, thanks to the tasteful lacquer checking and more vintage-correct wear.